This website requires certain cookies to work and uses other cookies to help you have the best experience. By visiting this website, certain cookies have already been set, which you may delete and block. By closing this message or continuing to use our site, you agree to the use of cookies. Visit our updated privacy and cookie policy to learn more.
Home » Park Service Plan Underway to Repair, Raise D.C.-Area Seawalls
NewsProjectsMidAtlanticMid Atlantic Construction ProjectsSustainabilityEnvironmentGovernment
Federal Construction

The National Park Service is moving ahead with plans to repair, rebuild and raise aging and crumbling seawalls in Washington, D.C., including landmark areas around the Tidal Basin—the site of the Jefferson Memorial and Japanese cherry trees, whose springtime blossoms annually draw throngs of visitors.

Under a $5.7-million task order from the park service, a team of HDR and Moffatt & Nichol is working on design and other early stage work for an initial segment of the project.

The task order is part of an indefinite delivery/indefinite quantity contract awarded to the joint venture in April.

In all, plans call for rehabilitating about 5.4 miles of seawalls along the Potomac River and the Tidal Basin. 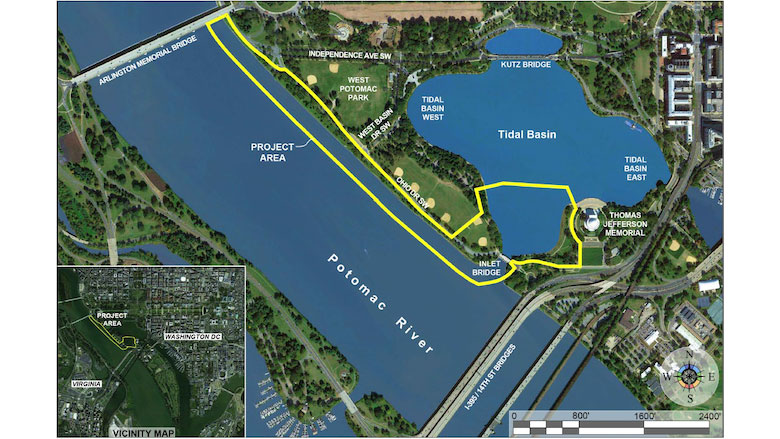 The first project under the HDR-Moffatt & Nichol ID/IQ contract is for rehabilitating and reconstructing 1.6 miles of seawalls around the Tidal Basin and along the edge of nearby West Potomac Park, HDR Program Manager Kent Brogger told ENR via email.

According to a park service presentation for a July 19 public-scoping meeting—part of the environmental assessment and historic preservation process for the project—the targeted contract award and construction period extends from about mid-2023 to 2027. The Tidal Basin section of the construction is to be completed in early 2025 and construction on the West Potomac Park section is to extend beyond into 2026.

Parts of the seawall date from the late 1800s, according to the HDR-led joint venture. Some sections were replaced in the 1930s and 1940s.

The joint venture says parts of the walls have since settled by as much as 5 ft and are overtopped daily.

Plans call for raising the seawalls by several feet. The park service also aims to salvage and reuse stone from the existing historic walls to build the higher new ones. Other tasks include replacing the sidewalk atop the seawall along the Tidal Basin; rehabilitating the landscape; and repairing infrastructure, which may include grading and improvements to pedestrian and multiuse paths.

The project’s funding comes from the 2020 Great American Outdoors Act, which authorizes up to $9.5 billion over five years for projects that would reduce the backlog of infrastructure maintenance needs in national parks and on other federal lands.

The funds come from revenue from royalties the federal government receives from oil, gas, coal and renewable-energy production on onshore and offshore federal lands.

Under the statute, 70% of the total funding, or up to $1.3 billion per year, goes to the park service.