Paradise Gray, a founding member of hip hop group X Clan, spoke to camera crews recently at the Bronx Terminal Market about the latest exhibit of the Universal Hip Hop Museum’s temporary space. Sporting gray dreadlocks and a fine stepping cane, the museum and performance center’s chief curator talked about “The Revolution of Hip Hop” physical and multimedia displays celebrating the music genre, which originated in the South Bronx in the 1970s.

Just across the street, on the other side of the New York City borough’s I-87/Major Deegan Expressway overpass, the museum’s permanent home was being constructed, along with 542 units of affordable housing as part of the $349-million Bronx Point mixed-use project. When asked about his excitement for the exhibit and the project, he proclaimed: “If this doesn’t get you hyped, you’re dead!” 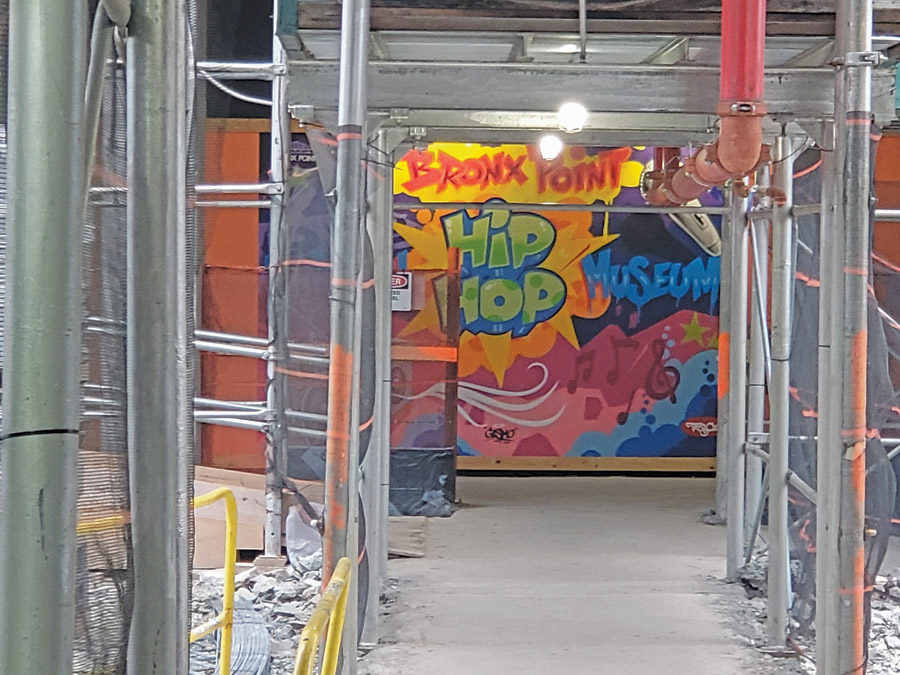 The entrance to the Universal Hip Hop Museum’s permanent home is part of the Bronx Point mixed-use project.
Photo by Eydie Cubarrubia

The hype goes beyond the museum, with the 530,000-sq-ft Bronx Point offering amenities for the modest income community that birthed the movement. The building comprises 22 stories of residential, retail and community spaces, including a Bronx Works pre-K and programs by CityScience, which promotes STEM training for urban youths.

The waterfront site along the Harlem River across from Manhattan will also offer almost three acres of public outdoor space that includes a lighted esplanade and park with jogging paths, a much needed playground for the neighborhood, barbecue areas, restored marsh, and lush landscaping of trees and native vegetation. A gateway plaza under the Major Deegan between the Terminal Market and the new development will connect the latter to the wider community. 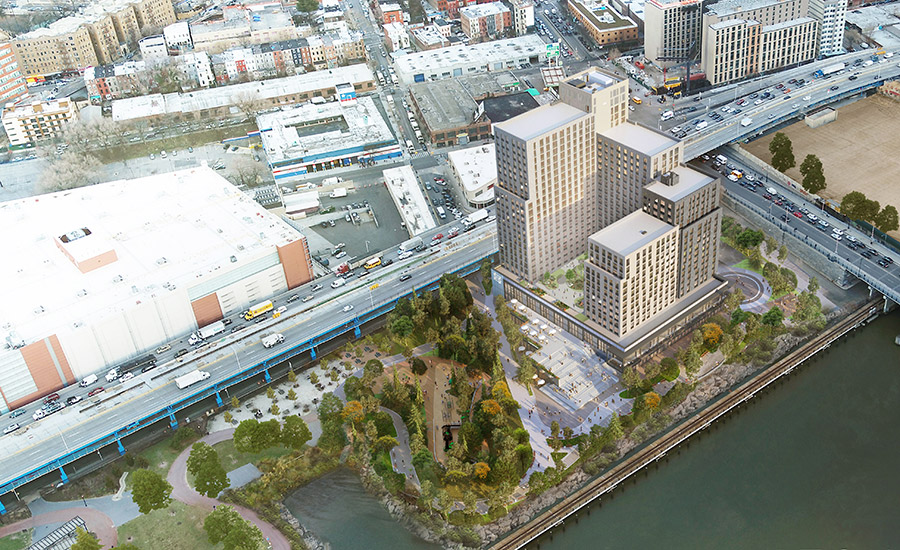 A former brownfield in the Bronx, N.Y., is becoming home to more than 500 affordable housing units, a sorely needed esplanade and park for the public as well as the Universal Hip Hop Museum.
Rendering by Marvel

“The park and esplanade are very important to the city,” says Josue Sanchez, senior director at L+M Development Partners, co-developer of Bronx Point along with Type A Projects. L+M received the contract from New York City after responding to its RFP in 2016. L+M closed financing in December 2020 and broke ground the next year.

Out of the $349 million raised, $323.5 million is for the building. Funding comes from private sources such as Wells Fargo, and from public entities that include New York City’s Housing Development Corp. and Dept. of Housing Preservation and Development. The city’s Economic Development Corp. provided $25.5 million for the esplanade.

The $80-million museum is partly funded by a $3.75-million state grant, $11 million allocated by the New York Assembly, and a combined $6.2 million from the capital funds of former Bronx Borough President Ruben Diaz Jr. and current President Vanessa Gibson, according to local reports. It will rent space in the building “for a nominal fee,” Sanchez says.

“Maximizing the number of units was very important, but we wanted to add something else to be a magnet to get people” to visit a part of the borough they might otherwise not, says Sanchez, a Bronx native. He and his colleagues thought a hip hop museum would “create a buzz and excitement, not just for the Bronx but for NYC as a whole,” he says. 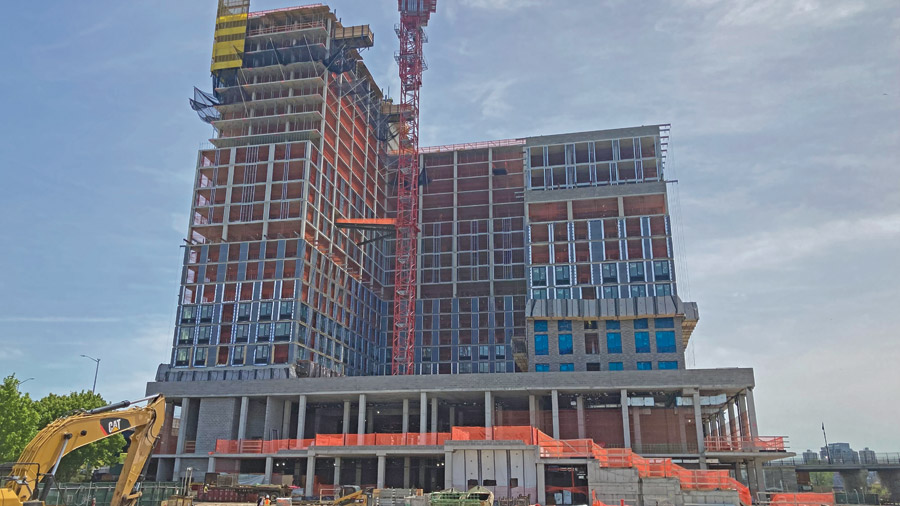 Many people had similar ideas for such a museum. But Sanchez says Rocky Bucano, its executive director and president, “was far ahead” with key connections in the music industry and to universities like Massachusetts Institute of Technology and corporations such as Microsoft, which both are providing technology support.

While serving as executive director of the New York Gauchos youth basketball nonprofit, Bucano found that partnerships to expand that program did not work out, but they did spark the idea for a music program—“the genesis of how we got started,” he says. For a while, Bucano could not get the right real estate developer to bite. Then L+M reached out and asked him to partner on the RFP.

“Here we are six years later, and construction is basically coming to a close, and the museum is set to open in 2024,” said Bucano, a veteran music and television executive, one week after the building’s topping off ceremony in May 2022. 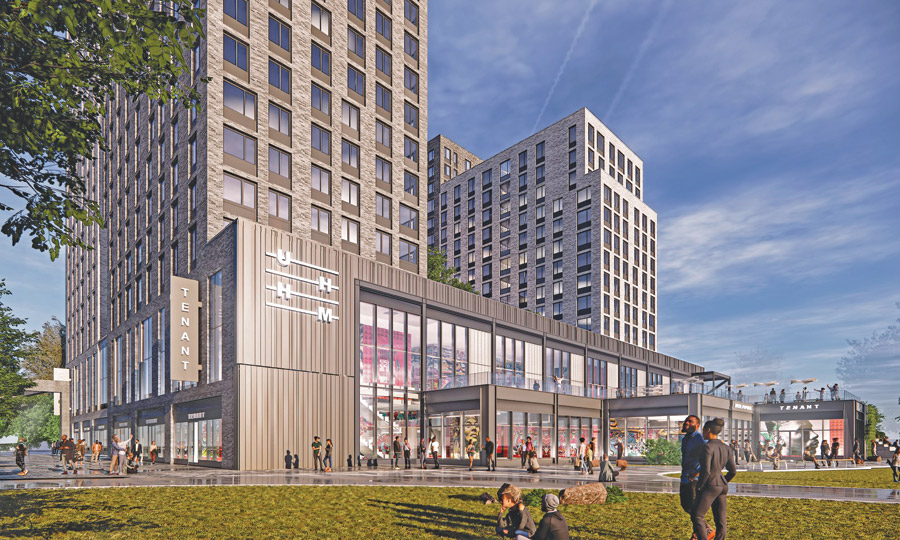 The Universal Hop Hop Museum will be the cultural anchor of Bronx Point, located near hip hop’s birthplace in the New York City borough.
Rendering by S9 Architects

Dating to the 1890s, the brownfield site had housed a sawmill, machine shop, coal yard, electric utility and freight yard, according to a May 2020 document from the New York State Dept. of Environmental Conservation.

The nearly 195,000-sq-ft site had to be remediated before construction of the building, esplanade, park and plaza began, says Bernadette Amarosa, L+M construction project manager. “We started in about late January-early February 2021, and we got our brownfield certification at the end of 2021,” she says. 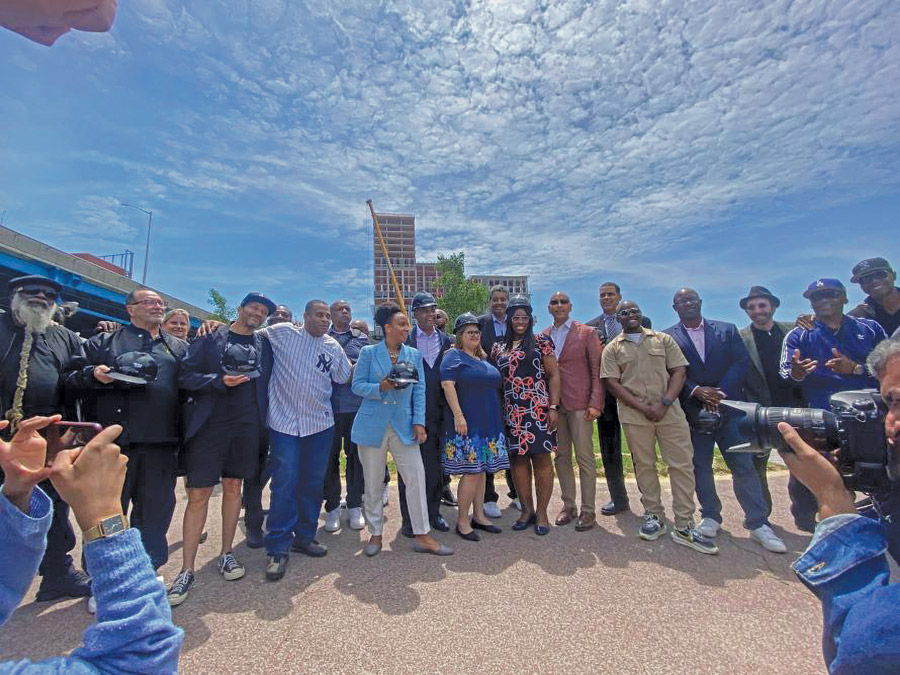 Amarosa says the team excavated 2-ft-deep “historic fill” from across the entire site, with some 26,700 cu yd of contaminated soil removed and replaced by clean fill. She says contractor ECD was brought into the project earlier in the process to begin pile work for the foundation during remediation and soil testing.

“It was a good coordination effort between us, Langan and UAG, which basically managed the process,” Amarosa says.

Bronx Point’s main structure is a 269-ft-tall concrete tower that has a brick facade with a glass and aluminum curtain wall system at the podium, the location for the hip hop museum. The second story will be a landscaped terrace for residents, with floors 3 and up allocated to affordable residential units for renters who must earn between 30%-100% of area median income to qualify.

With the building topped off, “we’re getting [it] watertight, the windows installed and starting brick work,” says Amarosa, adding that the tower is expected to be fully enclosed by winter. Masonry and exterior insulation workers on the job at the same time and at high floor levels makes “working safely my biggest concern right now,” she says. “There are a lot of trades at these elevations.”

But the large and mostly isolated site—bounded on the north by Mill Pond Park, on the west by the Harlem River and on the east by the 145th Street bridge, with no immediately adjacent buildings—was also a blessing, Amarosa says. “One of the luxuries was, we had all this room to spread out. Trades loved it!” 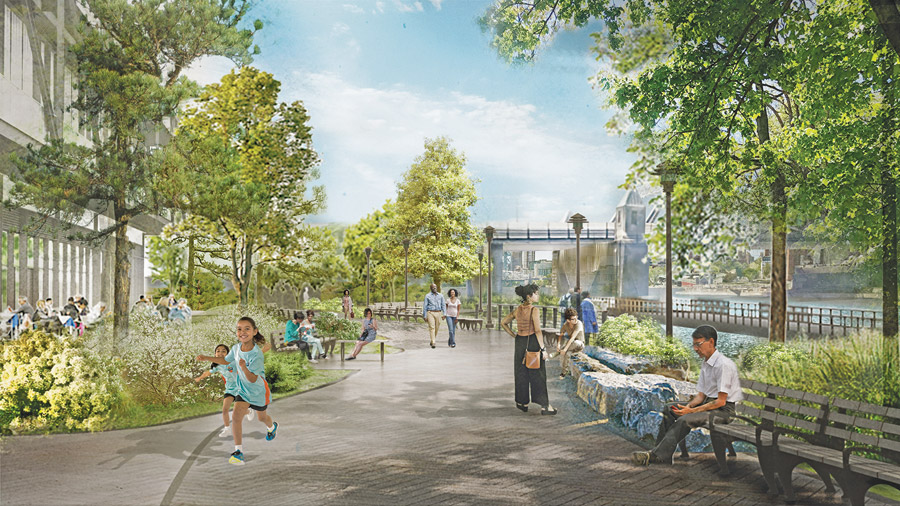 The open space also proved key in design of project elements to benefit the community. Yadiel Rivera-Diaz, a partner at Marvel, says he’s “very proud” of how team members gathered ideas. “We established a very robust community engagement process,” he says. This included spending time “sitting in” and directly engaging users of Mill Pond Park, which will be connected to the new one; the latter will be managed by the city’s Parks & Recreation Dept.

“We attended, purposely, all conversations surrounding the building,” says another Marvel partner, Tyler Silvestro, noting that gaining the insights was important because “we were providing design for public impact spaces.”

“What normally happens in community engagement is, some people show up and are very vocal,” Rivera-Diaz explains. “It paid off because everything the community wanted got translated into the design,” he says, including a playground, closer proximity to the water and more trees and native vegetation, 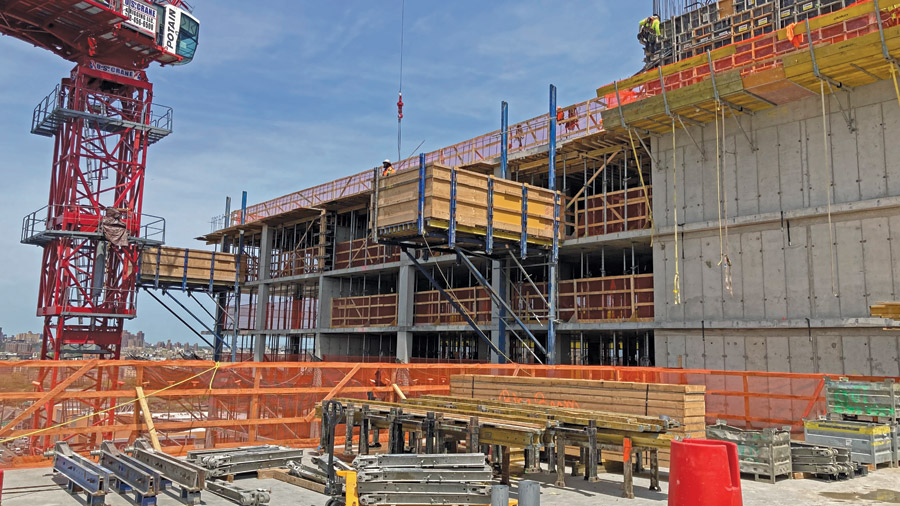 To make landscaping “very resilient” and ensure that views were not impeded by a sporadically used rail line along the river, Marvel’s team had to raise the park’s elevation so visitors could see over passing trains. Other park surfaces will be permeable, to percolate rainfall rather than dump it. “That’s not common in New York City parks” because of extra maintenance required, Rivera-Diaz says.

He adds that the project could have impact far beyond the Bronx because of its status as the first 100% affordable housing project nationally that has been certified by the Waterfront Alliance as meeting its Waterfront Edge Design Guidelines (WEDG), similar to LEED but used for waterfront projects.

“Think what it can do for the health and cleanliness of urban waterways, and also how it can be educational for kids who don’t necessarily think the water is for them,” Silvestro adds. He says the “sheer volume of trees” to be planted “is now part of the zoning code” for similar projects.

Marvel also designed a lighted gateway plaza without flora, which creates the walkway beneath the Major Deegan to connect the Bronx Point project to the Terminal Market and the rest of the borough.

To transform the dark, gritty corridor under a highway overpass where plants would not survive, Marvel “created a carpet space that has a beautiful pattern and seating areas with an array of light,” Rivera-Diaz says, as well as areas for food trucks, art exhibits and weekend markets. The space also leads to the Universal Hip Hop Museum’s entryway.

Museum executive director Bucano says his team toured other cities such as Atlanta and Detroit “to speak with people, even those who are not even fans … to see what they expected from a museum about hip hop culture.”

They met with museum architects to come up with lead concepts that will celebrate elements of hip hop “in a unique, technology driven and immersive kind of way” so that “people won’t feel like they’re walking into an old relic,” Bucano says. The museum team has partnered with Microsoft and D. Fox Harrell, an MIT digital media and artificial intelligence professor, to create virtual reality, mixed reality and other high-tech displays.

“It’s a reinterpretation of a traditional museum space,” says Rio Rocket Valledor, project director and senior exhibition designer at Ralph Appelbaum. “A remix, if you will.”

The so-called “smart museum” requires specific infrastructure, such as environmental and preservation controls necessary for exhibits of clothing, records, show fliers and other “cultural artifacts that people have never seen before, objects that have real value and power for a lot of people,” notes firm partner Nick Appelbaum.

“In the early concept phases and the years since then, we’ve been engaged with L+M, Type A and S9 Architects to deliver our best guess of what we would need,” Valledor says. “We put in our requests for the infrastructure, and it’s all now in the building.”

Fit-out is just beginning, the architects say. While spaces will be changeable, especially to accommodate live performances, they still had to design an approach to “fit the right amount of story” into a finite space.

The visit to the hip hop museum’s temporary quarters indicated what exhibits may look like. One portion recreates the sounds and lighting of the Tunnel nightclub in Manhattan’s Chelsea area that featured hip hop music during the golden age of the mid-1980s through the early 1990s. Another display comprises giant screens imitating city business doorway shutters adorned with faux graffiti urging, “Keep It Pushing,” with QR codes a visitor can scan to learn more after watching and listening.

“I started as a DJ in the ’70s and was a record executive for 40 years, and this is the greatest project I’ve been involved with,” Bucano says. “Every day I wake up, I feel overjoyed because this project has been truly blessed.”