Michael Russell Builds for the Future

It’s easy to feel the impact of a structure like the Smithsonian National Museum of African American History and Culture in Washington, D.C.

What’s not as easy to fully comprehend are the ripples of economic prosperity in business ownership, incomes and general well-being in a community. It’s harder still to see how the two overlap.

In the middle of that Venn diagram of impact are people like Michael Russell, CEO of Atlanta’s H.J. Russell & Co. and ENR Southeast’s 2022 Legacy Award honoree.

“I think it sums Michael up that on one side of the equation his firm is building very important things in our community, but on the flip side, it also is a true example of a company that walks the walk and puts things back into our community,” says Larry Gellerstedt III, chairman of Grady Memorial Hospital Corp. and former president and CEO of Cousins Properties.

Gellerstedt has partnered with H.J. Russell and Co. on several big-ticket Atlanta projects, on real estate deals and has been involved with some of the firm’s many civic activities.

One project they’re working on shows how that line between building structures and building community can blur or disappear entirely: Grady Hospital.

H.J. Russell is currently working as part of a joint venture on a $160-million expansion at the hospital, and Russell was one of a handful of leaders who took on what Gellerstedt called a thankless and politically sensitive job in getting the project back on track. 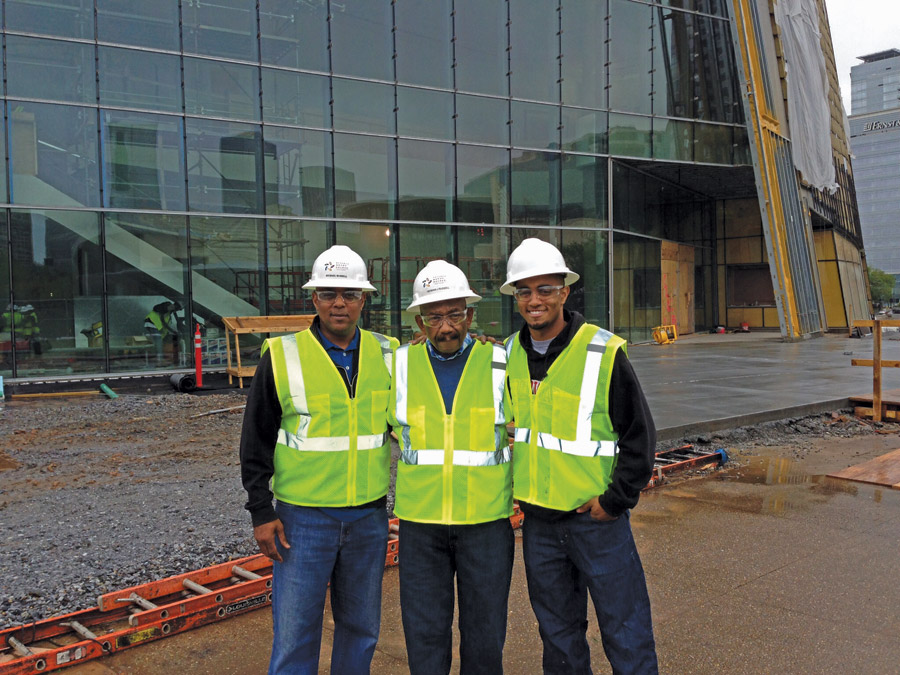 “There was a lot of built-up frustration on all sides,” he says. “The architect and contractor each felt the other partner was not fulfilling their obligations. There was a tremendous amount of letter writing going on.”

After a phone call from Gellerstedt, Russell brought project leadership together and took the conversation beyond the project level to philosophies and goals, he says. He kept emotion out of it and helped get the project back on track.

That example shows a common theme from Russell’s colleagues, who describe him as a leader who’s steady, even-keeled and humble, and who’s seeking to make an impact outside the spotlight.

“He’s not in the credit business,” Gellerstedt says. “As a matter of fact, Michael’s so quiet and humble, sometimes people forget he was there, and that’s the mark of a true leader.”

For Yasmine Murray, chief operating officer for H.J. Russell, that even keel showed itself as the company weathered the Great Recession from 2008 all the way through 2014 and again as the COVID-19 pandemic brought new problems.

“I came on board at a time when the company was really challenged financially; morale was low,” says Murray, who started with the company as a paralegal, went to law school and came back to the company eight years ago. “He was very supportive of me throughout my time at Russell, really allowing me to earn my seat at the table, trusting me as a valued adviser.”

Carving His Own Path

“I’m part of a legacy company that’s 70 years old, so I grew up around the industry,” Russell says.

He worked with developer and architect John Portman early in his now 30-plus-year career and moved up through various positions within H.J. Russell since he started there in 1990.

Taking over as CEO in 2003, Russell stepped into some big shoes.

His father, an entrepreneurial legend and power for good in the Atlanta community and within the Civil Rights movement, died in 2014. His shadow is long, but Michael Russell casts his own. 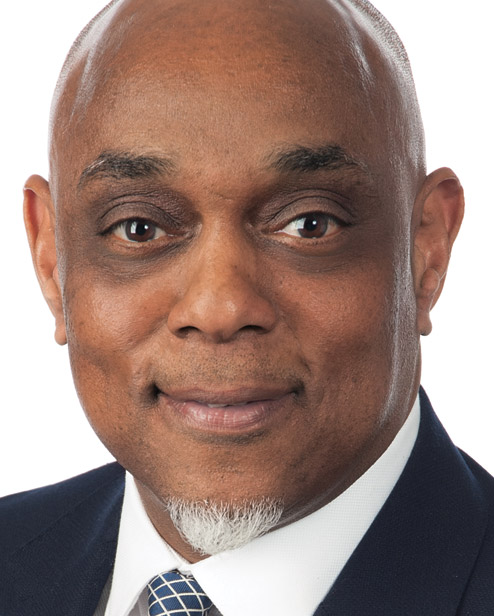 “It’s not just responding to a request from a nonprofit. It’s really saying, ‘Hey, how can we be impactful in this community.’”
—Michael Russell, CEO, HJ Russell & Co.

Today, Russell says, “I think I’ve got a pretty good outlook and a pretty good viewpoint of what it takes to lead an organization.”

The highlighted projects on Russell’s resume include the $850-million Dallas/Fort Worth International Airport Terminal Renovation and Improvement Program and the $1.67-billion Mercedes-Benz Stadium in Atlanta.

It’s the impactful projects that Russell says he’s most proud of, and the National Museum of African American History and Culture comes to the top of that list. It’s something he knows his grandchildren will visit one day, and something he’s proud to know he and his company helped bring to fruition. Mercedes-Benz Stadium, which he called a once-in-a-lifetime opportunity, Grady Hospital in Atlanta and Centennial Olympic Park are also in that category.

“Being a part of a project that has been so instrumental in the redevelopment of an area is something that I’m very proud of,” Russell says.

Reaching Beyond the Industry

The company’s social responsibility arm, Russell CARES, supports a wide range of initiatives like the annual Russell Rocks the Block events. It’s in the company’s core culture, Russell says: a deliberate philanthropic effort to provide different kinds of support to organizations in Atlanta.

From his parents, who Russell says “always were about giving back,” he learned “how they felt an obligation” to contribute to their local community—a lesson also learned by his brother and sister. “We all have that common objective.”

The ethos is that to whom much is given, much is required. The city’s been good to the company, and Russell feels obligated and motivated to make a difference in Atlanta. 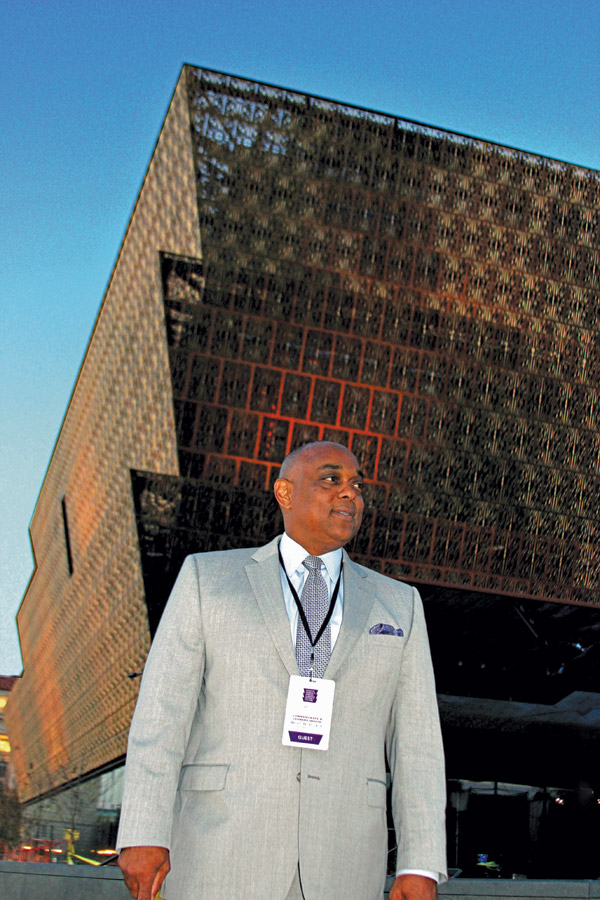 Michael Russell lists the Smithsonian National Museum of African American History and Culture in Washington, D.C., among the projects of which he’s most proud.
Photos Courtesy H.J. Russell & Co.

“It’s a culture too,” he says. “It’s deliberateness. It’s not just responding to a request from a nonprofit. It’s really saying, ‘Hey, how can we be impactful in this community?’”

A big part of that for Russell, and for his sister Donata Russell Ross and brother H. Jerome Russell Jr., who sit on its board, is the Russell Innovation Center for Entrepreneurs, a business incubator connecting Black entrepreneurs with banks and investors.

“Being an African American-owned company with the background scale we have, we can inspire others that a company like Russell is possible, inspire other minority engineers and contractors to continue to strive and grow, and we want to be a positive influence to growing other businesses in communities where we work,” Russell says.

The Russell Center carries on the entrepreneurial legacy of Herman Russell, who brought employees up through “H.J. Russell University,” but in a way that’s unique to their generation. Russell says his brother Jerome was the catalyst behind the nonprofit.

“If you look at the leading Black businesses in Atlanta today, they all worked for H.J.,” Gellerstedt says, naming Integral Group’s Egbert Perry, the late Noel Khalil of Columbia Residential and T Dallas Smith of T Dallas Smith and Co. “These are businesses with hundreds of employees and long-term track records.”

Russell sees that fostering of fellow entrepreneurs as one of the biggest legacies of his father, and those colleagues heading off on their own was something his father always supported.

“One of the things I know his father desired was that there would be hundreds of him in this country,” says Anthony Dixon, senior project manager, who recently celebrated 45 years with the company. “With the opportunities that avail themselves, there should be. I think Michael and his siblings have a real desire to see that take place.”

The family dedicated the 50,000-sq-ft building that had been the company headquarters for more than 40 years to the Russell Center.

“It’s all about trying to grow entrepreneurship,” Russell says. “To be a catalyst for people who want to be entrepreneurs.”

Egbert Perry, who worked at H.J. Russell for 13 years, including as president, said Michael is more of an institution builder than the dealmaker his father was.

“H.J. was a deal guy, he was always cutting the next deal,” Perry says. “Michael is more of the vein of, how do you take a foundation and build it out to be more of an institutional player?”

“You never know how much time you have, but I see him looking more toward what tomorrow looks like while he’s flying the plane today.”
—Egbert Perry, Chairman & CEO, Integral Group

Gellerstedt also knows what it is to have big shoes to fill, having followed his own father into the industry. It’s a gift, he says, but one that can present an overwhelming task of making your own mark while staying true to the culture—which he says Russell has done.

The company went through a rebranding in 2017, establishing itself as a builder of not only buildings, but communities.

“The motto is ‘We build communities,’” Dixon says. “He’s more of a concentric community builder, and a people builder within his own company.”

At 57 and looking at the legacy he’d like to leave, Russell says first, that he’s made an impact.

“I certainly want to be known not just as a business owner, but a business owner that made a positive difference,” he says. “I want my legacy to be where I’ve helped create something that is bigger than me.”

While standing on his father’s shoulders, it’s about taking it to the next level, Russell says. And the company is definitely not done yet. Or as Gellerstedt says, “Michael’s got a lot of runway left.”

Russell talks about setting the 70-year-old firm up to be a 100-year-old firm, whether he’s there or not, about making it even bigger and more impactful.

“You never know how much time you have, but I see him looking more toward what tomorrow looks like while he’s flying the plane today,” Perry says. “That’s the mindset of someone that’s looking strategically with a long view.”