Contractors spent 2021 chasing a wave of demand as markets rebounded from the depths of the COVID-19 pandemic, but instead of receding, builders see demand reaching a “new normal” in the Southeast.

The 125 companies listed on ENR Southeast’s Top Contractors ranking completed $49.5 billion of work in the region in 2021, an increase of more than $4 billion over the pre-pandemic figures of 2019.

Those firms—like Birmingham, Ala.-based Brasfield & Gorrie, which retained the top spot in this year’s Southeast Top Contractors ranking with $3.68 billion in revenue—are only seeing demand increase in what many say is the country’s most active region.

From all accounts, 2021 was a superlative year, with contractors describing construction activity as “tremendous” and “explosive,” even comparing the market to that of the boom year of 2007. But it’s a tide they don’t expect to see ebb anytime soon.

“It feels as if [construction activity in Southeast Florida] is up by 100% or more,” says Scott Moss, CEO of Fort Lauderdale, Fla.-based Moss Construction. Moss took the No. 11 spot in this year’s ranking with more than $1 billion in revenue. “It’s reminiscent of 2007, but I think the industry learned from that boom and bust, and now projects are better capitalized.” 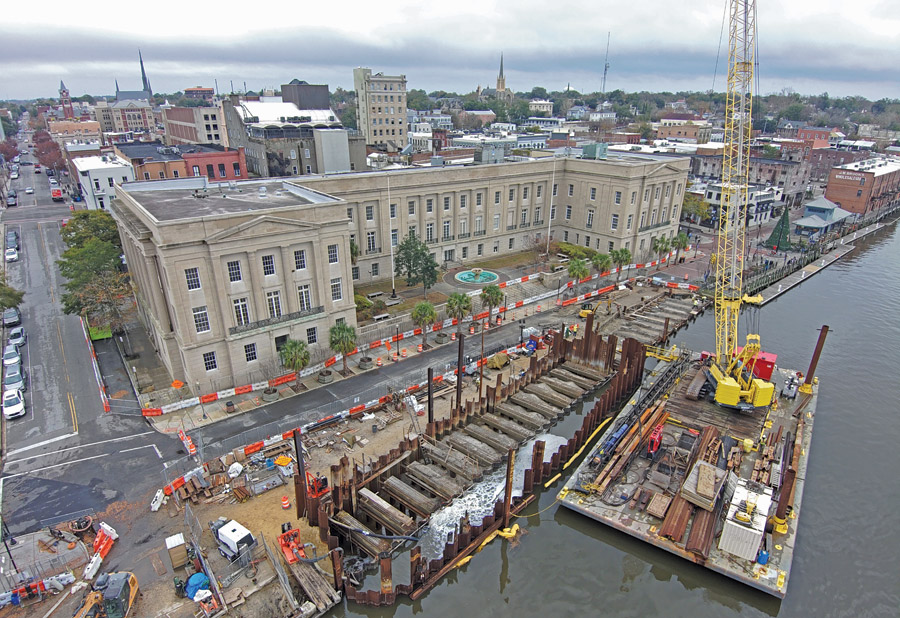 Rising interest rates may put the damper on some work, he says, but he thinks activity will remain strong.

“The Southeast is currently one of the most active geographic sectors in both residential and nonresidential construction,” says Bruce Adams, senior vice president at Robins & Morton, which ranked No. 10 with $1.07 billion in regional revenue. “While we saw more growth surges in 2021 from pent-up demand, 2022 reflects a busy but more stabilized construction demand.”

Construction materials aren’t flowing as freely, though, as firms continue to struggle with supply chain issues amid mounting labor challenges and rising costs. 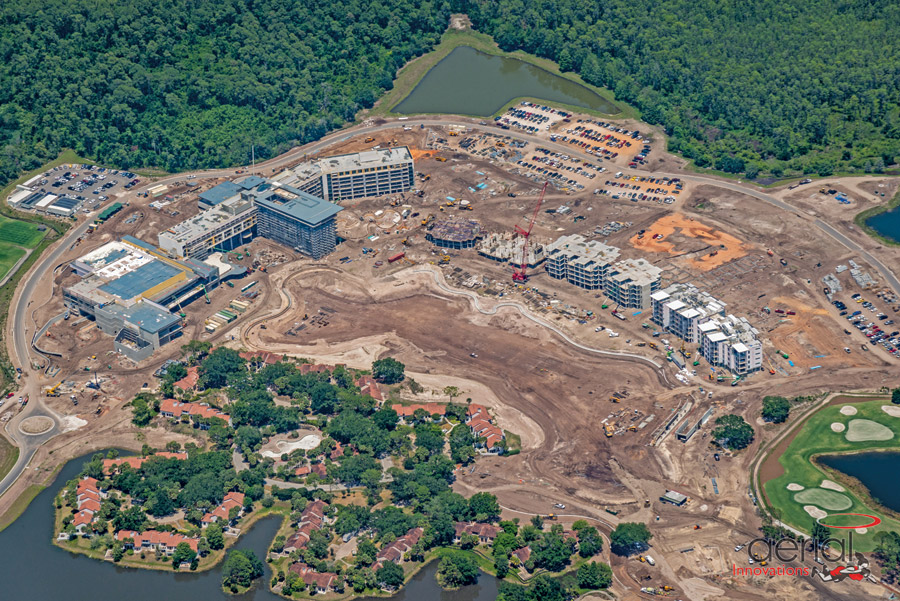 “The first challenge we encounter during preconstruction is ‘Can we get the material?’” says Rick Goldman, vice president and district manager for PCL Construction in Orlando. “The second is ‘Can the client afford it?’”

The early stages of the pandemic saw cause-and-effect outcomes related to supply-chain challenges, Adams says. Now there’s a backlog throughout the supply chain, pent-up demand and transportation and logistics bottlenecks.

“It feels as if activity is up by 100% or more. It’s reminiscent of 2007, but I think the industry learned from that boom and bust, and now projects are better capitalized.”
—Scott Moss, CEO, Moss Construction

As a result, firms are working closely with vendors, trade contractors and clients to facilitate longer lead times and higher prices.

“Each part and piece of a building these days seems to have its own story, and what, why, when and how is constantly changing,” says Jake Nellis, vice president and Tampa office manager for JE Dunn. At the same time, parts and pieces aren’t the only things that contractors are struggling to get their hands on.

“We are still battling a shortage of tradesmen in the field,” Nellis says, adding: “More people are retiring from the trades than entering.… We need the next generation to understand we want them involved, and construction offers so much potential” for every type of job in the construction industry, whether it’s in the trades, marketing, technology, safety or other fields.

Goldman says PCL has been able to keep projects fully staffed amid the labor shortage but sees that becoming more difficult as the firm tries to keep ahead by partnering with community organizations and local apprenticeship schools.

Costs are definitely up. For instance, Bruce Adams with Robins & Morton reports a 15% increase in the producer price index for new health care construction in a year, while Scott Moss says maintaining pricing schedules from subcontractors is an issue.

The pandemic required different jobsite protocols and affected employees and their families, Moss says, and then contributed to supply chain issues, inflation and price escalations.

“Moss has a very capable team, and I’m confident that with proper planning we will deal successfully with any challenges,” he says.

“In general, we don’t see any immediate slowdown in the markets where we have a presence throughout the country,” says Nellis. “I might be biased, but it seems like there is a lot of growth focused in the Southeast and South Central part of the country, in particular health care.”

Nellis may be correct. Firms that responded to ENR Southeast’s survey reported $6.1 billion of revenue in the health care sector, one of the region’s most active sectors, behind multifamily residential ($7.1 billion) and transportation ($6.3 billion) and ahead of distribution and warehouses ($5 billion).

“We’re very active in multifamily/for-rent apartments in each of our offices in the Southeast,” Nellis says, adding that private developers in the student-housing sector are helping keep that market strong while some universities rebuild their cash reserves.

Adams, with health care specialist Robins & Morton—which reported nearly a 13% increase in Southeast revenue—sees that market’s demand stemming from both a reaction to the lack of bed availability through the pandemic along with a need to update aging electrical, HVAC, technology and other systems, along with the desire to enhance patient areas.

Meanwhile, the $1.2-trillion Infrastructure Investment and Jobs Act has awarded more than $110 billion in funding to date, and some Southeast builders are optimistic about its impact. For instance, Rob Blalock, president with Brasfield & Gorrie, says public infrastructure work has been a “staple” sector for the firm.

“We believe the infrastructure bill will loosen the bottleneck of important projects local and state governments are seeking to deliver,” he says. “Hopefully the market’s progression toward alternative-delivery methods will help deliver these badly needed upgrades with maximum value.”

Firms report that Florida—especially the South Florida region of Broward, Miami-Dade and Palm Beach counties—is an especially active market, as are numerous other metropolitan centers throughout the Southeast region thanks to demand in multifamily housing and health care.

“As a state, Florida is extremely active for us right now—specifically in the greater Orlando, Miami, Tampa Bay and Jacksonville areas,” Adams says.

But he adds that major metro areas across the region, like Nashville, Charlotte, Atlanta and Raleigh-Durham, are seeing “explosive growth.” Robins & Morton opened its Raleigh-Durham office at the end of May.

Florida, with $18.1 billion in reported revenue in 2021, stands out as the most active state for the industry, beating out second-place North Carolina by nearly $8 billion.

In Florida, PCL Construction is seeing a boom in hotels, hospitality and entertainment as travel returns to pre-pandemic levels as well as an increase in aviation projects designed with an eye toward the future, Goldman says.

In Tennessee, he says the firm is seeing an increase in demand for manufacturing thanks to state grants aimed at job creation. 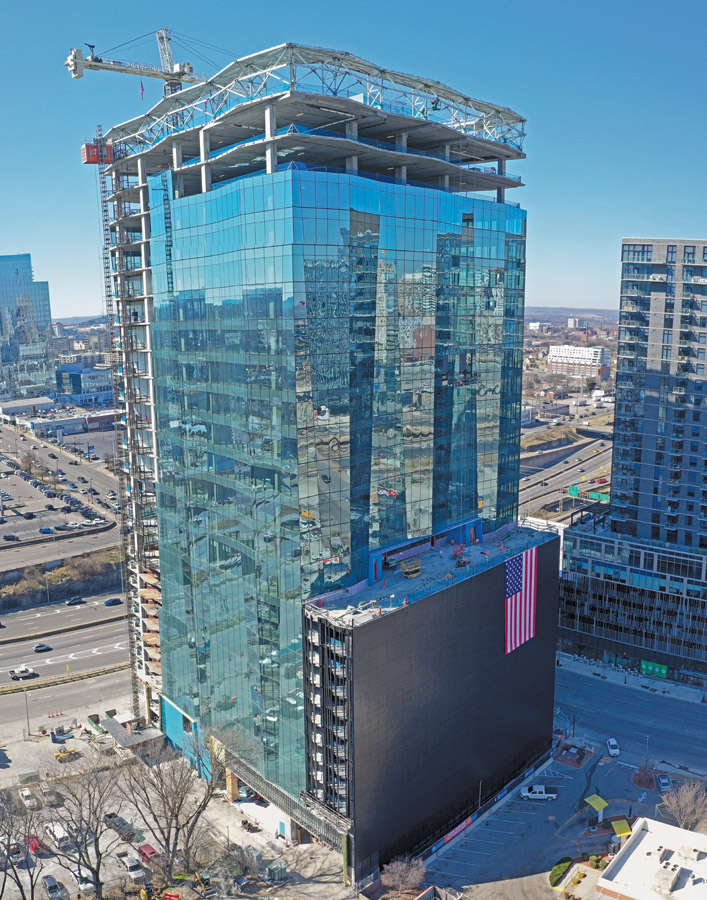 Florida repeated as the top Southeast state for total revenue, with $18.1 billion. That’s equal to the 2019 figure, but down from the year-ago tally of $18.3 billion.