This website requires certain cookies to work and uses other cookies to help you have the best experience. By visiting this website, certain cookies have already been set, which you may delete and block. By closing this message or continuing to use our site, you agree to the use of cookies. Visit our updated privacy and cookie policy to learn more.
Home » US Settles Border Wall Suit Against Contractor Fisher Sand & Gravel
NewsTexas-LouisianaTexas & Louisiana Construction NewsCompaniesGovernmentProject deliveryRisk
Companies

Constructed on private land along a Rio Grande River bank near Mission, Texas, the wall's risks came to light in a 2019 lawsuit filed by the US Justice Dept. It charged that the $42-million steel bollard fence fence was showing signs of erosion and instability and was in violation of a treaty with Mexico under the International Boundary and Water Commission because of flood risks to the river flow.

Texas officials and an adjacent non-profit wildlife center also sued over the project.

Under the federal agreement approved in US district court on May 31, Fisher and its units and affiliates must properly maintain the structure for 15 years. They also must repair defects such as bollards that lean more than 6° out of alignment, repair cracks in the foundation more than 3 in. wide and address any erosion under the footers or settlement of the foundation.

The agreement also contains a maintenance and operations plan intended to ensure the structural integrity of the wall and requires that the U.S. be allowed to inspect the wall quarterly, and after rain and flooding, Sally Spener, U.S. secretary of the commission, told ENR. Repairs must be made within 60 days.

The Fisher units also must maintain a $3-million bond to pay for fence repairs or if the firm fails to maintain it, says the settlement. Opponents had pushed previously to have the wall demolished.

Neither Justice Dept. nor Fisher spokespersons commented further to ENR on the agreement. According to one local media report, company CEO Tommy Fisher said he was "happy" the settlement was completed.

Fisher was hired by We Build the Wall, a group founded to raise money privately through a GoFundMe page to build the project separate from federal border wall projects awarded and overseen by the U.S. Army Corps of Engineers.

Two group executives pleaded guilty in April to wire fraud and other charges linked to their personal use of $1 million in donations and await sentencing. Stephen Bannon, who had been a White House chief advisor to former President Donald Trump, also was involved in project fundraising and charged as a defendant, but he received a presidential pardon in 2020. Trial of one other defendant now is underway. 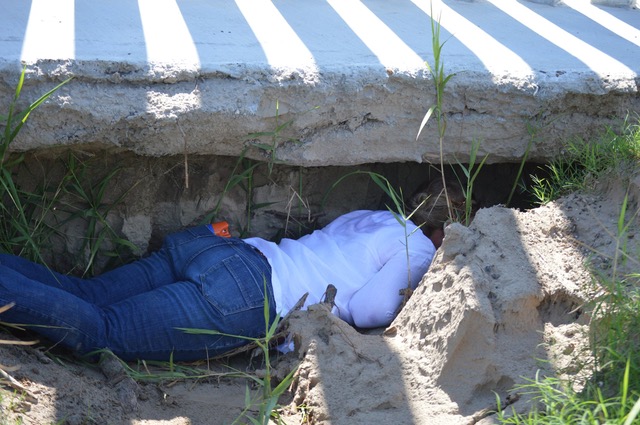 The boundary commission had asked to review barrier construction plans before work started to determine if they met requirements of the 1970 boundary treaty with Mexico. The treaty does not allow construction that would obstruct or deflect the normal flood flow of the Rio Grande to maintain the river as the international border. The wall was built without commission approval, Spener says.

The agency was concerned about erosion and collapse of the river bank, and that water flow the fence obstructed and deflected could cause the international boundary to shift, Spener says. Settlement terms "will make sure the fence is properly maintained,” she says.

The agreement, however, forbids release of a report prepared earlier for the government litigation by consulting firm Arcadis. The Justice Dept. would not say whether the analysis focused on hydrology or geotechnical issues.

But the settlement said the firm's work and report "contains proprietary information which pursuant to federal regulation is not subject to public disclosure." The pact also stipulates that Fisher Sand & Gravel, and its executives and attorneys, must “return or destroy all physical (and electronic) copies” of the report.

The National Butterfly Center, located near the private wall, filed the original lawsuit against it. Executive Director Marianna Wright said the Arcadis report supports hydrology and geotechnical studies the center commissioned from Millennium Engineering Group. Its report noted "signs showing potential risks for the wall due to erosion.”

In the federal complaint, government lawyers said Fisher’s actions have exposed the bollard structure and underlying support to “degradations which, as they continue to worsen, could result in the collapse of the structure.”  The Anzalduas International Dam and structures downstream could be damaged, the Justice Dept. said.

Wright said that the next catastrophic river flooding, in the event of the wall's failure, “will result in the loss of property and lives.”

$1.3B Border Wall Contract Controversy Is Just the Latest for Fisher Sand & Gravel