This website requires certain cookies to work and uses other cookies to help you have the best experience. By visiting this website, certain cookies have already been set, which you may delete and block. By closing this message or continuing to use our site, you agree to the use of cookies. Visit our updated privacy and cookie policy to learn more.
Home » Orlando Hospitality Construction Set to 'Break Free'
SoutheastSoutheast Construction News
SE March 2022 City Scoop: Orlando

As tourism returns to pre-pandemic levels, the Orlando construction industry is preparing for increased demand.

Central Florida is poised to have “more work than what we’ve experienced in the last five years,” says Rick Goldman, vice president and district manager for PCL Construction Services. Notably, Goldman makes that case even as the greater Orlando area’s two long-term infrastructure megaprojects—I-4 Ultimate and Orlando International Airport’s South Terminal—start to wind down. Along with strength in multifamily residential and general commercial sectors, the return of tourism to pre-pandemic levels over the past several months means that “all the resort and hospitality products that have been in the planning stages for the last two to three years are now ready to break free,” Goldman says.

Headlining the region’s signature tourism sector is Universal’s Epic Universe, a 750-acre theme park now scheduled to open in 2025. Nearly doubling Universal’s footprint in the Orlando area, the project is expected to spur a wide range of ancillary development, including a new hotel already permitted for an adjacent parcel. 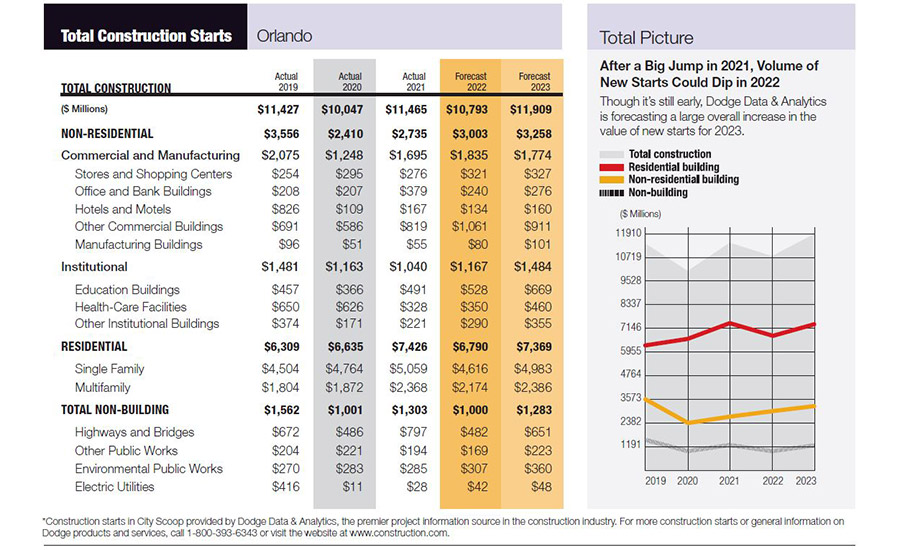 Other hospitality sector projects include the $175-million, 433-room Conrad Orlando Hilton luxury hotel, which PCL is building for Dart Interests at the Evermore Orlando Resort. In February, BANCA USA and Banesco USA secured financing for a 143-room luxury Hyatt Place hotel at Orlando Melbourne International Airport. The development is slated to open early next year.

Goldman notes that the area also stands to benefit from Florida’s efforts to lure corporate operations to the state. Last summer, Disney announced plans to relocate 2,000 corporate and enterprise jobs from Southern California to a new campus at Lake Nona. “That will have a big effect on housing and other sectors,” he says. “Hopefully, other companies will take notice.”

Infrastructure also remains part of the area’s construction mix, with the Florida Dept. of Transportation launching an open-ended series of capacity enhancement projects on both ends of the 21-mile-long I-4 Ultimate Corridor. Called Beyond the Ultimate, the program began last year with three interchange reconstructions to diverging diamond configurations. Other projects will include reconstruction of I-4’s general purpose lanes and extension of managed lanes.

A rebound in air travel has also enabled Orlando International Airport to restore previously deferred portions of the South Terminal C project, including completion of a pedestrian bridge connection between the terminal and its ground transportation facility. 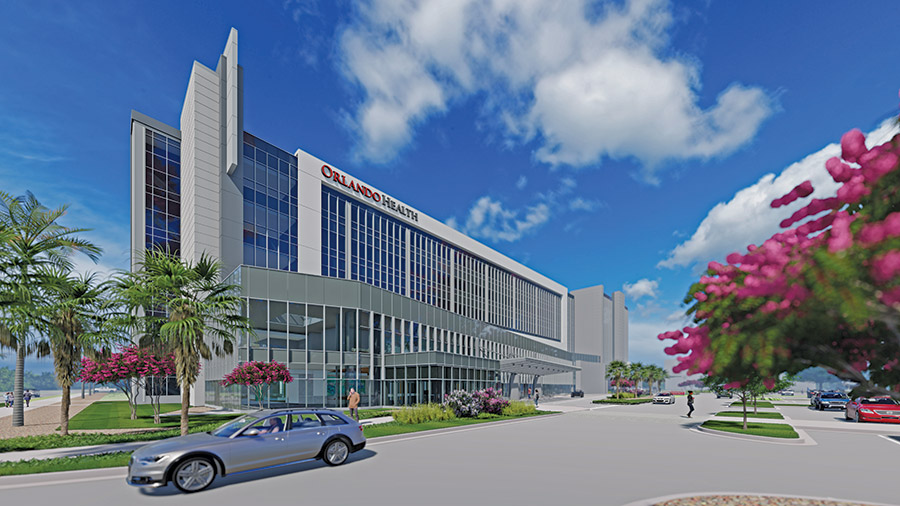 To date, no plans have been announced to revive another pandemic casualty—a $605-million  expansion to the Orange County Convention Center that was halted in the planning stage in August 2020 due to both depressed tourism tax revenue and concerns about the project’s significant price tag.

Clouding this otherwise sunny construction forecast, Goldman says, are familiar challenges such as labor availability for both salaried and hourly workers and the uncertainties of inflation and escalating material costs.

Additionally, he worries that as much as 40% of the projects PCL currently has in the preconstruction phase could be delayed.

“From a backlog standpoint, everyone is in a pretty good spot,” he says. “It’s the 12- to 36-month outlook—what are things going to be like?”