This website requires certain cookies to work and uses other cookies to help you have the best experience. By visiting this website, certain cookies have already been set, which you may delete and block. By closing this message or continuing to use our site, you agree to the use of cookies. Visit our updated privacy and cookie policy to learn more.
Home » Bridge Builders Take Tricky Trip Across Tampa Bay
SoutheastSoutheast Construction Projects
Digging Deeper | Highway/Bridge

The roughly 180,000 daily motorists who traverse the Howard Frankland Bridge along Interstate 275 and across Tampa Bay can be forgiven if they view the ongoing construction work as nothing out of the ordinary or even eye-catching.

Currently, the only visible sign of completed work for the mostly low-level, approximately three-mile-long bridge structure is the substructure still taking shape. Eyed from one project endpoint, the view of completed substructure work extends impressively into the distance.

Since construction began in late 2020, the Florida Dept. of Transportation reports that, as of February, more than 1,200 of the 3,006 pilings necessary for the new eight-lane bridge’s foundations have been driven. Crews have constructed 120 of the project’s 549 bridge footings and completed 110 of the planned 549 bridge columns and 38 of the necessary 226 pier caps. With its substructure configuration matching that of the two twin bridges that comprise the current Howard Frankland—one of which will remain in place—the new span will feature 113 piers in support of its 112 spans. 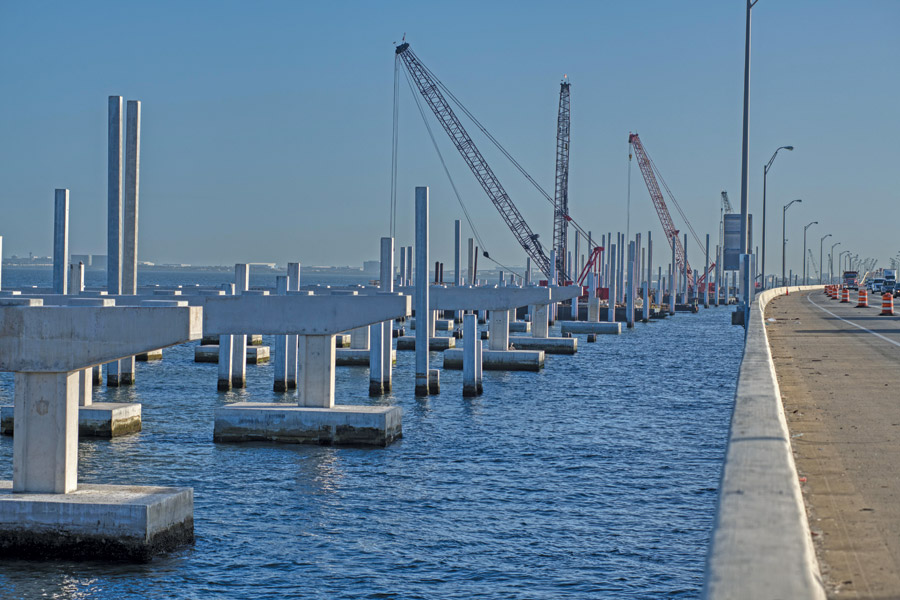 Despite the impressive achievement marked by those numbers, Greg Fullington, project executive for the Archer Western-Traylor Bros. joint venture leading construction of the $865-million design-build project, describes the work as “pretty standard.”

And while this project’s status as a mostly low-level structure doesn’t qualify it as a “signature” bridge, it’s certainly a big project for the Tampa Bay area, in more ways than one.

The new bridge will serve as an update and an expansion to the current Howard Frankland, which is comprised of two four-lane structures: a late-1950s-era bridge that carries traffic heading northbound from St. Petersburg and a structure completed in 1990 that handles southbound I-275 traffic from Tampa.

The “expansion” comes from the new bridge’s capacity being twice that of the existing four-lane spans. In all, the new bridge structure will comprise eight total lanes, including four general-use lanes for southbound traffic along with four tolled express lanes—two each for northbound and southbound. 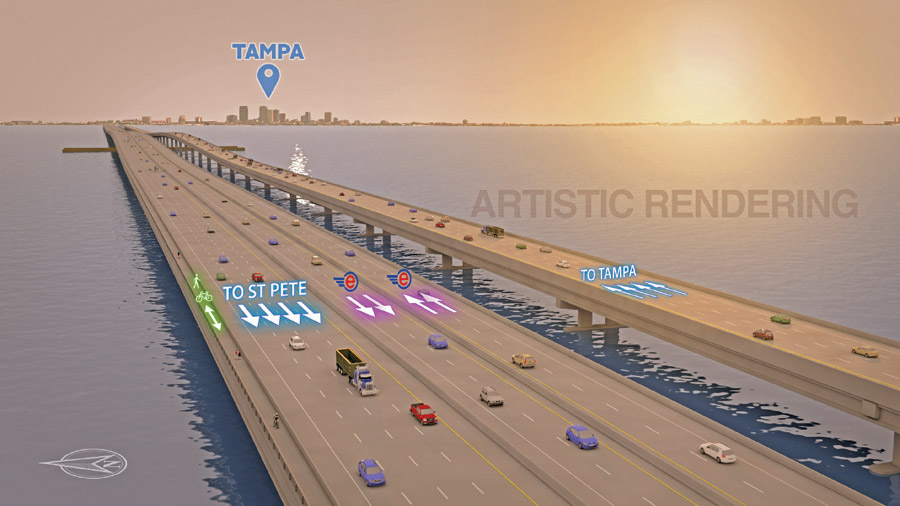 To date, the Archer Western-Traylor Bros. joint venture is on schedule despite slower-than-expected progress with pile-driving work, says Fullington. He credits night drilling initiated during early schedule slippage with keeping the project on track despite the delayed pile work.

Another item that’s helped keep the contractor on pace  is the state’s approval of a special permit issued by the Florida Dept. of Environmental Protection for use of a “mixing zone” for purposes of measuring turbidity caused by drilling and other operations. Extending up to 500 ft from the pier locations, contractors are able to measure turbidity from the edge of that zone instead of immediately adjacent to the work. To date, contractors have stayed within limits, helping to keep crews productive, says Fullington.

Since construction commenced in October 2020, crews have driven 40% of the necessary 3,006 piles. Like Fullington, Marianne Brinson, senior project engineer with Atkins, the project’s construction engineering and inspection firm, seems to downplay the project challenges as she describes construction of the bridge substructure as “straightforward.”

That may be true, but at the same time, the Tampa Bay geology has been throwing the team some curves. “This scope certainly is the most challenging on the project,” Fullington says. “This is very difficult foundation geology.”

Well-known for its irregularity, Tampa Bay’s geology can vary in seemingly random and isolated spots. For example, on numerous occasions—and as designed—the contractor has had to use the common method of splicing piles to reach bearing capacity. Sometimes, though, Fullington says, along the same pier line that required a spliced pile to reach capacity, crews have struggled to drill through rock.

That scenario played out in extreme fashion at pier 93, Fullington says, where crews had to drill through rock to get to a minimum tip of 75-78 ft for one pile. Along the same pier, about 50 ft away, however, crews drove spliced piles to approximately 250 ft without getting “near capacity on it,” he says. 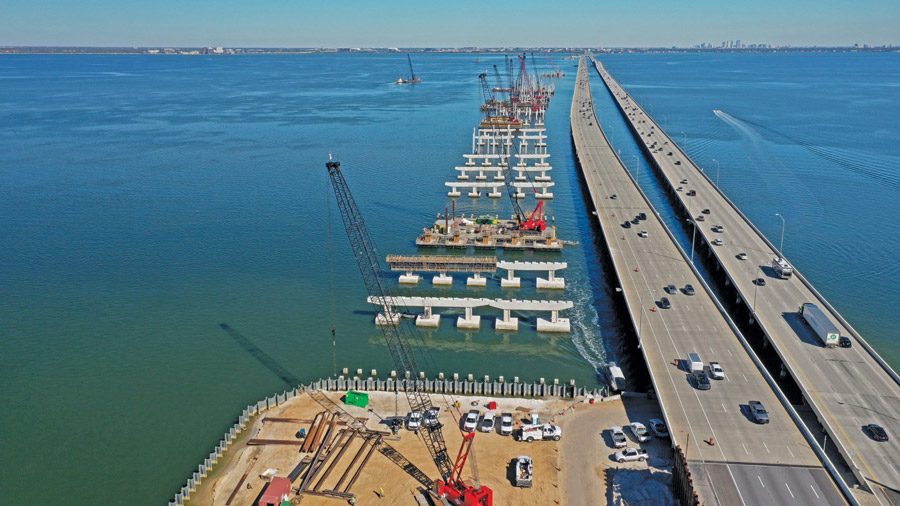 This view from the west end of the project shows how the contractor is working at both ends of the bridge project.
Photo courtesy Archer Western

Daniel Raymat, director of structures for BCC Engineering—and engineer of record for the bridge structures—concurs with Fullington that the project’s variable rock layer and unique soil conditions have “probably been the biggest challenge.”

From the construction of the two existing structures, engineers had plenty of historical data to rely upon as they precisely designed each of the 113 piers for the specific conditions they anticipated for each location.

“Each pier had to be uniquely designed for a specific soil condition,” Raymat explains, adding that, overall, pile lengths vary from 60 to 220 ft. Even in close proximity, the team expected “a lot of variability,” he says.

Despite the extensive historical information available to them, “We didn’t know at any given pier just how much variability there was going to be,” adds Ariel Millan, BCC executive vice president.

The team expected to see anywhere from 60 to 100 ft of variability between minimum and maximum pile depths on a single pier, Millan adds. Still, without being certain of what to expect at every pile location, “you have to assume you’re going to have to splice a certain number of piles.”

While the contractor expected the final number of piles to exceed the official estimate of 3,006, it remains to be seen if the joint venture gave itself sufficient excess piles. The number that would ultimately be required “was a big risk for us,” Fullington says. While he adds that the joint venture “did carry additional length in our estimate ... we’ve seen more piles run longer” instead of shorter than expected. 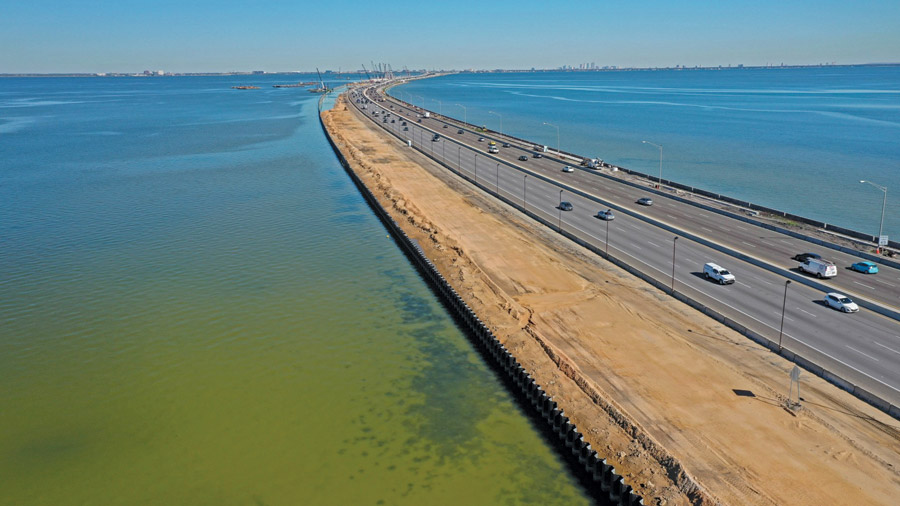 So far, so good

Like the bridge builders, FDOT project engineer Greg Deese agrees that the current phase of construction is the “most critical.”

“Once we get out of the ground, the job becomes a little simpler,” he says. “Once the pile-driving is done, it should be a really good job to finish up.”

To that end, FDOT states that beam placement is slated to start by late spring, followed by the commencement of deck construction by early summer.
So far, the contractor’s ability to stay on schedule, despite the underground hurdles, is earning kudos from FDOT.

Deese said what has stood out to him when visiting the site is the safety consciousness of the crews, noting that “you can tell they’re taking pride in their work.” 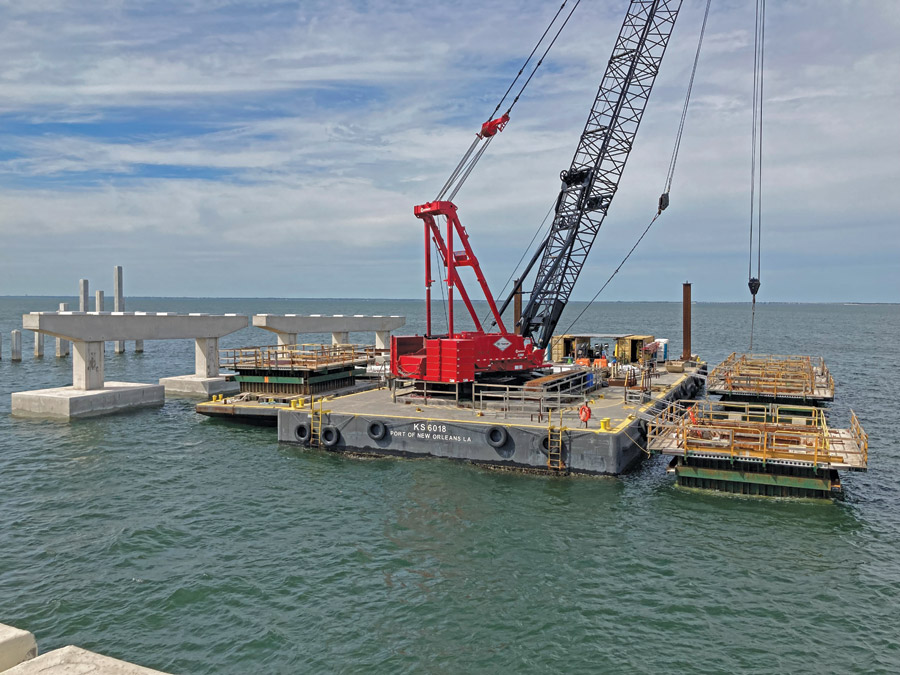 Despite the hazards of marine work, the contractor says the project has been able to achieve a good safety record to date.
Photo by Scott Judy for ENR

Brinson, with Atkins, has a similar view, noting that the joint venture’s point of surveying field workers as part of its monthly partnering effort has shown workers are feeling positive so far.

To Brinson, those surveys confirm that “it’s obvious that everybody is clearly showing a great respect level for each other,” including the field workers.

To that end, Fullington says the joint venture has utilized such tools as recognition of Crews of the Month and other ways to keep employees engaged and otherwise proud to be working on this landmark project. The focus on workers is key to productivity, safety and keeping staff satisfied and on the payroll, he says.

Overall, despite what he calls an “extended learning curve” with the foundations, Fullington says “we’re where we expected to be, on schedule.”