This website requires certain cookies to work and uses other cookies to help you have the best experience. By visiting this website, certain cookies have already been set, which you may delete and block. By closing this message or continuing to use our site, you agree to the use of cookies. Visit our updated privacy and cookie policy to learn more.
Home » Transit Development Hub Uses Prefab Metal Frame
CaliforniaCalifornia Construction Projects
Digging Deeper | Mixed-Use Development

Gateway at Millbrae Station sets the bar for design integration

Builders of one of California’s largest transit-oriented developments (TODs) are crediting the use of an innovative pre-engineered, light-gauge metal-framing system for keeping the $400-million-plus mixed-use project on time and on budget.

“The Gateway at Millbrae Station project is a very tight site with limited fire access between each of the buildings and the existing structures,” says James Woodbury, vice president at Blach Construction. “During the entitlement phase, we quickly realized that finding a non-combustible solution for the building structures was our only viable option for maximizing the density required to make the project feasible.”

Woodbury says the team overseeing the project, developed by Republic Urban Properties and constructed in a joint venture between Blach Construction and Cahill Contractors, investigated several light-gauge metal-framing options and considered full concrete options but found that Prescient, a digital design-build system, would provide the best overall project value given the pandemic and the tight construction schedule. 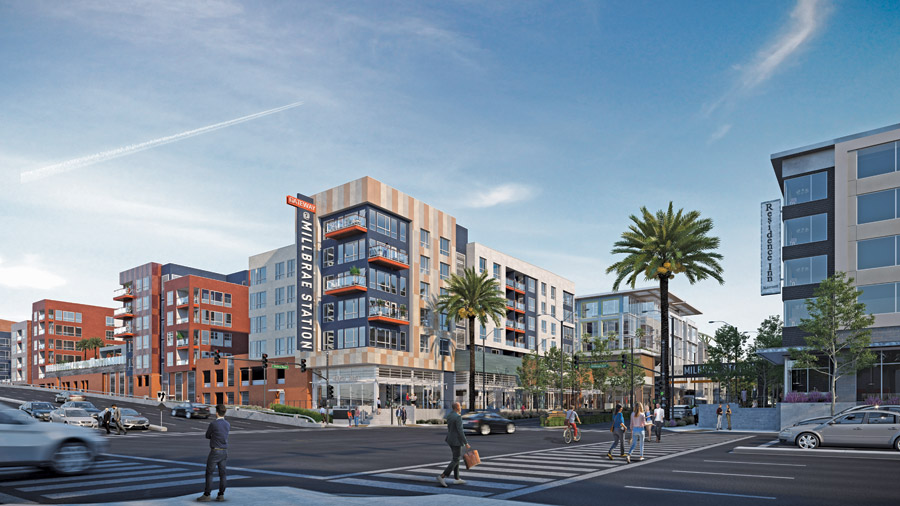 TODS to the Future

Collectively, the Gateway at Millbrae Station (GMS) comprises a 320-unit market-rate housing building with ground-floor retail, a 150,000-sq-ft Class A office building with ground-floor retail and accompanying parking garage, a 164-room Marriott Residence Inn, 80 units of veteran-preferred affordable housing and all new utilities, landscaping and sitework amenities that service each of the four building structures.

“The Gateway at Millbrae Station represents a significant trend in transit-oriented developments,” says Reyad Katwan, COO, Republic Urban Properties. “As one of the largest [TODs] in our state, its location at BART’s most highly trafficked station and close proximity to SFO makes it ideally suited for its users.”

Located in the city of Millbrae, Calif., within walking distance to BART, Caltrain, and SamTrans, as well as future high-speed rail, the project also will feature 44,000 sq ft of ground-floor retail and restaurant space, along with new public parks, plazas and pedestrian and bike paths.

Katwan says in addition to offering office, retail and other urban amenities, GMS features a much-needed hotel. “Most notably, however, are the two multifamily residential components that directly address the housing crisis currently plaguing the Bay Area, with the affordable, veterans-preferred housing portion aimed at assisting those in need,” says Katwan, who notes Republic Urban Properties is looking at similar developments with the Valley Transportation Agency in San Jose to build out its Tamien and Blossom Hill stations.

Arash Baradaran, vice president of Cahill Contractors, says TODs represent an opportunity to bring people together and use the transportation resources the Bay Area already has in place.

“Gateway at Millbrae Station creates a mini-neighborhood that offers amenities to residents and visitors and also provides a convenient transportation link to the rest of the region,” Baradaran says. “While coordinating complex construction activities within an active transit center is challenging, GMS and other TODs provide such a benefit to the greater community that we expect to see them continue well into the future.”

Baradaran says Cahill does not have additional TODs currently under contract but will pursue other opportunities in the space.

“This project is significant and helps put the city of Millbrae on the map for many reasons. It provides a mix of uses ideally suited to benefit from the proximity of traffic; provides the catalyst for attracting additional investment and development in the area, as evidenced by two new major life science campuses adjacent to this transit-oriented development; and implements innovative construction systems that are environmentally friendly and sustainable,” says Tom Williams, city manager for Millbrae. “The public-private partnership throughout this project in working with Blach/Cahill and Republic Urban Properties is a model of how to get things done in today’s complex development environment.”

GMS is approximately 60% complete. Work broke ground in January 2020 and is slated for completion this summer. 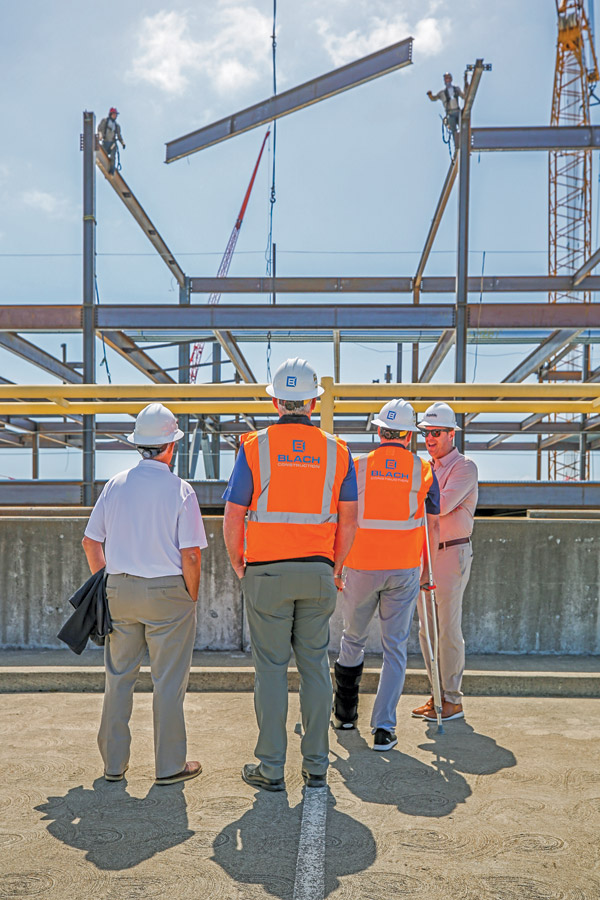 The project team celebrates the topping-out of Gateway at Millbrae Station.
Photo courtesy of Blach Construction

“The Prescient system was specifically designed for multifamily construction where we can drive repeatability and standardization with an industrial mindset that allows us to scale and drive productivity similar to what has been achieved in other industries that have adopted the same approach like the car industry,” says Magued Eldaief, Prescient CEO. “Any multifamily/hospitality building includes a number of similar units that can be replicated leveraging our platform to gain efficiencies in cost and schedule. The key is driving a standardized process leveraging digital technology and standard hardware kit to deliver it.”

For the approximately 943,000-sq-ft GMS, the project team used Prescient’s light-gauge steel-framed wall panels and trusses. The first-of-its-kind system is called the Unified Truss Configuration System, and officials say GMS is the first project to utilize this technology in the Bay Area on such a large scale.

The system allows construction material to be pre-cut and assembled on site as the project team receives software applications that act as a digital manual with design, engineering and manufacturing calculated from the outset within an installation plan. This means crews know where each piece of the building’s footprint needs to be installed—like a puzzle delivered via one continuous digital thread.

Woodbury says Prescient provides a fully modeled structural design that represents exactly what will be manufactured, delivered and installed on site. “Once all of the Prescient material is delivered to the site, installation is very fast, and with a very high level of accuracy for the trades that follow behind them,” he says. “In addition to the construction-related advantages of Prescient, the non-combustible nature of their system dramatically reduces construction insurance costs along with weather-related impacts.”

“But from a hard construction cost perspective, it is safe to say that using Prescient [versus wood framing] is comparable in total hard cost,” says Woodbury, adding that the Prescient solution has allowed them to prefabricate 80% of the building structures off site in a controlled environment. “However, insurance savings to the owner, for both the course of construction and long term, made the project pencil out, allowing it to move forward. Without implementing Prescient, we would not have had a financially viable project ready to proceed in January 2020.”

Katwan says as the owner, Republic Urban Properties, wasn’t looking for small ways to cut costs when deciding upon the Prescient method. “Instead, we were looking for a paradigm shift in how buildings are built. So we aligned ourselves with forward-thinking, like-minded partners, like Blach Construction, and challenged them to seek out revolutionary solutions that afford greater efficiencies, offer increased value and essentially reduce our costs,” he says. 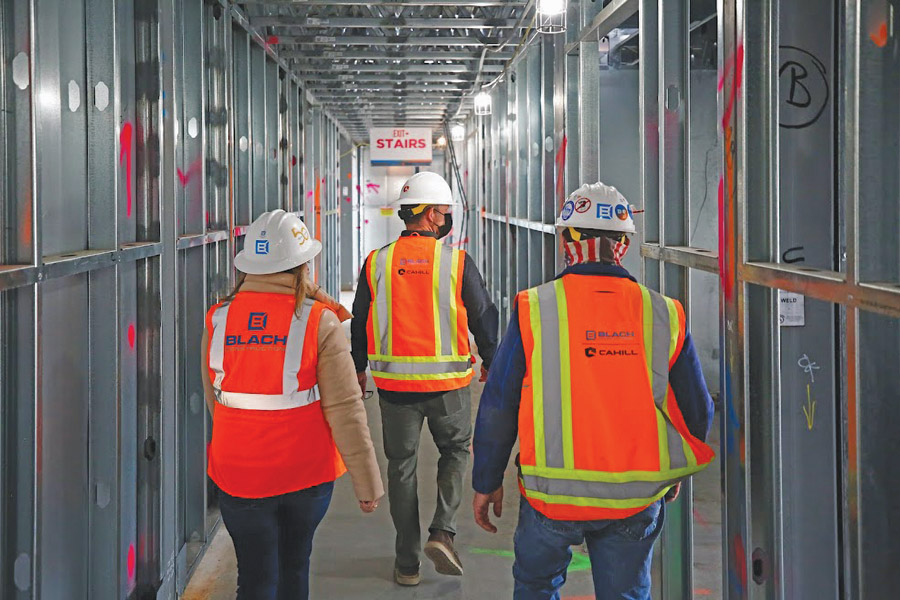 Woodbury says working during the pandemic has been one of the job’s most fascinating construction challenges.

“The combination of elevated worker safety protocols, material procurement shortages and delays, increases in material costs, labor shortages and shipping and logistics challenges all have had a major impact on our industry worldwide,” Woodbury says. “Despite these challenges, a reduction in commuter ridership allowed our team greater flexibility to advance efficiently while creating minimal disruption to travelers of this active transportation hub.”

Woodbury says given pandemic-related impacts, it is impossible to analyze the time savings associated with using Prescient on this project. He says the “global supply chain was disrupted significantly, so comparison of any structural system during this time in history” is not possible.