This website requires certain cookies to work and uses other cookies to help you have the best experience. By visiting this website, certain cookies have already been set, which you may delete and block. By closing this message or continuing to use our site, you agree to the use of cookies. Visit our updated privacy and cookie policy to learn more.
Home » New Salt Lake City Convention Hotel Designed to Allow for Maximum Light
Mountain StatesMountain States Construction Projects
Digging Deeper | Hospitality

Rising 327 ft beside the Salt Palace convention center, the design goal of the Hyatt Regency Salt Lake City was simple: Let the sunshine in.

Each of the 700 rooms in the hotel’s 25-story tower welcomes natural light with floor-to-floor glass, while its six-story podium features a 23,000-sq-ft ballroom with the entire south wall open to light and views. The complex will offer 60,000 sq ft of meeting space and mark the debut of the first large four-star hotel in the area since the opening of the Winter Olympic Games in 2002.

The podium levels include a junior ballroom, restaurants and a rooftop pool as well as parking stalls in the basement. Construction on the 686,000-sq-ft project is 75% complete, with the hotel set to open in October. 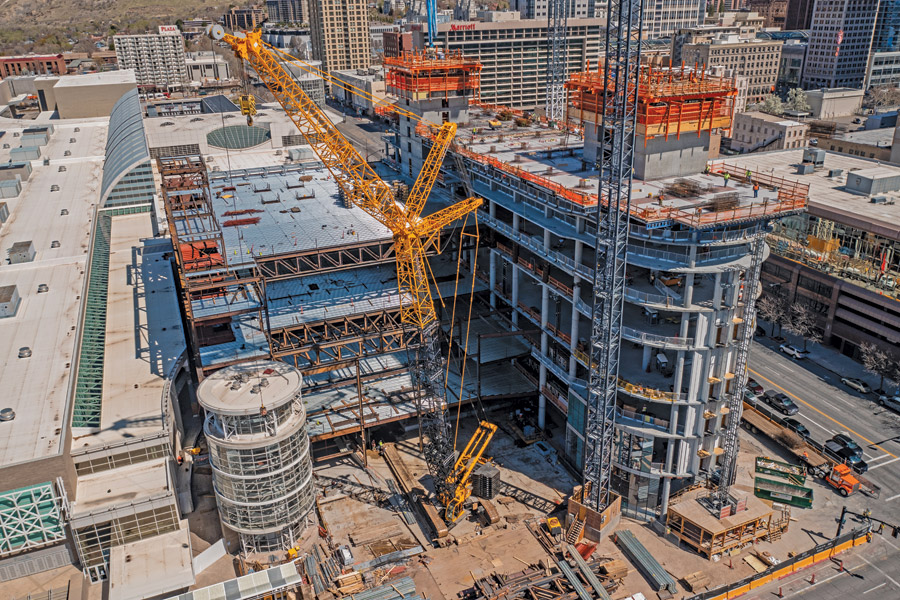 The project’s owner is Salt Lake City Convention Hotel LLC, a joint venture with Portman Holdings and Hensel Phelps Development. The builders approached city officials with their proposal in 2018 and announced the selection of Hyatt as the operator in January 2020.

“The city has been wanting a convention center hotel since probably 2009-2010,” says Ali Streetman, project manager for the ownership group. 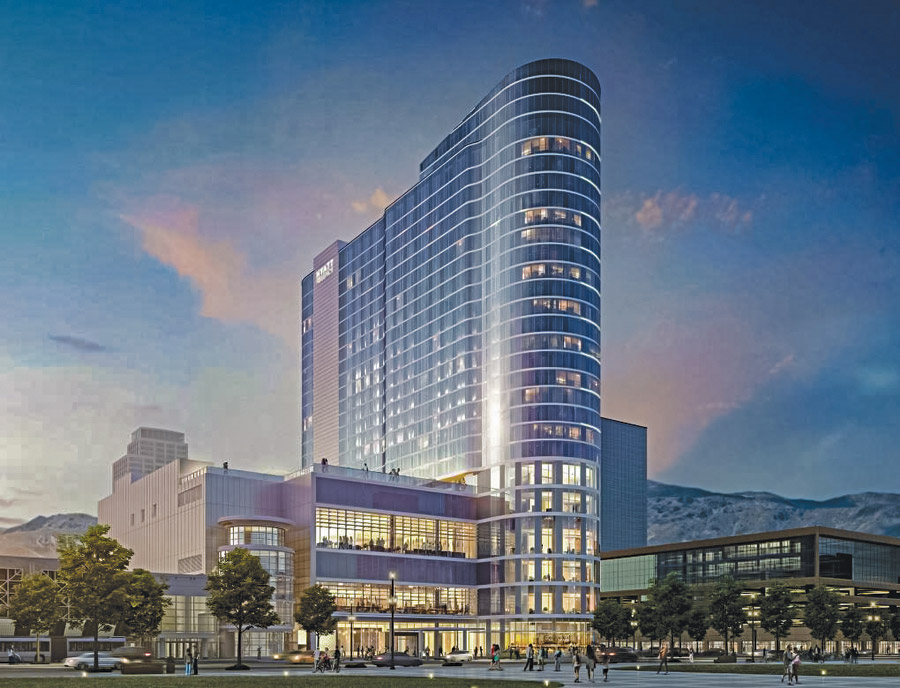 The timing was fortuitous for the Hyatt Regency complex, which broke ground in January 2020, allowing the project team to order equipment and materials ahead of time.

“We were able to order the structural steel in April, which allowed us to get ahead of some of the structural steel issues that came along with the pandemic,” says Adam Noelck, project manager with general contractor Hensel Phelps. “We ordered our generators in January 2020, and they were warehoused until they were needed that fall.”

The structure topped out in November, and the project team is warehousing interior hotel furnishings in preparation to start installation in the next couple of months, says Streetman. “We will be physically storing more than we normally would [due to] the pandemic, but not everything. We can’t just keep it sitting for extended periods of time just because it will still roll in—you can’t ship 700 rooms of furniture in one shipment.”

The complex’s light-filled design fits in well with Hyatt Corp.’s hotel portfolio, Streetman says. Portman has a long history with the hotel company, building its first Hyatt Regency in the 1960s in downtown Atlanta. The project building site covers a little over two acres—with a podium footprint of 54,000 sq ft—and sits against the Calvin L. Rampton Salt Palace Convention Center. 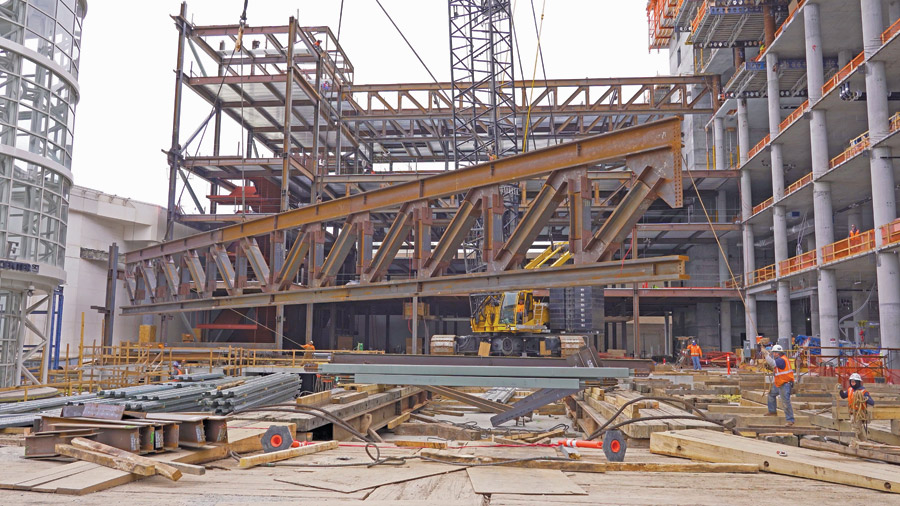 The Hyatt Regency is a separate building but is linked to the convention center by a pedestrian entrance on the west side and a parking connection on the basement level. The team had to demolish part of the Salt Palace to make room for the project, and the site has open access on only two sides.

These days, crews are working on the metal panels on the tower’s exterior facade as well as finishing the roof and framing walls. “It’s a very busy tower right now,” Noelck says.

The tower’s mat slab foundation, placed in August 2020, consists of about 7,500 cu yd of concrete and 1.1 million lb of reinforcing steel. More than 400 people were involved in the overnight placement, supported by six concrete pumps and 90 trucks dispatched through five concrete batch plants. To complete the job, the team closed down SW Temple Street for a day. 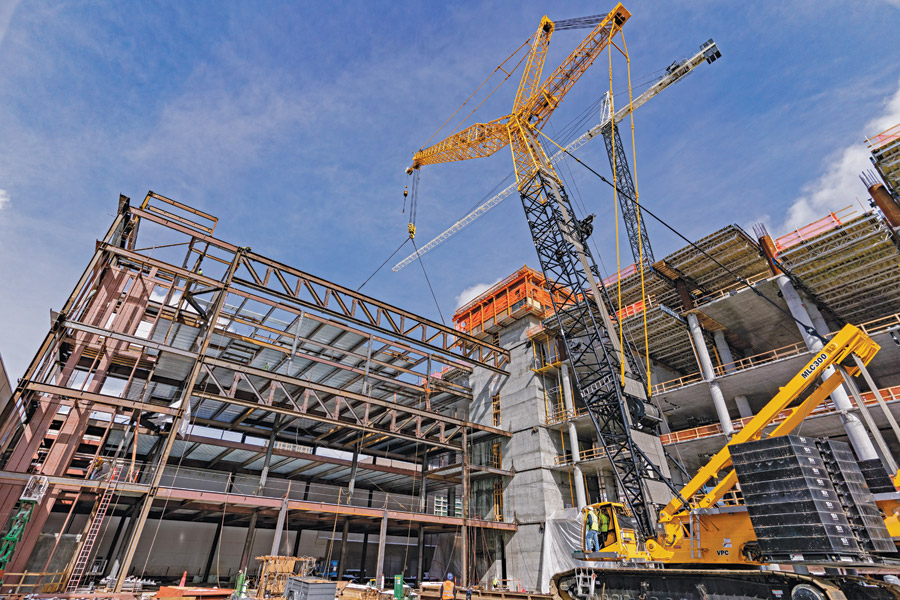 “That was our major street closing,” Noelck says. “We had a few periodic ones when we erected and dismantled the tower cranes. But we’ve been trying to keep pretty close to our footprint.”

On the podium, workers are currently installing drywall on Levels 1 and 2. Constructing the podium required 2,200 tons of structural steel. To avoid using columns in the complex’s ballrooms, the team used structural steel on the podium, including 13 large trusses on Levels 2 and 4. Each truss measured about 120 ft, and the heaviest weighed about 189,000 lb.

To erect the steel, the team tracked a 300-ton crawler crane with an adjustable counterweight onto the first level’s concrete deck. The total weight of the crane and counterweight was about 1.1 million lb, so the deck was shored through the basement and a temporary grillage system was installed across the deck. The trusses arrived at the site in two segments, which were then welded together and hoisted into place. The project also used two tower cranes rising 410 ft and 360 ft tall. 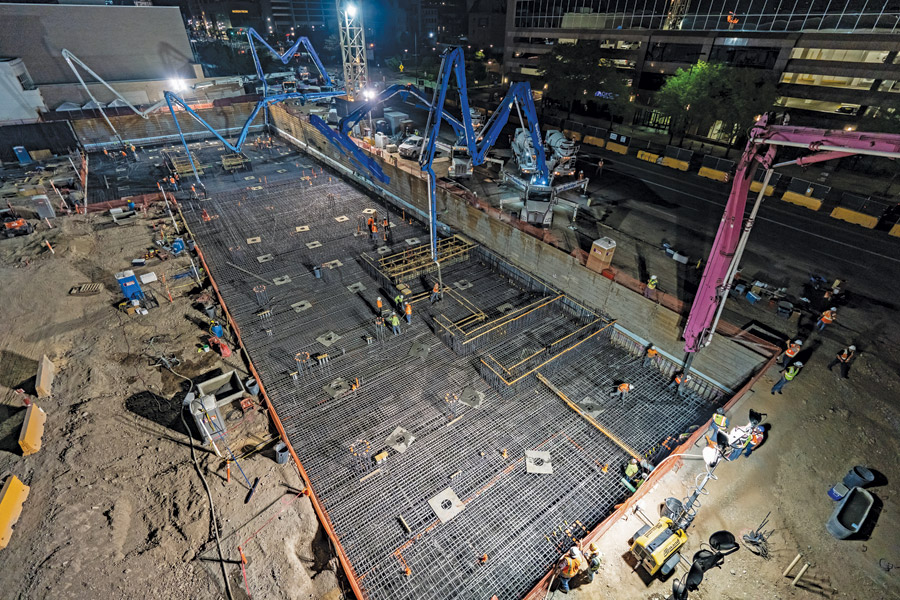 The project team was committed to using local labor and companies, and 97% of the trade partners are Utah based. “We’ve been able to build this team from a grassroots Salt Lake City effort—we have people that have been hearing about this project for 10 years,” Noelck says.

The Hyatt Regency complex arrives during a building boom in Salt Lake City, which makes meeting the labor demand a challenge since the project will require about 1.5 million work hours in total, Noelck says.

The estimated $377-million hospitality project arrives in the midst of a building boom in Salt Lake City.
Image courtesy of Hensel Phelps

“Given just how busy the market is and the need for craftspeople to place concrete and hang ducts and set equipment, it’s a growing challenge that with each job becomes more difficult to navigate,” he adds.

Part of the solution is finding more efficient ways to build buildings with a tight labor market, Noelck says. “We’re searching out ways to become more efficient, eliminate rework and really do it right,” he says. For example, he says the team heavily utilized laser scanning to ensure that MEP sleeves and penetrations were in the right location prior to concrete placement .

Taking that extra time prior to placing concrete allowed the team to be more efficient with the follow-on build, Noelck says. “It’s methods and strategies like these that allow you to do more with less.”