The project is being managed by the Denver Housing Authority and the city and county of Denver. The expansion will be funded by the DHA Delivers for Denver Bond Program. Once constructed, the new Warren Village facilities will provide two-generation (2Gen) supportive services for single-parent families experiencing chronic housing instability or homelessness.

The Cherry Creek Project Water Authority (CCPWA) recently broke ground on the $11.8-million Walker Reservoir project in Franktown, Colo., to bolster local water resources. The project, led by Stantec’s Fort Collins office, will transform an abandoned gravel pit into an expanded and functional reservoir to deliver a sustainable water future for area residents. Work will include excavation and regrading of the current site and design and installation of a slurry cut-off wall around the perimeter to deliver supplemental supplies of raw water. When it’s complete, Walker Reservoir will be able to store up to 1,000 acre-ft of water. 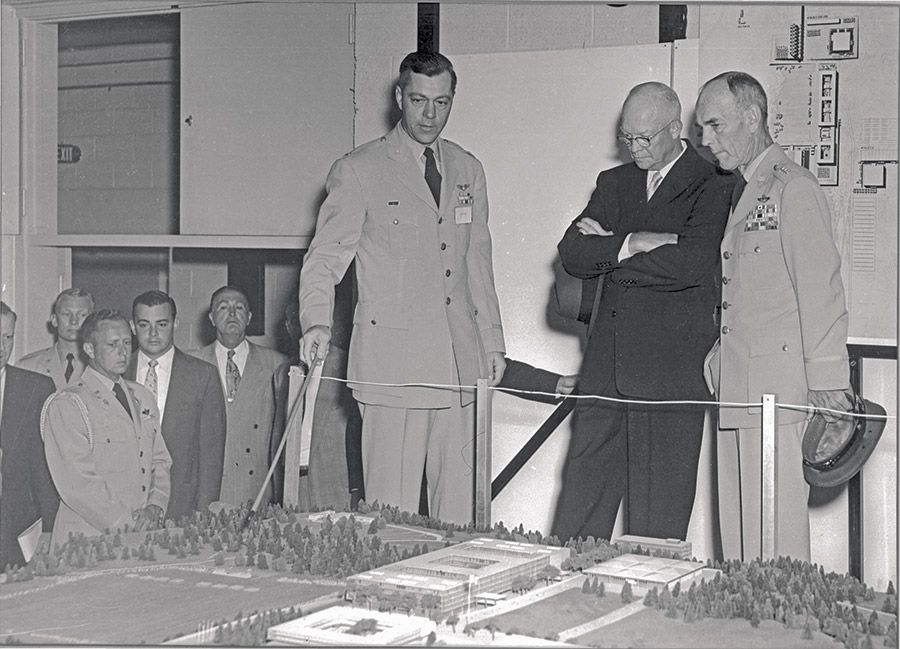 In 1961, Arthur Witters (center, with pointer) became chief of the Air Force’s architectural division. A year later, he was named consultant for the design of the new Cadet Chapel at USAFA.
Image courtesy of Richard Witters

“Col. Arthur Witters not only answered his nation’s call to serve in a time of war, but it seems he was destined to play a major role in establishing the United States Air Force Academy.”
— Lt. Col. Jeremy Oldham, Base Engineer, USAFA

The U.S. Air Force Academy has renamed a support building to honor one of the institution’s engineering pioneers. At a ceremony on Oct. 14, the Col. Arthur G. Witters Civil Engineering Building was named in memory of Witters, the first civil engineer at USAFA, and a primary designer of the campus. He passed away in 2011.

Witters, a fighter pilot in WWII, did his master’s thesis on the academy in 1948, was on the academy board during planning of the campus and drafted the congressional bill, Public Law 325, which officially established the new Air Force Academy. The legislation eventually was signed by President Dwight Eisenhower on April 1, 1954. For several years, Witters was the only person authorized to testify before Congress on Air Force Academy matters, which he did a total of 22 times.

“Over the past 12 years, the culture has shifted at ITD to a workplace where employees are encouraged to innovate, collaborate and make decisions as close as possible to where the work is being done,” said Brian Ness, ITD director. “Our team has embraced this philosophy. The end results are award-winning projects that improve customer service for the citizens of Idaho.”

Under Ness, ITD has won 20 AASHTO President’s Awards, more than any other state.

Galloway & Co., a national architecture and engineering firm headquartered in Denver, has acquired Utah-based JRCA Architects. JRCA is known for its design of health care, public works and public safety facilities as well as government and justice centers. The firm’s work in these markets will complement Galloway’s portfolio in the commercial, multifamily, industrial and federal markets.

Galloway has grown rapidly over the past eight years, with a 13% annual average growth. The firm’s expansion began in 2013 with the opening of its first regional office in Salt Lake City. Since then, Galloway has added five additional offices in Colorado, Utah and California. This is Galloway’s second acquisition in the Utah market.

The city of Longmont was recently awarded the Water Environment Federation’s 2021 WEF Project Excellence Award, a national distinction granted to projects executed with excellence and innovation in the water sector.

The city’s public works and natural resources department and its consultants CGRS Inc. and Carollo Engineers won the award for the Biogas Treatment and Renewable Natural Gas (RNG) Fueling Station project, a groundbreaking resource recovery and reuse system that treats and converts biogas produced at the city’s wastewater treatment plant into RNG for vehicle fuel. This project is the first of its kind along the Front Range.