This website requires certain cookies to work and uses other cookies to help you have the best experience. By visiting this website, certain cookies have already been set, which you may delete and block. By closing this message or continuing to use our site, you agree to the use of cookies. Visit our updated privacy and cookie policy to learn more.
Home » Ogden BRT Line Expansion Will Link Key City Sectors
Mountain StatesMountain States Construction Projects
Digging Deeper | Transit

Like its ever-expanding fleet of electric buses, the Utah Transit Authority’s project to build a 5.3-mile bus line in Ogden continues to shift gears.

The $120.5-million project has been in a state of flux since its March groundbreaking, as a severe materials and labor shortage constantly shifts delivery times and work orders. The Ogden/Weber State University Bus Rapid Transit line will link the Utah city’s downtown light-rail station with McKay-Dee Hospital via Weber State University. The route brings multiple stakeholders to the project, including the Federal Transit Administration and the city of Ogden as well as the hospital and the university.

“It’s probably more stairs than I have ever built in my entire career,” Gibbons says.

Crews worked six or seven days a week on campus throughout the summer to finish the landscaping and concrete placement and build two bus stations, multiple plazas and a duck pond. The heaviest work on this part of the project needed to be completed for fall 2021 classes. “We had three months to essentially demolish all [the outside areas] of central campus and then build it back,” Gibbons says. 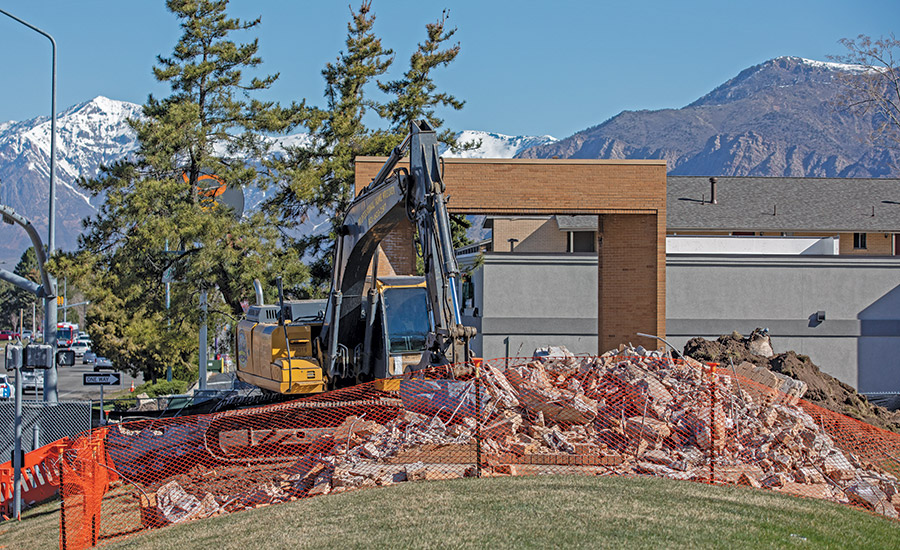 As the project progressed, its scope and costs grew, pushing back the opening date by a year.
Image courtesy of Utah Transit Authority

Stacy and Witbeck joined the project in late 2019, back when UTA planned a smaller, $101-million effort. But the project ended up expanding by a third, requiring more funding and pushing back its opening date by a year.

“The more people got interested, the more they wanted,” Gibbons says.

Besides the university, the project team has four other major stakeholders to consider. Much of the route covers roads owned by either the Utah Dept. of Transportation or the city of Ogden. One of the new stations sits at McKay-Dee Hospital’s entrance, and construction activity can drastically affect its operations. The 50-ft-long bus stations add an artistic flair to the project, Gibbons says, with metal canopies and precast concrete columns designed to mimic the mountain cliffs. 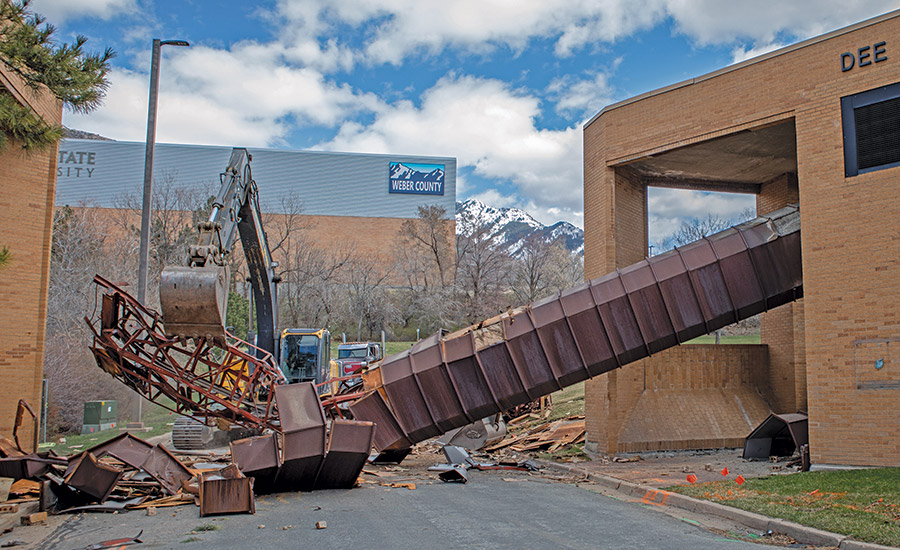 The bus line will include a new station at McKay-Dee Hospital, requiring some demolition work and careful planning so the project doesn’t disrupt hospital operations.
Image courtesy of Utah Transit Authority

Construction also began before the project had acquired all of the most desirable rights-of-way, says Andrea Pullos, UTA project manager of capital construction.

“We’re trying to make sure the contractor can keep working in a logical and efficient manner,” Pullos says. “For a few months, it looked like touch and go, but we’re there now. Working with an existing footprint and existing buildings is always a challenge.” 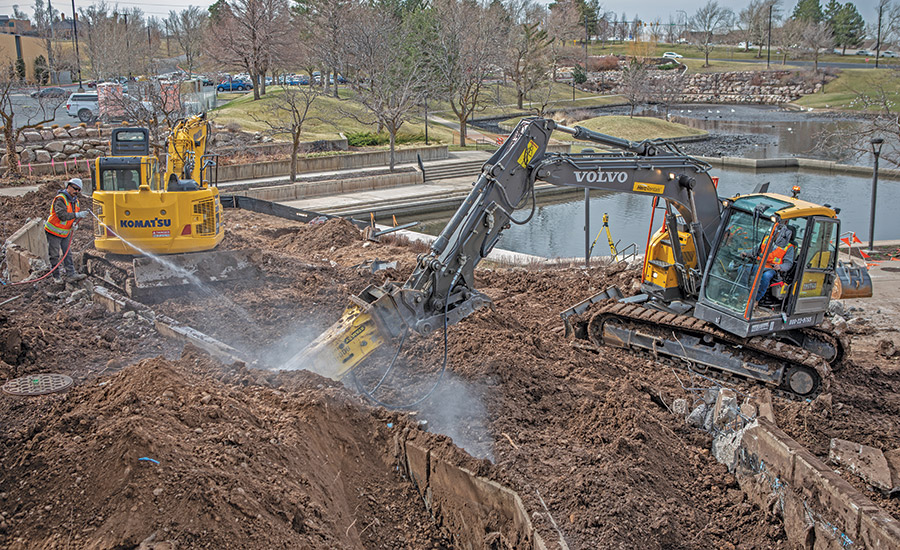 To encourage the UTA to acquire the best properties, Gibbons says the construction team located $100,000 that could be saved by added efficiency and kept everyone updated on its progress.

“We actually paid the owner to get properties ahead of schedule,” he says. “It really got the right-of-way acquisition group engaged. They felt like they were winning awards. Every week we opened the meeting with, ‘We’ve got this property here, and that’s another $5,000-$10,000 saved.’” The strategy yielded about $50,000 in savings.

Incentives also worked the other way: Stacy and Witbeck took $100,000 of its profit margin and combined it with another $100,000 of matching UTA money. Using the funds, the stakeholders hold a quarterly lunch to deliver report cards to the contractors with financial incentives.

“Based on what scores you get, you get money back,” Gibbons says. “We call it our performance reviews. It’s not just the client, but it’s the city, state, university and hospital telling us what they like and what we can do better. It’s kind of a different way to do partnering—more intimate, and it’s very candid.”

The project itself remains on track for an August 2023 opening and is about a third completed, Gibbons says. Flexibility is key to overcoming challenges with traffic, materials and labor. “We’ve touched every piece of this route, but there’s nothing 100% complete.” 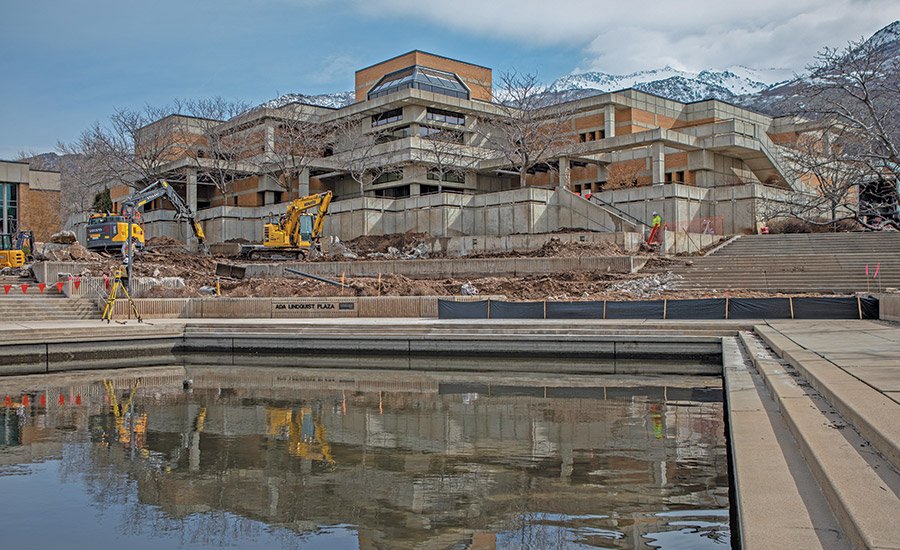 Procuring the total 7,000 cu yd of concrete needed for the project continues to be a challenge. Many placements must be ordered a week in advance and waiting lists are common.
Image courtesy of Utah Transit Authority

For Paul Franzen, work on the bus line project has been a juggling act.

The president of ACME Construction helps procure and place the project’s 7,000 cu yd of concrete, a task complicated by constant material shortages. ACME is about halfway through the concrete portion of the project and continues to contend with difficulties finding enough manpower and concrete.

“Before COVID, we could call the day before or even the day of the job and say we need concrete at a certain time—no problem,” Franzen says. “Now we have to order concrete a week in advance, and there’s a waiting list.”

Typically, a crew can place four loads of concrete a day, Franzen adds, but due to material shortages his crews can end up placing one load a day or one load every other day.

“One time we were on Washington Boulevard doing concrete pavement,” he recalls. “We had asphalt scheduled for next day. Everything was lined up. Then we ran into last-minute engineering changes after we set the form. We couldn’t get the concrete we needed to adjust, and it ended up adding extra days to the schedule.”

Organization is key, says Franzen, who also points to the hard work of concrete supplier Jack B. Parson Ready Mix. Sometimes if the available concrete runs short, the team will shift a delivery to another location to keep the work going. 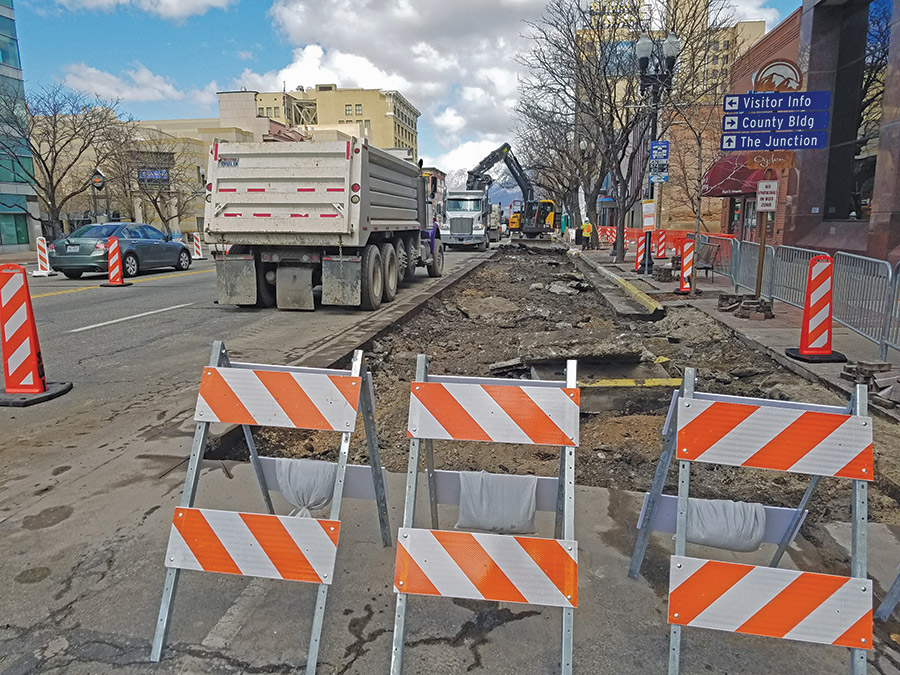 Construction began before the project team had acquired all of the most desirable rights-of-way, prompting the team to develop creative incentives to get the best properties and most efficient corridors.
Image courtesy of Utah Transit Authority

But shifting deliveries can cause additional issues. WSU selected a Parson proprietary mix for its portion of the project, a concrete that is more durable and resistant to cracking due to the area’s freeze-thaw cycle. “If we order that mix and then end up going somewhere else that doesn’t require it, that adds another variable,” Franzen says.

Using American-made concrete is another top priority for a project partially funded by the Federal Transit Administration, Gibbons says. “Utah has three cement suppliers. One shut down and one caught fire and was down for months, so we were down to one-third of our cement allowance.”

Despite the challenges, Gibbons credits the project’s continued momentum to strong partnerships among the stakeholders, owner and contractor as well as the 26 subcontractors involved. “You would think with five stakeholders, and four of them not the client, they’re going to want stuff for free. You would think that would be super challenging,” Gibbons says. “But everybody worked together well. If it wasn’t for all the COVID-related issues, this would be a pretty smooth project.”