This website requires certain cookies to work and uses other cookies to help you have the best experience. By visiting this website, certain cookies have already been set, which you may delete and block. By closing this message or continuing to use our site, you agree to the use of cookies. Visit our updated privacy and cookie policy to learn more.
Home » Sloan Security Group Chosen 2021 Specialty Contractor of the Year
Mountain StatesMountain States Construction Companies

Sloan Security Group nearly doubles its regional revenue in a single year by taking on more private-sector clients and building on its public work.

To raise money for his four teenage sons’ education, Ed Sloan launched Sloan Forest Construction in Boise in 1991, intending to support the timber industry. The firm shifted to fencing remote wildlife properties as the forestry industry faltered in the mid-1990s, then expanded into highway fencing before eventually becoming a full-service perimeter security system contractor.

Company CEO Brice Sloan says the firm’s trajectory can be summed up as follows, “very small, basically a couple of guys in a pickup, that’s evolved into a top three specialty security contractor.” He adds that the firm got its start “doing the work that no one else wanted to do out in the woods.” That experience included working with the U.S. Bureau of Land Management, which helped the company gain exposure in the federal contracting market. 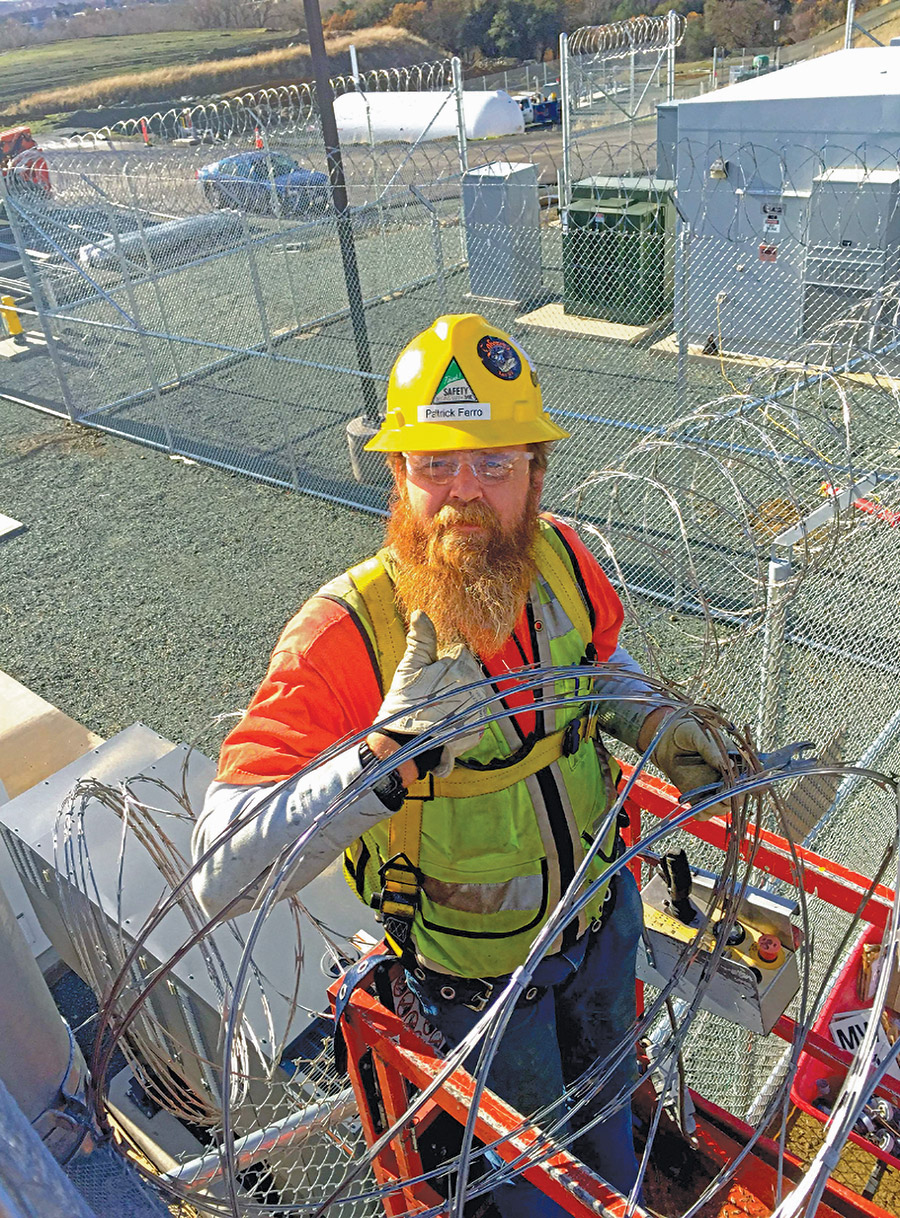 That experience led Sloan Security to pursue a contract to secure Idaho’s Mountain Home Air Force Base in the late ’90s, a project award that solidified its interest in federal work. The company went on to win another major project for the missile defense program in Fort Greely, Alaska, in 2004, and “from there on, we were solidly in the security industry,” Sloan says. The company’s name was formally changed to Sloan Security Group in 2009.

Sloan says the firm is seeing the “healthiest and largest backlog we’ve ever had.”  Its regional revenue nearly doubled from $3.4 million in 2019 to $6.1 million in 2020. That work makes up 30% of its overall revenue of nearly $20 million worldwide and is among the reasons why Sloan Security Group was chosen as the 2021 ENR Mountain States Specialty Contractor of the Year.

“[We got our start] doing the work that no one else wanted to do out in the woods.”
— Brice Sloan, CEO, Sloan Security Group

Though its work in the government market was crucial to the firm’s early success and still makes up about half of Sloan Security Group’s business, the company has diversified into the private sector. Sloan found a niche market providing perimeter security for corporate campuses, particularly in the technology space. The company’s footing in this market grew quickly after it completed a perimeter security system project for one of the world’s largest computing and software companies in California in 2017. Firm leaders remain bullish on opportunities in this market, noting that Silicon Valley companies have made a concerted effort to harden their security in the light of increasing threats.

The firm’s ownership transitioned from Ed Sloan to his sons in 2018, and the company’s core focus continues to be security systems construction, which makes up about 85% of its revenue. Sloan Security has also broadened beyond construction and installation to provide security design and consulting, including controls and surveillance systems. 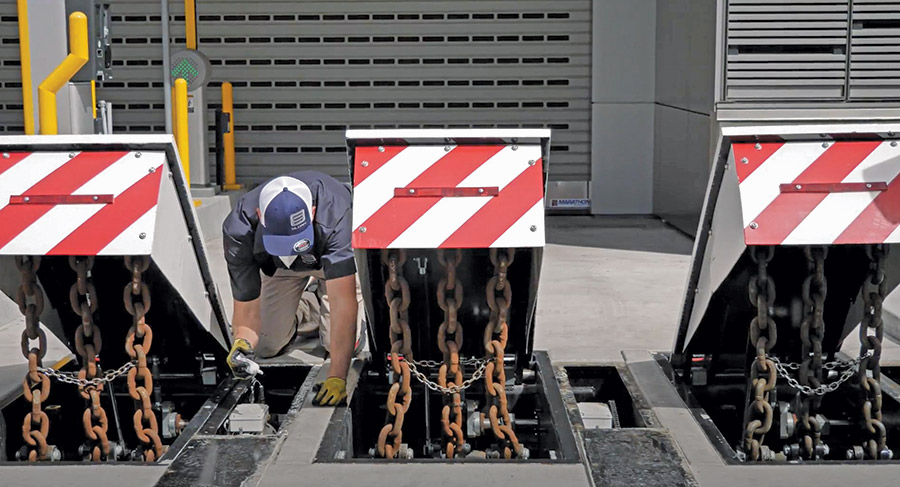 The company launched a maintenance and service group to address ongoing security needs at large event facilities such as the Chase Center.
Image Courtesy of Sloan Security Group

Beyond its core construction and design group, the company also started its own fabrication shop to help support projects where the scope requires fabrication or welding.

“We’ll make our own gates or bollard covers,” says Hank Vincent, chief financial officer for Sloan, adding that it can also “handle fabrication for other security product manufacturers.” The dozen or so employees in the firm’s fabrication shop also support its third department, its maintenance and service group.

“Perimeter security systems are becoming much more complex,” Sloan says, adding that “having design, engineering and installation … all the way to training and maintenance through the equipment life cycle” is important to serving customers that are facing increased and varied threats.

Employees travel to jobsites to help with commissioning, often in the Pacific Northwest or California, and the firm has opened an office in San Jose to better support Silicon Valley area projects, which make up the other half of its backlog. Increasing federal work has landed Sloan Security projects in more than 30 states and several U.S. embassies, including ones in Papua New Guinea and Saudi Arabia.

Additional geographic expansion may be in Sloan’s future. The company has most recently focused on growing its markets in Utah and Colorado, where it is currently working on a $10-million security project for the Utah State Prison system and recently completed installation of crash-rated bollards at The Denver Mint. 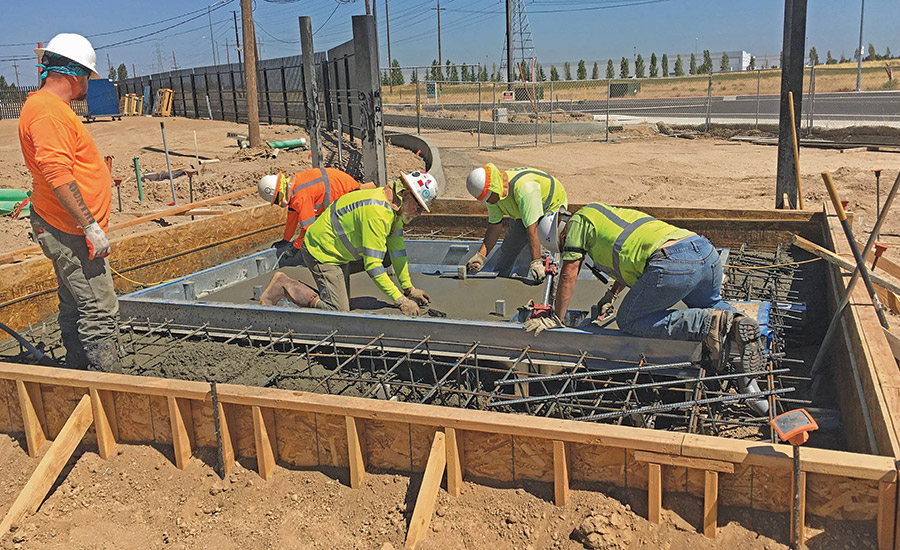 A Reputation for Innovation

South Bay EDC Inc. is a Phoenix-area government contractor that has worked on numerous federal projects with Sloan during the past 20 years. Paul Renteria, South Bay EDC owner and president, says his first experience with Sloan was at the Marine Corps Base Camp Pendleton in California, where they worked together to secure the airfield with gate-access control and perimeter security.

The project was “foundational to the relationship,” which, according to Renteria, has since developed into a partnership where “we can truly team together and have their people actually work on our behalf.”

“They’re always trying to figure out how to better themselves as a company and how to become more competitive in the marketplace.”
— Paul Renteria, Owner and President, South Bay EDC

“They’re always trying to figure out how to better themselves as a company and how to become more competitive in the marketplace,” Renteria says, noting how Sloan Security started its own fabrication arm and how it works with vendors on the design side to foster innovation.

Sloan says the construction and innovation components “go hand-in-hand” and that the firm’s efforts have led to recognition by the Idaho Technology Council as its Innovative Company of the Year in 2018.  He says it’s built into the firm’s culture, adding, “It’s one of our five values: safety, collaboration, integrity, innovation and professionalism.” 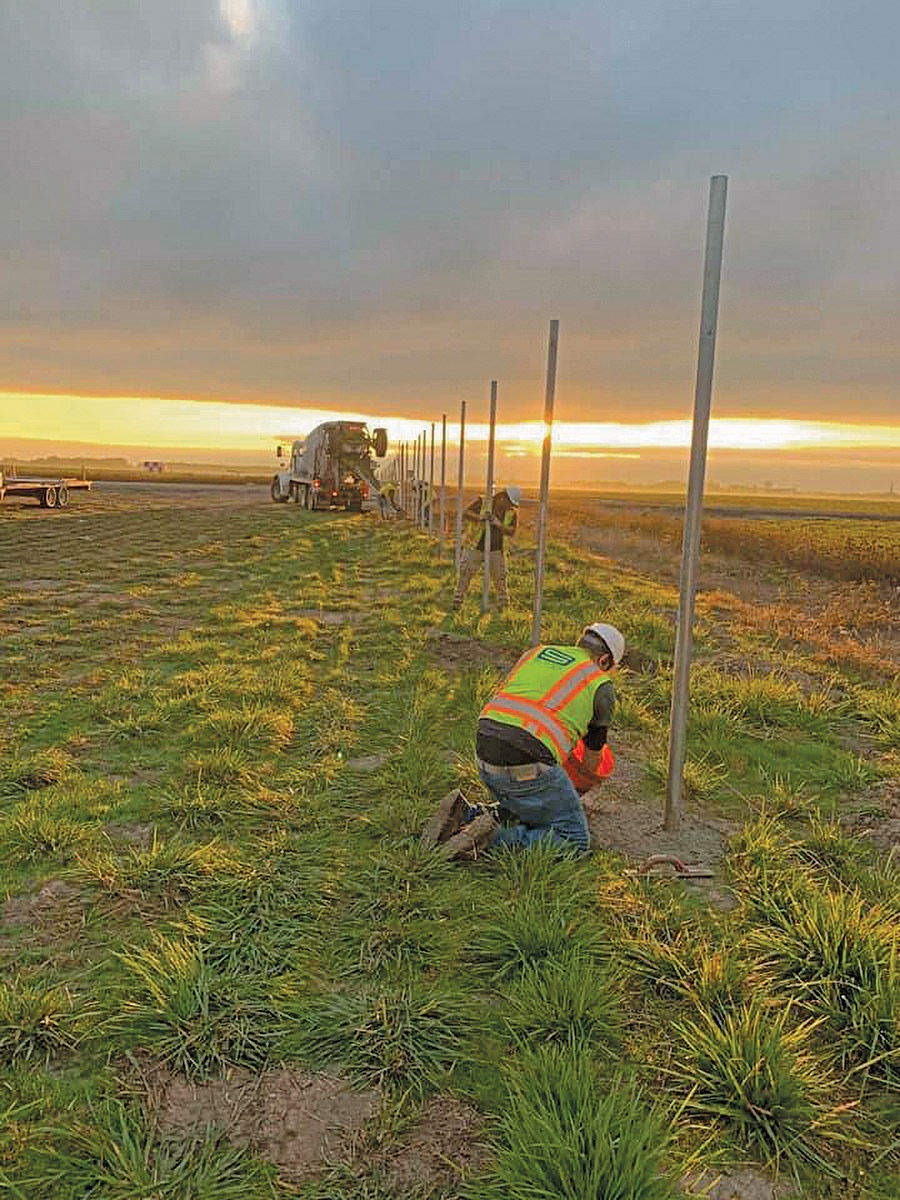 Beyond managing projects and maintaining sustainable growth, the firm is facing the same challenges as many others in the industry, Sloan says, noting impacts from COVID-19, supply chain issues, inflationary pressures and finding talent in a competitive landscape. He says the firm has taken steps to address supply chain issues “by bringing a lot of our work in house, even to build our own electronic devices.” Although Sloan says the environment is challenging, “it’s really a credit to our team that we’re doing as well as we are.”

Indeed, when asked the secret to their success, Sloan and Vincent both respond, “People!” Sloan adds, “I know it sounds cliché, but we have a really, really good team.”

The company’s employees must agree, as Sloan Security has been named among the 2021 Best Places to Work in Idaho by the Idaho Press, an honor it also received the previous two years.

Vincent says people come to Sloan “because of the type of environment that we foster here. Most people at this company have a really entrepreneurial-type mindset,” adding “we have 85 people right now, but I think people can see the future, and they know we’re going to be a lot bigger in the next five to 10 years.”