This website requires certain cookies to work and uses other cookies to help you have the best experience. By visiting this website, certain cookies have already been set, which you may delete and block. By closing this message or continuing to use our site, you agree to the use of cookies. Visit our updated privacy and cookie policy to learn more.
Home » California Based Firm Thrives Outside Its Power Core
MidAtlanticMid Atlantic Construction Companies
Specialty Contractor of the Year

California Based Firm Thrives Outside Its Power Core

In the short space of nine years, Helix Electric has become firmly invested in metropolitan Washington, D.C., not only as a provider of electrical contracting services, but also as a supporter of employee development and local charitable causes. Some regional observers may be surprised to learn that the company they know from its office in Chantilly, Va., is actually headquartered in San Diego and has most of its other offices in Western states.

Brady Hill, Helix vice president, says that approach has been central to the company’s sustained success a continent away from its home base. He credits Helix’s investment in training and development for more than tripling the company’s MidAtlantic vertical building market revenue to a projected $80 million this year from $25 million in 2019.

“We have reinforced our strategy to expand our diversity from our professionals and craftspeople to our clients, and types of projects that we pursue,” says Hill, who has held leadership positions at other Helix offices since joining the firm in 1999. “We have become much more intentional with employee engagement at every level, engagement with our clients, and how we collectively work with owners and developers to invest in community outreach.”

Those attributes have also enabled Helix to build long-term collaborative relationships with the region’s top contractors and construction managers, according to Hill.

For Reston Gateway, in northern Virginia, Helix teamed with Clark Construction to build a 1.4-million-sq-ft, twin-tower office core-and-shell complex that will be home to the North American headquarters of Fannie Mae and Volkswagen. More than 100 electricians were involved in building a complete electrical system for the complex. The system includes five 5,500-amp main switchboards that feed all electrical loads for both towers and more than 300 subpanels throughout the buildings’ standard electrical rooms.

Terry Simon, Clark senior vice president, says that Helix’s professionalism and can-do attitude were particularly welcome as the project unfolded in the midst of the coronavirus pandemic.

“We also appreciate their solutions-oriented approach, which is important when we encounter a challenge.”
—Terry Simon, Senior Vice President, Clark Construction

“Everyone from the leadership down contributed to keep the project moving safely,” Simon says. “We also appreciate their solutions-oriented approach, which is important when we encounter a challenge.”

On a 160,000-sq-ft renovation for Children’s National Hospital Research and Innovation Center, Helix teamed with Boston-based contractor Suffolk. The project, located on the former campus of Walter Reed Army Medical Center in northwest D.C., converted four 80-year-old buildings into modern medical and research space for rare diseases and genetic medicine. The project also includes a conference center with a 300-seat auditorium and an outpatient primary and specialty care services facility. So close was the collaboration that Children’s National Hospital dedicated the renovated facility’s main electrical room in honor of Jim Culver, a Helix construction superintendent who died during the course of the project.

Helix Electric’s High-Profile Construction Efforts In the MidAtlantic Include:

Tysons Central
Tysons Corner, Va.
Helix Electric is working with the joint venture of Clark Construction and Foulger-Pratt Construction on a 20-story building. It will include more than 388,000 sq ft of office space with virtually column-free floorplates, 19,000 sq ft of retail, three levels of below-grade parking and seven levels of above-grade parking. Designed to achieve LEED Gold certification, the building is scheduled for completion next year.

Australian Embassy
Washington, D.C.
Crafted to showcase Australian design, materials and architectural excellence, the 220,000-sq-ft, six-story building on Massachusetts Avenue NW will feature a custom curtain wall system and interior glass atrium as well as open public spaces, an exhibition gallery and office and event spaces. Clark is lead contractor for the project, which is set to open in early 2023.

Helix’s ability to continue carrying out such large projects in the face of industry-wide labor shortages has required the firm to apply the same attention to detail in management and recruitment. Hill says the process starts with attracting and hiring “smart individuals who take pride in their work and have the humility to continuously improve.” He adds that providing them with the equipment, training and incentives for success “empowers them to show up every day as the best version of themselves in order to reach their maximum potential.”

Being part of a larger, nationwide firm provides Helix’s regional offices with the resources to help develop those individuals, even before they become employees. Along with taking part in teaching partnerships with several area vocational and technical schools, the firm works with colleges and universities nationwide to keep its technical curricula in step with industry needs and expectations. A year-round stream of cooperative education students and interns likewise provides aspiring professionals with an opportunity to gain experience. 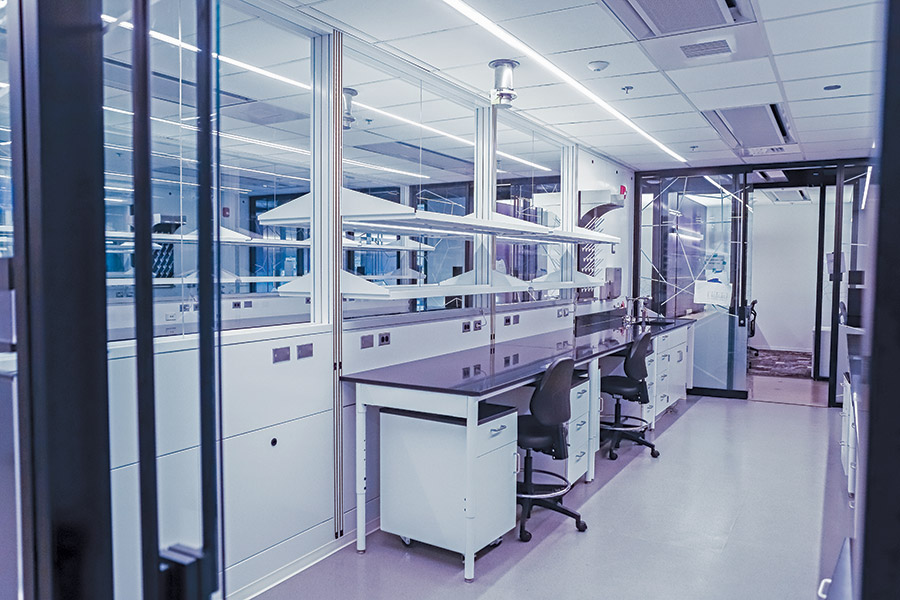 Hill is particularly proud of Helix’s Project Engineer to Project Manager program, a national four-year academic and experiential learning process that helps project-managers-in-training hone their leadership skills. The company has adopted other measures to keep its personnel resources balanced while also remaining competitive. Hill says that while prefabrication was already in use at Helix when he joined the company, conventional time-saving practices have increasingly evolved to include eliminating waste and enhancing value for customers.

“That also includes becoming more lean and leveraging the use of [building information modeling] to develop assemblies utilized in the design and cost estimating process,” Hill adds.

Prefabrication complements a safety culture that Hill says empowers electricians and apprentices to stop work that they perceive to be unsafe.

“Our daily routine is having the discipline to start each shift with a pretask plan reviewing all hazards specific to each task and allowing each electrician to voice their concerns and collectively offer solutions how to best mitigate those potential risks,” he says.

Hill points to a recent Safety Saturday event at the Independent Electrical Contractors Chesapeake facility in Laurel, Md., as testimony to the company’s safety culture. The semiannual event offers several certification courses and includes a trade show with industry trade partners and manufacturers. Although the event was not mandatory, Hill says more than 180 attendees were on hand to sharpen their knowledge of regulatory and internal safety best practices.

“Our cultural safety expectation is that our project teams will set the tone for all trades on every project,” he adds. That includes adapting to work processes that have been drastically reshaped by the coronavirus pandemic. “The silver lining is that our antiquated industry was forced to learn communication technologies and accept modified working arrangements in order to stay safe,” Hill observes. “Fortunately, this has made a tremendous improvement in how we interact collaboratively with the design partners, general contractors and other trades to resolve issues virtually with a sense of urgency that has been really impactful.”


A culture of giving

Helix has strived to make a similar impact in its figurative backyard, by building on its nationwide Helping Hands philanthropic initiative that is meant to help build stronger communities. Activities in the MidAtlantic area include an annual blood drive, donations of Thanksgiving food and raising more than $2,500 for skin cancer research. Additionally, the firm sponsored efforts to collect back-to-school supplies for families, local apprenticeship fundraisers, George Washington University sports programs, the IDEA charter school and Youth for Tomorrow.

The firm’s annual blood drive isn’t just for employees; they invite customers and other specialty contractors to donate. Clark Construction’s Simon said he donated in last year’s drive, which coincided with the outset of the pandemic. “We really like to see our major subcontractors be engaged in the community,” Simon says. “Working safety remains the top priority, of course, but it’s also important that firms be partners—not only with us, but also with the areas they serve.”

Helix Electric is looking forward to an even more eventful 2022. Besides celebrating its 10-year anniversary in the MidAtlantic region, the company is in the process of relocating to a 30,000-sq-ft facility in Manassas, Va. That move, the company says, will allow its management staff and regional logistics and prefabrication teams to be colocated under one roof.

“We expect the D.C. area construction market to continue to remain strong over the next few years and beyond,” he says, adding that contributing to the D.C.-region’s most complicated and challenging projects will provide a foundation for Helix’s further growth in the Eastern U.S.

And as has been the case for the past decade, “our mission, vision and core values will earn us those opportunities,” Hill says.