When completed, the solar field will generate enough electricity to power more than 179,000 homes

A massive solar project spanning five square miles is being constructed in the desert near Palm Springs, Calif. Once complete, the combined 450-MW Athos I and Athos II solar installations will cover more than 3,000 acres in Riverside County and generate more than 2,200 GWh per year of renewable energy, enough to power 179,000 homes.

The division of electrical contractor Rosendin was contracted by subsidiaries of SB Energy US Holdings One Inc., a renewable energy company and a subsidiary of SoftBank Group Corp., to design and build the $700-million project. SB Energy says the facility is being built to help meet California’s Renewable Portfolio Standard to advance renewable energy.

“There are more than 50 miles of roadway going through the property, and the amount of people and resources needed to complete this project is pretty massive,” says David Lincoln, senior vice president of Rosendin Renewable Energy Group. “The ability to bring together 300 to 400 electrical tradespeople in the middle of the desert and be on the same page and motivated to complete the project on time is really impressive

The jobsite covers 3,400 acres in a remote location in the California desert.
Photo courtesy of Rosendin

The project has not been without challenges. The solar farm is being constructed in the middle of the desert with remote project access and a 3,400-acre jobsite divided between four different agencies with myriad permitting requirements.

“I’ve been on solar projects that require one permit, and 10 or 12 might be a normal amount, but this was the most I’ve seen.”
—Rick Gonzales, Division Manager, Rosendin

“Working between the Bureau of Land Management (BLM), Riverside County, Indian communities and CalTrans has been challenging,” says Lincoln. “We had to get these highly regulatory agencies to all agree to the design while working with them during the pandemic when many offices were closed.”

Each of these four entities enforced its own jurisdiction, and every work area had to be carefully surveyed and mapped before construction crews could go in, says Rick Gonzales, Rosendin division manager at the Athos site.

“One day we would be working on the road in Riverside County, and the next day we would be dealing with BLM and a different jurisdiction, and then the tribe would come along to see if any (artifacts) were found on their land,” says Gonzales. “We have easements in each jurisdiction, but if we step outside the boundaries, they will fine us, and that makes it very difficult.”

Temperatures in the desert rose to about 120° F.
Photo courtesy of Rosendin

“The temporary power permit for the temporary site office trailer was the most challenging one,” he says. “It took over six months to get this permit, for a project that is 13 months long. We had to run a very large diesel generator until the utility connection.”

He says there were multiple reasons why it took the county so long to issue permits, including a new computer system, COVID-19, the retirement of key county employees and changing contractor deliverables. “I’ve been on solar projects that require one permit, and 10 or 12 might be a normal amount, but this was the most I’ve seen,” he says.

Besides dozens of permits, the project also requires a massive amount of infrastructure and labor. Rosendin is using union contractors and more than 400 employees, many who are member of the International Brotherhood of Electrical Workers (IBEW), to construct the project. At its busiest, the jobsite has seen 600 workers on site per day.

Gonzales says the overall complexity of the Athos I and II project led the Rosendin team to embrace the integrated project delivery (IPD) method. He says by involving all stakeholders in the permitting process and all facets of subcontracting and supply chain issues, the team has established a level of accountability and ownership responsibilities required to make this project a “huge success.”

Lincoln says when the team began the project in January 2020, Rosendin would convene its own in-house engineers, the client and key subcontractors and collectively work on design and project costs.

“The IPD process is a little longer upfront, but you get a more detailed and thorough set of documents to build from and your time frame is shortened significantly,” says Lincoln. “Wwith this IPD approach, there are very few, if any, change orders because all parties are involved in the design process and costing structure, so it’s been a great tool on the project.” 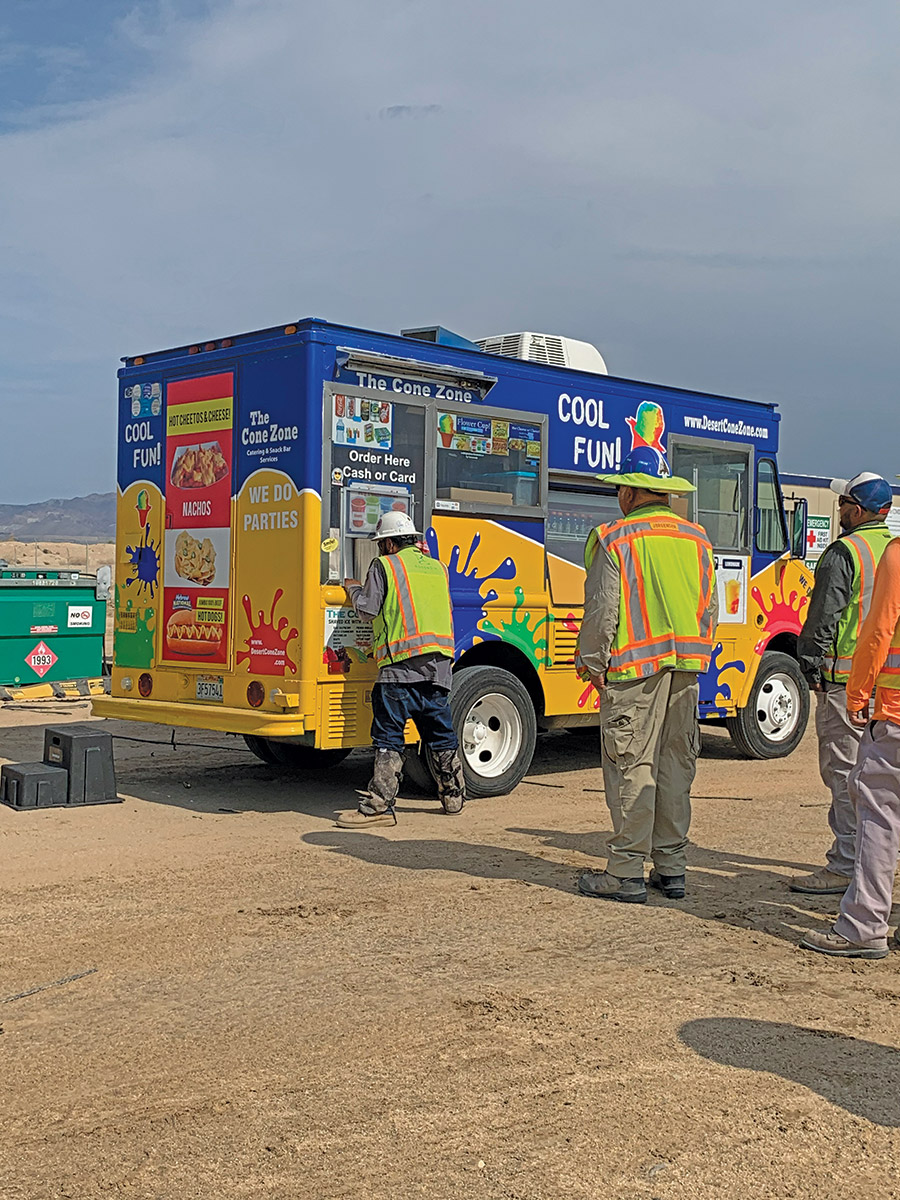 The team brought in an ice cream truck to help cool off crews.
Photo courtesy of Rosendin

Granite Industrial Inc. was contracted by Rosendin to perform all site demolition and clearing, site access road construction for 55 miles of access roads, site grading, survey for all post locations and installation of the nearly 230,000 foundation posts for the trackers

Tim Burhoe, director of preconstruction for Granite, says his teams are using a fleet of Vermeer PD10 pile drivers specifically designed for solar use to install the roughly 12-ft-long piles about 7 ft into the ground. He says two-person crews work each machine and can install an average of 5,000 posts per week for Athos I.

“This is a challenging process because we have to survey every point so we can put a giant nail with a ribbon on it that determines which pile goes at each location,” Burhoe says.

Located about 75 miles east of Palm Springs near the small town of Desert Center, the project site is remote and hot. To make it through 120°F summer days, Gonzales says crews started work at 5 a.m. and could leave early if they felt ill or too hot. He says the team set up cool-down stations with ice and shade, arranged water breaks every hour and had safety personnel on site to make sure no one was overheating. Rosendin even brought in an ice cream truck to serve the site.

That work was completed in late 2020, at which time Rosendin took over construction and contracted C&W to install an additional 35 miles of permanent 6-ft chain fencing and 28 entrance gates as well as fencing and gates for three onsite substations required for the project.

“Since C&W was the first contractor on site, one of the biggest challenges was being able to secure the site while still encountering many of the varied wildlife species that inhabited the area,” says Eric Marksberry, senior project manager and lead estimator for C&W Construction Specialties Inc. “Travelling around the vast site was also difficult, as roads had yet to be established and four wheel drive vehicles and equipment were needed for any task that involved traveling off of the main highway. Due to the remoteness of the Athos sites and the fact they were in an undeveloped area, it was also challenging logistically to have material, facilities and equipment delivered.”

The team also had to manage unusual items found on the site, including demolishing 30 large concrete aquaculture ponds, removing a couple of unexploded ordnance left from when the site was a World War II training base, which required a bomb squad to remove a date palm farm with roughly 100,000 trees.