The final commissioning of Atlanta’s $321.3-million water supply project in December 2020 signified more than just the completion of a five-year effort to bolster the city’s strained water supply resources. Begun amidst the looming specter of potentially devastating droughts and finished in the middle of a global pandemic, the multifaceted project overcame multiple technical challenges to win its race against the formidable opponent of time, thereby heroically securing Atlanta’s drinking-water supply for the next century.

Along with transforming a one-time quarry into a 2.4-billion-gallon raw water storage facility, the project team—led by the construction manager at-risk joint venture of PC Construction and H.J. Russell & Co.—mined five miles of 12.5-ft-dia tunnel through hard gneiss bedrock more than 400 ft below the surface. Blind-bore drilling created eleven 235-ft-deep to 420-ft-deep hard rock tunnel access shafts ranging between 8 ft and 40 ft in diameter. New 200-million and 135-million-gallon-per-day pump stations manage the two-way flow of water from the Chattahoochee River to the quarry to keep the treatment system in balance with demand.

Ade Abon, Atlanta’s senior watershed director, says the consequences of running short of water outweighed the many uncertainties associated with such an ambitious project scope and schedule. That, he adds, made CMAR the best delivery tool for the challenge.

“The city couldn’t solve the technical problems by itself, and we couldn’t afford a long, drawn-out design and construction process,” Abon says. “CMAR gave us the expertise we needed.”

“On a project like this, people get to see what other major stakeholders do,” Huie says of the approach’s benefit. “Because they know more about it and understand the nuances of it, they can coordinate their work and participate in the process at a higher level. That creates better efficiency and higher quality.” 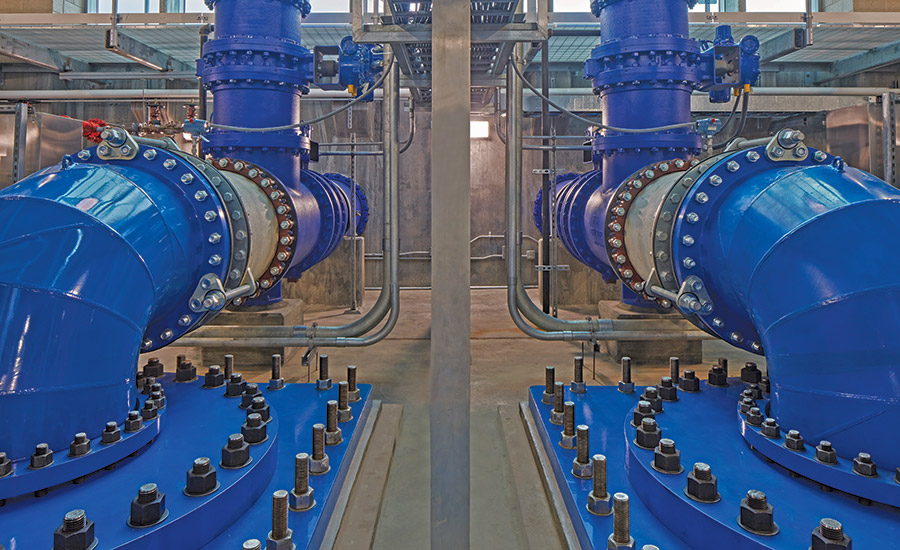 CMAR’s benefits were apparent when the PC/Russell joint venture joined lead engineers Stantec and River to Tap Inc. at the 30-percent design stage. With tunnel mining forming the backbone of both the water system and construction’s critical path, the original plan called for the project to be built in two phases.
When extensive preconstruction assessment of the design team’s concepts uncovered a potential budget and schedule issue with that approach, the city consolidated the work into a single contract. PC Construction says this enabled the team to redesign, re-coordinate and reprioritize the work, ultimately reducing several years and millions of dollars from the program.

When construction kicked off in December 2015, the project team still had a full plate of tunneling-related challenges to solve, some of which were as old as time itself. Adam Bedell, Stantec’s senior lead geologist and assistant resident engineer for the project, explains that the sharply varying characteristics of Atlanta’s Piedmont saprolitic soils and bedrock made accurate borings a must, particularly for such a long, complex route.

“We also had to consider the effect of a pressurized tunnel on groundwater conditions and its proximity to other existing underground infrastructure,” Bedell adds. 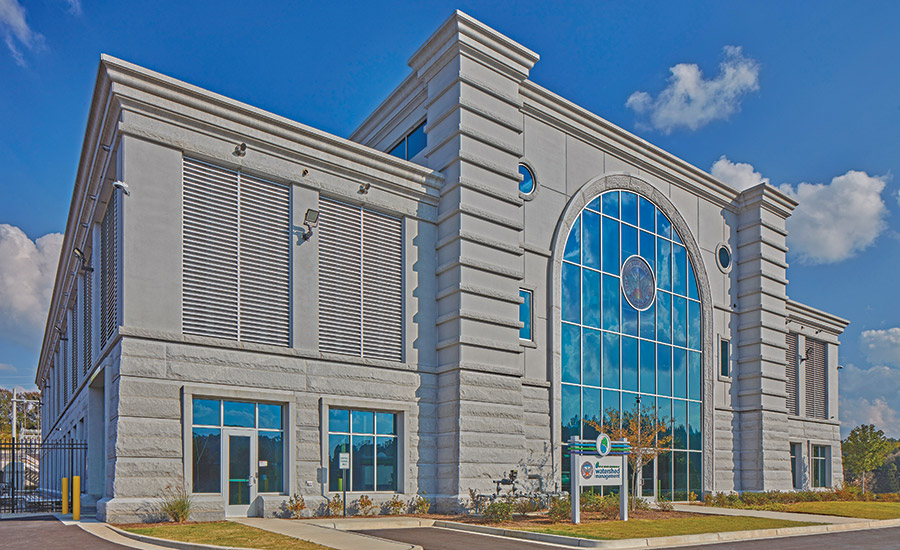 Then there was the matter of using a relatively inexperienced workforce to handle what would be a nearly continuous 48-month tunneling effort spread across four sites and combining drill-and-blast techniques with a 400-ft-long, 12.5-ft-dia tunnel-boring machine, nicknamed “Tunnel Mike.”

“The pace of the project would mean pressure to be productive, but we also had to make it safe,” Coibion says. He adds that close onsite supervision was critical to sustaining the emphasis on safety instilled during the four days of new employee training and was augmented through periodic follow-up sessions.
“Because the work was so spread out, we could easily lose that focus,” he says.

An unexpected safety dimension arose when Tunnel Mike encountered a zone of contaminated groundwater originating from a nearby industrial area. Slowing its pace to safeguard workers in the confined space until the hazard was past, the tunnel-boring machine was able to safely pick up speed and complete its five-mile journey, using GPS guidance and laser positioning to arrive within 3 in. of its preselected breakthrough point. 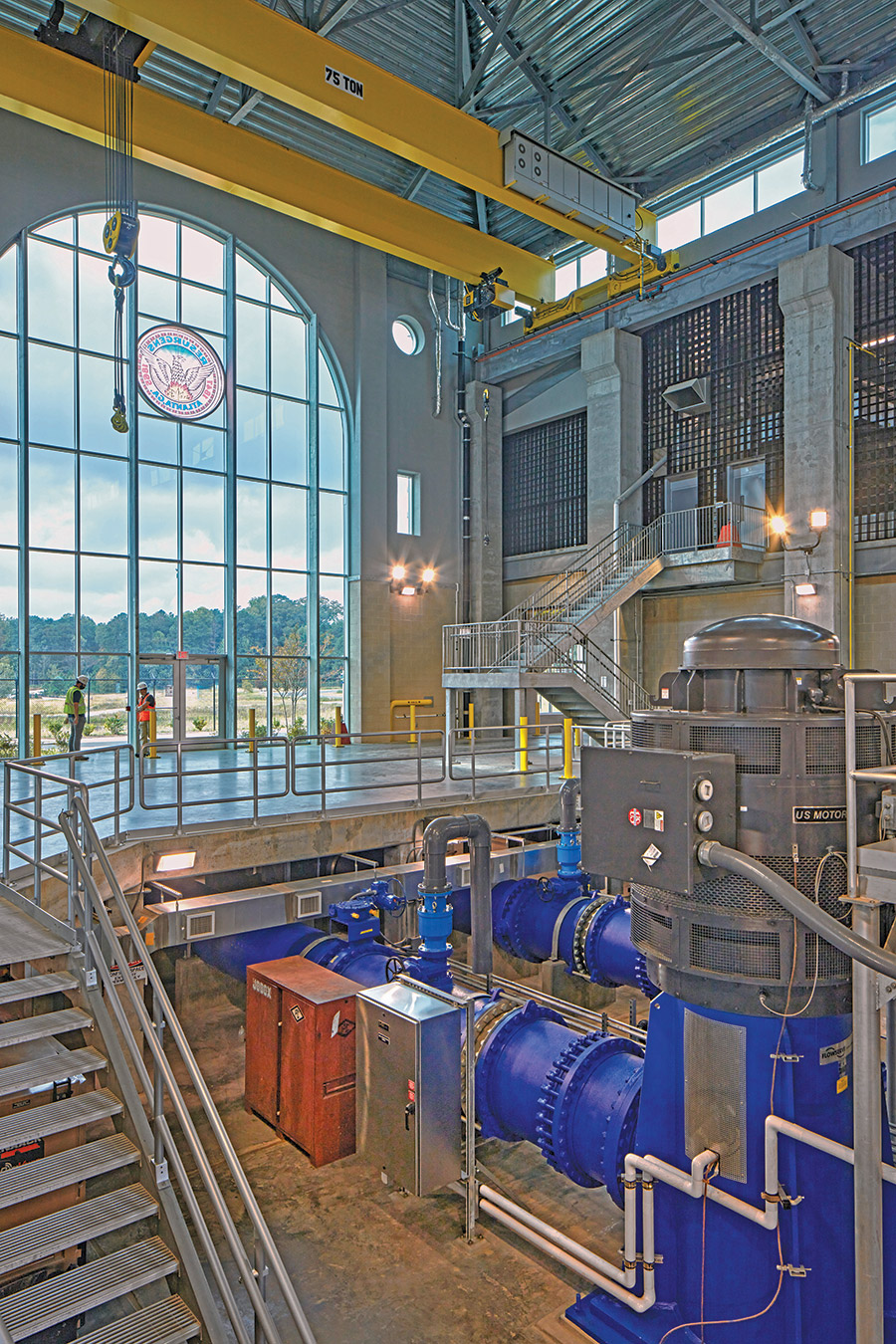 Another safety adaptation awaited the Atlanta Water Supply Program in 2020, as the spread of COVID-19 complicated the project’s final months. The project team implemented masking, social distancing and other measures as various elements were complete, but a different approach would be needed for the scheduled springtime assembly and installation of three 1,800-hp, 300-ft-long, 40-MGD submersible pumps fabricated by German manufacturer Andritz for the quarry pump station.

“The pace of the project would mean pressure to be productive, but we also had to make it safe.”
—Jacob Coibion, Project Manager, Guy F. Atkinson Construction

Huie explains that the pump supply contract required the guidance of onsite Andritz representatives, who were unable to travel to the U.S. due to pandemic travel restrictions. With the borders still blocked after a three-month postponement of the pump work and the project’s finish line tantalizingly in sight, the PC/Russell team sought an acceptable oversight alternative.

Taking advantage of the pandemic’s proliferation of remote communication options, the project team installed a network of high-definition cameras at the pump installation sites. Using a video conference platform, Andritz experts monitored each step of the work remotely, and in real time. By August, the pumps were in place and ready to go. 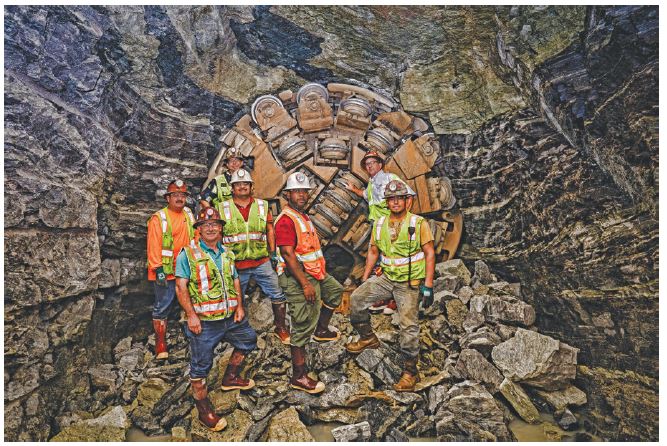 The project’s tunnel-boring team broke through in the fall of 2018.
Photo by Ulrich Brinkmann Photography

“Knowing they’d have no direct supervision, our team had made the most of the delay, preparing for the process and communicating with their counterparts in Germany to understand exactly how the pumps worked,” Huie says. “As it turned out, the people at Andritz said it was one of the better installation and commissioning jobs they had.”

The same could be said for the overall project. According to the PC/Russell joint venture, the work was completed for $5 million below the $321.3 million guaranteed maximum price, and there were no recordable incidents or lost-time accidents among the team’s 209,000 hours on the job.

Characterizing the project as “five years of very intense, difficult and challenging work,” Huie credits the CMAR-fostered collaboration for achieving successes and innovations that, under other circumstances and delivery approaches, might have been more difficult to accomplish.

“Day-to-day teaming of the project made it successful,” he says. “When we encountered problems, we all got together around the table and analyzed issues. Everyone shared the risk, understood the problems and participated in solving them. It goes to show that when people come together with a common goal and work in the best interests of the project, you can get some tremendous results,” he says.

Abon agrees, noting the importance of creating an environment where every participant has a voice and can contribute. “Without CMAR,” he says, “I don’t know how you’d do all that.”