This website requires certain cookies to work and uses other cookies to help you have the best experience. By visiting this website, certain cookies have already been set, which you may delete and block. By closing this message or continuing to use our site, you agree to the use of cookies. Visit our updated privacy and cookie policy to learn more.
Home » Divvy Corporate Headquarters: Best Project Interior/Tenant Improvement
Mountain StatesMountain States Construction ProjectsFeaturesBest Projects2021
Best Projects

This tenant improvement project for Divvy, a financial services firm, started in the midst of core-and-shell construction for the corporate headquarters and without a fully completed design package.

The building is home to more than 200 employees. The design mix of traditional and contemporary elements in the new office space seeks to complement the building’s modern black exterior and its distinctive LED lighting, which draws the attention of travelers on nearby I-15.

Wall paneling, crown and gridded-glass walls introduce a more traditional look, while the north of end of the building incorporates two-story volumes with crowned ceilings and columns, period furniture accents and polished concrete floors to achieve an upscale hotel lounge vibe for both large and small gatherings. 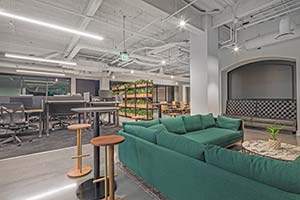 The project was delivered early due to the efforts of trade partners, who pulled together to ensure just-in-time delivery and adequate workforce support.

Before trade partners started work on site, leaders discussed scope, specifications and areas of concern with them, along with schedule and safety. Multiscope coordination meetings were also held among different trades to coordinate interface details where needed.

Because the design was not fully complete when work began, trade partners assisted with the review of drawings, allowing them to resolve issues such as the location of door frames, which were corrected to ensure doors could fully open before framing was completed, thus saving time and money.

Daily huddles helped team members hold each other accountable and allowed for quick resolution of issues.