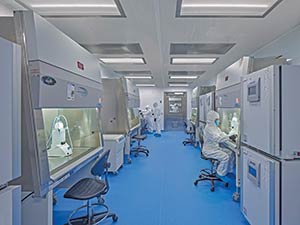 The T-30 Cell Processing Modular Facility is the first large-scale prefabricated and multimodular Current Good Manufacturing Practices manufacturing facility to be built in the nation, the project team says. It will be used by the National Cancer Institute to deliver groundbreaking cancer treatment. Its footprint spans about 14,200 gross sq ft and is supported by a 30-ft-deep auger pile foundation.

“I like that this was a bunch of modules placed inside of a box site,” one judge said. “I can see that [this process] is becoming more and more the way of the future to control quality and speed these modules being built at the construction site itself.”

The $28-million project is considered innovative for NIH as well as the construction industry at large. The industry “seeks to adopt new approaches to delivering pharmaceutical facilities to reach patients faster,” the team says in its submission. NIH’s T-30 facility represents a “successful test case inspiring others to follow their lead” and an emerging life-sciences trend with similar modular projects launching around the nation, the team notes. 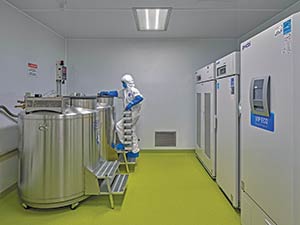 The 11-ft by 40-ft clean room modules weigh between 40,000  and 50,000 lb and include cell manufacturing suites, cell processing suites, clean room lab space, a cold storage room and office space. When 10 prefabricated clean room modules arrived on site, crews managed a complicated rigging operation to move the modules over the structural steel exterior building envelope and through the open roof to set them into position on their foundations. Because this took place only 40 ft from two fully operational medical and research buildings, the team closely coordinated vibration monitoring with users in the neighboring buildings to avoid any disruption to sensitive activities. Departing from a traditional stick-built method, the modules and most of the building systems were prefabricated off site at Germfree’s manufacturing plant while DPR conducted sitework and erected structural steel in advance of the module delivery. “This project will inspire others to follow their lead,” one judge noted.

Taking a design-build delivery approach, the team employed technical construction skills and offsite phasing and sequencing to advance the project on the constrained site while managing underground utility rerouting and other logistical challenges. 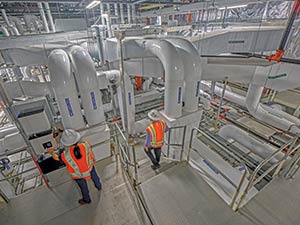 When NIH found the need to reconfigure the facility’s workflow plan during design to accommodate extensive programming changes, DPR sequenced project construction processes to avoid delays to the project schedule. The team, under NIH’s direction, enclosed the building and erected structural steel before the modules arrived. Then it reworked a rigging plan for dropping the modules in through the roof. That complicated the rigging, but saved three months on the schedule compared with traditional methods.