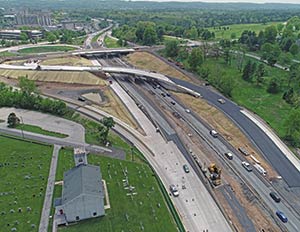 The central aims of this complex $96.6-million project were to replace the U.S. Route 422 Schuylkill River bridge with a modern, wider prestressed concrete beam bridge as well as to widen and reconstruct one mile of U.S. 422 between the state Route 23 and Route 363 interchanges.

An estimated 113,000 vehicles travel daily on this mile-long segment of U.S. 422 between the two interchanges, including many commuters traveling between the densely populated Philadelphia suburbs of Pottstown and King of Prussia and those going directly into Philadelphia.

Because of the limited number of river crossings in the area for diverting traffic to other highways, the team devised a four-phase maintenance and protection of traffic plan. It included multiple subphases to accommodate ample traffic capacity throughout the duration of the project.

One judge said that he liked the project’s “phased logistics,” in  which traffic was redirected onto  a temporary structure so that the team could gain access to the site.

Because the Schuylkill River is classified as a perennial stream, a navigable waterway, a Pennsylvania Scenic River, a warm water fishery and also as a migratory fishery, causeways could not extend across the river’s entire width.

To avoid harming wildlife native to the area, the team developed some special mitigation measures. For example, the team limited clearing and grubbing activities between Nov. 1 and March 3 to avoid impacts to the northern long-eared bat. They also created a redbelly turtle mitigation plan.

Another judge commended the project team for identifying and relocating cremated human remains and protecting threatened species, such as the long-eared bat.  The judge said, “They had to work around a schedule when the bats were roosting.” 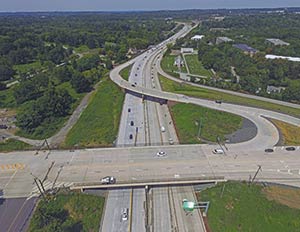 The judge also praised the team’s “traffic considerations” while building over the river and railroad line.

The team reconstructed the State Route 23 bridge over U.S. 422 and built a new flyover ramp that includes an unusual two-span curved steel girder bridge that will allow the future relocation of North Gulph Road.

The ramp includes a two-span, 193-ft by 44-ft curved steel girder bridge. The team had to consider what it terms “unique design loading,” challenging deck geometry and complex rebar detailing because of the structure’s 409-ft radius.

The team installed an underground stormwater management vault in the hill between the flyover ramp and Valley Forge National Historical Park. It is believed to be the first underground facility application on a Pennsylvania DOT site, the submission says. The reconstructed main five-span bridge is supported by “wall and tulip-shaped column piers with architectural surface treatments” that illuminate the river view and soften the visual impact of the bridge, the team says.  In all, the team compiled 378,000 worker-hours, with no recordable incidents or lost-time accidents.