The Wilson and The Elm

The Wilson and The Elm, a 1.3-million-sq-ft mixed-use development completed in May, now rises 300 ft above downtown Bethesda, Md.—and in the eyes of the Best Projects judges, it towers over the competition as well. It is a study in how a design and construction team can successfully cope with and adjust to many complex conditions and requirements.

The project, developed by Carr Properties, centers on an office building (The Wilson) with ground floor retail and two residential towers (The Elm) that sit atop a five-level podium containing above- and below-ground parking.

Below ground, the work was exceptionally complicated. For  one thing, the team had to create shell space to accommodate a future station for a light-rail line and a future tunnel for the Capital Crescent Trail.

That combination established the development as a central transportation hub for Bethesda. It also earned the project a local zoning exemption, allowing it  to exceed existing height restrictions by 50 ft and giving  it a spot in the Bethesda skyline. 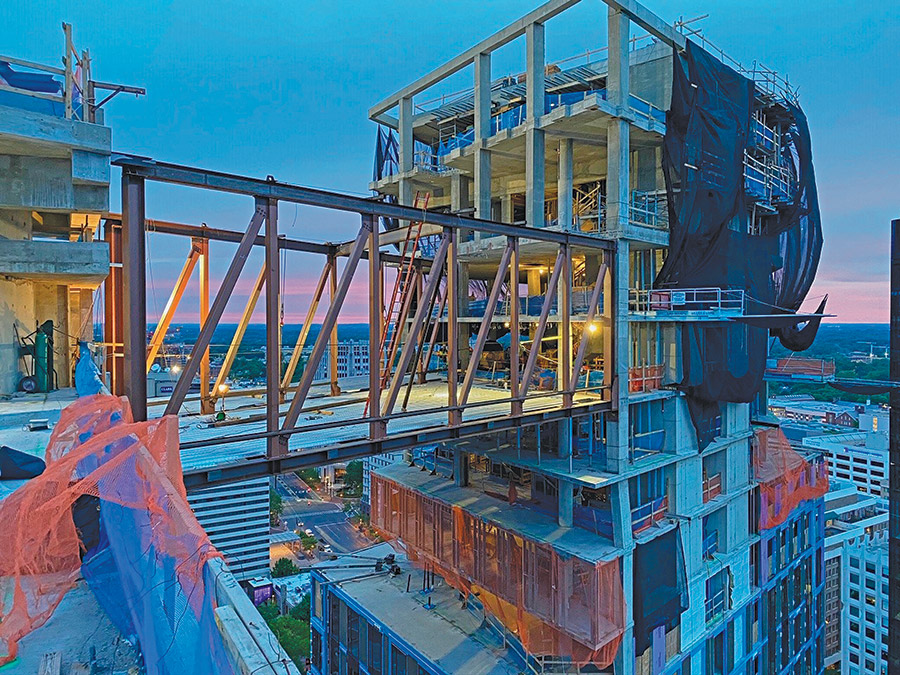 But that advantage also created significant challenges for the design and construction team. Under its contract, the rail station for the light-rail Purple Line had to be turned over to the Maryland State Highway Administration just six months after the start of concrete work. To meet that tough deadline, the team needed to deliver a 25-ft-tall by 50-ft-wide concrete station shell that spans 400 ft in length across the project’s below-grade parking garage.

Structurally, the shell bisects the underground space, which required concrete transfer slabs and beams to handle the loads of the two residential towers above. “The below-grade structure was challenging from the start because we had the Purple Line site, and the requirement on Day 1 was that the job had to be completed on time while we worked around it,” recalls Pasco Umbriac, a Clark Construction vice president.

“The belowgrade structure was challenging from the start because we had the Purple Line site, and the requirement on Day 1 was that the job had to be completed on time.”
—Pasco Umbriac, Vice President, Clark Construction

(Umbriac served as a judge for ENR MidAtlantic’s Best Projects contest but recused himself from judging The Wilson and The Elm project and Clark’s other projects under consideration in the competition.)

To stay on schedule, the design and construction teams collaborated to redesign the structure and eliminate reshoring of the space during above-grade construction of the towers. The shear wall designs proved to be the most difficult structural aspect of the project, says Ashfaq Ahmed, associate at structural design firm Tadjer-Cohen-Edelson Associates. The shear walls couldn’t pass through the Purple Line station. That meant most of them had to be transferred in the building above the station’s roof, according to Ahmed.

The use of 4D BIM models of the below-grade pour sequence allowed the team to preplan for the most efficient flow of work. In the end, the team delivered the station shell two weeks early. 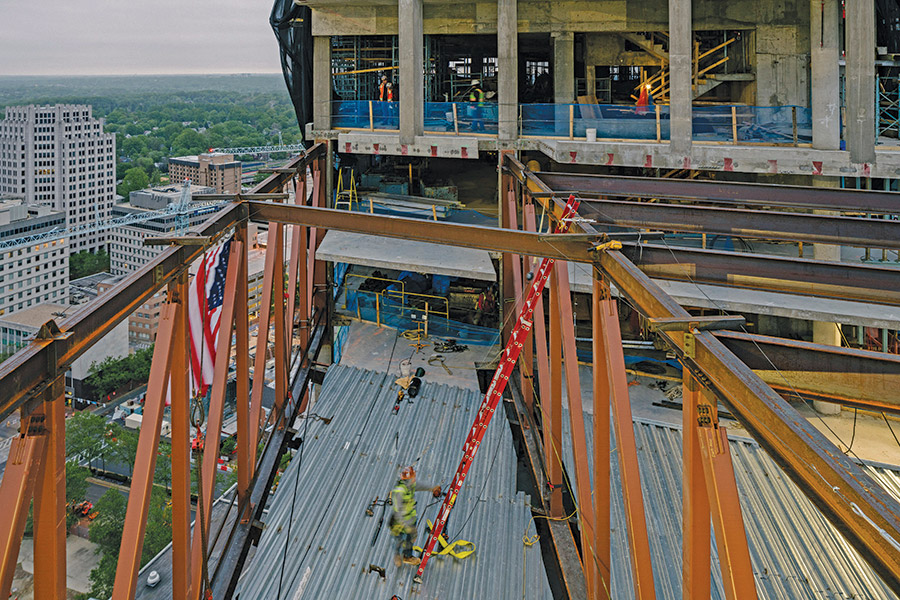 In order to ensure a proper fit and a smooth erection process, the team used virtual design and construction to create a 4D model of the placement of each bridge component.
Photos courtesy of Clark Construction Group LLC

In addition to the station, a Washington Metropolitan Area Transit Authority egress stair and ventilation shaft are located within the project site and had to align with the new building. WMATA, which has a Metrorail Red Line station nearby, required continuous access to the shaft throughout construction.

WMATA’s two vents now extend up into the building’s podium and exit at the second floor. The egress stair exits at the ground level.

To excavate 50 ft below busy Wisconsin Avenue while working in parallel with the Purple Line’s scope, the team coordinated to ensure that internal and external bracing elements could be installed without affecting the new below-grade shell or neighboring Purple Line work. The team leveraged a combination of detailed building modeling and laser scanning of the work in place. 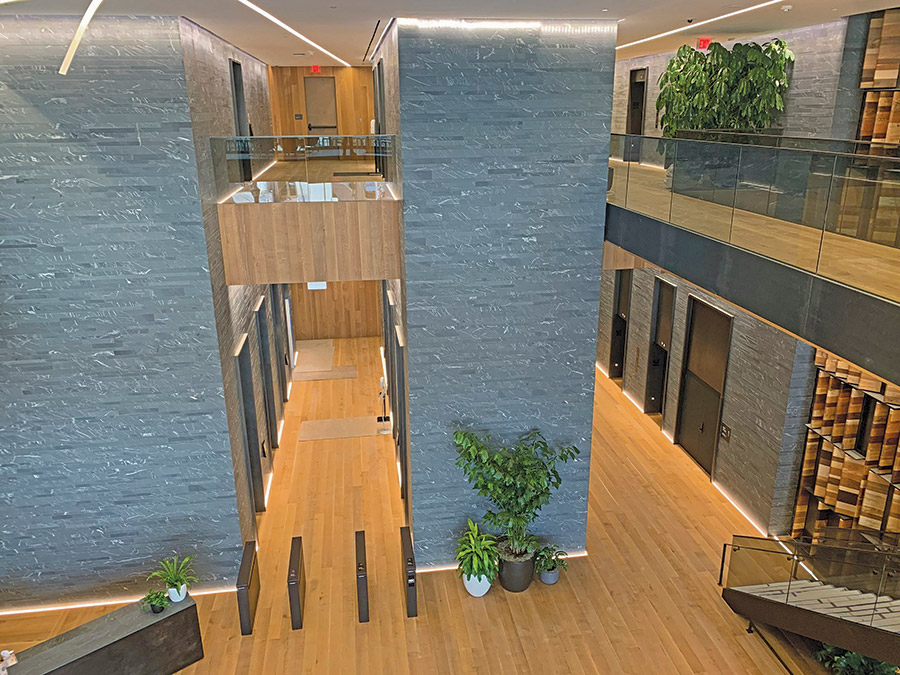 The selection of precise stone slabs ensured the consistency of the natural stone veining throughout the 30-ft-tall lobby walls.
Photos courtesy of Clark Construction Group LLC

Still, the strategy came with significant challenges. Umbriac says the station and related infrastructure required a “mixed bag” of internal bracing that crews had to work around. “That was less than ideal and added another element we had to coordinate,” he says.

Foundations also required a composite solution. Mat foundations could be used everywhere­­­­­­ except for the Purple Line station, where 30 4-ft-dia caissons were incorporated to avoid any pressure on the existing shafts.

Structurally, the podium is split vertically by an expansion joint between the 25-story commercial tower and the two residential towers, which are 28 stories and 31 stories, respectively.

In sequencing the job, Clark split crews into a commercial team and a residential team, working on coordinated but separate scopes. In all, more than 85,000 yd of concrete were required for the project, so each team divided the schedule to spread out the pours. The commercial team poured from 7 p.m. through the evening; then the residential team poured from 3 a.m. until the start of rush hour.

As the buildings began to take shape, design concepts were still evolving for how to create a connection between the two residential towers at the 28th floor.
Jack Moyer, director Shalom Baranes Associates and project manager for The Wilson and The Elm, says that Carr Properties wanted the two towers to share the same mechanical system. So rather than route everything from the top of one tower down to the podium and back up through the other tower, the team considered including an architectural element that could provide a link near the top of the buildings.

Moyer says the tower-to-tower connection “evolved from a simple mechanical connection to a pedestrian bridge, then to an amenity space within a sky bridge that offers amazing views.”

After 18 months of planning, the team devised a strategy to deliver a 60-ft-long composite steel and concrete structure bridge. The greatest challenge was successfully setting the two-story bridge trusses. Due to the height of the bridge above street level, the only option was to use a tower crane for steel erection.

But the truss sizes outweighed the crane’s load rating. So the team worked with the steel erector to find a way to fabricate the trusses off site without their bottom chords. That strategy would lighten the load enough to allow the tower crane to do the picks.

The team engineered a temporary bracing system and revised connection details to address the change in fabrication. 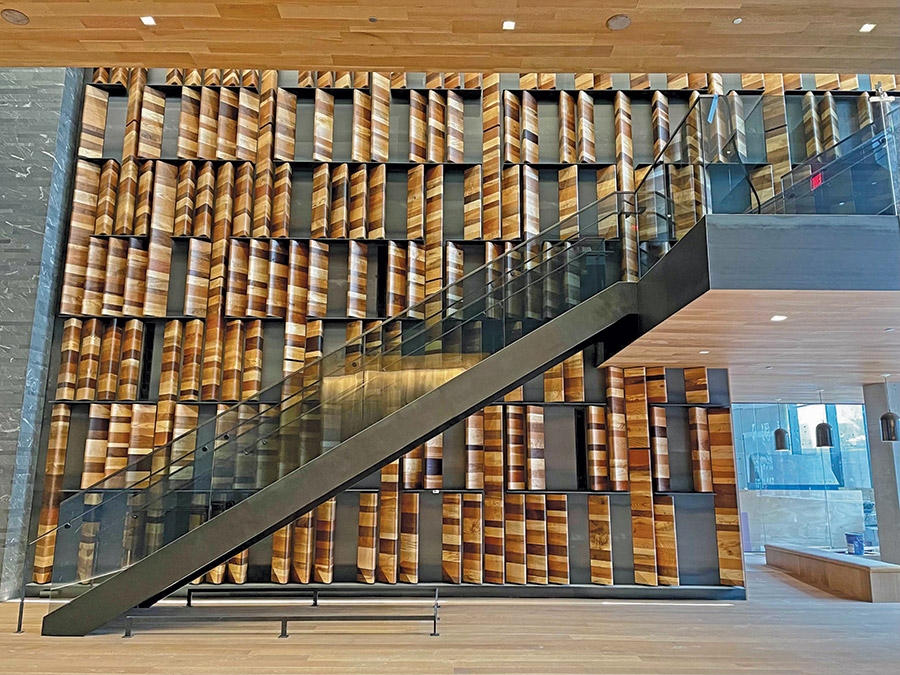 To ensure a proper fit and a smooth erection process, virtual design and construction was used to create a 4D model of the placement of each bridge component. Through that process, the team determined that construction of sections of the concrete structure on one tower needed to be resequenced to allow space for the large truss sections to be swung into place without interference. The team’s planning effort led to completing the steel erection ahead of schedule and without incident.

As the structure moved to the upper floors, interior work was underway below. The office lobby and penthouse feature walls composed of an assortment of 2-, 3- and 5-in. pieces of honed Pietra Cardoso stone with lengths varying from 8 to 48 in. Wall heights reached up to 30 ft, so stonework placement required planning long before installation. Blocks and stone slabs were reviewed at the quarry in Italy and building mock-ups were used to help attain the desired aesthetic. After reviewing the final in-place mock-up, the team added a 1/16-in. joint between each tile to prevent the natural stone from warping.

Despite the project’s many complexities, it was completed on time in May 2021 and on budget, with no lost-time accidents or recordable incidents.
Those accomplishments played a key role in the judges’ decision to name The Wilson and The Elm as ENR Mid-Atlantic’s Project of the Year.

“It had some great coordination, dealing with the Purple Line and needing to get that section turned over early on,” said one judge. “Then still being able to coordinate that pedestrian bridge 300 feet up in the air… and that’s on a site with a constrained footprint.”