This website requires certain cookies to work and uses other cookies to help you have the best experience. By visiting this website, certain cookies have already been set, which you may delete and block. By closing this message or continuing to use our site, you agree to the use of cookies. Visit our updated privacy and cookie policy to learn more.
Home » Building on 53 Years of Family-Owned Success
Texas-LouisianaTexas & Louisiana Construction Companies
Specialty Contractor of the Year

Building on 53 Years of Family-Owned Success

Stand-out service, expansion into growth markets and a rigorous training program empowered north Dallas-based painting and coatings subcontractor Cherry Coatings to rebuff the worst of the pandemic and improve its revenue through 2020 and into this year.

Cherry Coatings was fortunate in that many recently completed projects were awarded before the start of the pandemic and the firm had to hire additional personnel to complete them. Since 2019, Cherry has hired approximately 300 employees, bringing its personnel total to 1,100. Annual revenue increased by $18.16 million over 2019 to reach $79.89 million in 2020. The company also rose three spots on ENR Texas & Louisiana’s annual Top Specialty Contractors ranking to No. 24 for 2021. 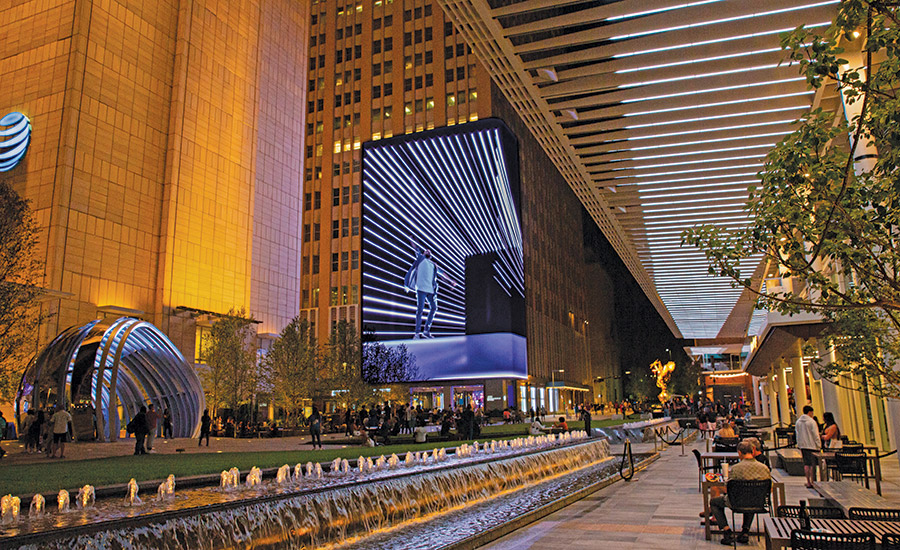 The $100-million AT&T Discovery District project in Dallas is anchored by a 37-story tower that serves as AT&T’s headquarters. Cherry Coatings painted the exterior and interior of the building for AT&T, a legacy client of 35 years.
Photo courtesy of Cherry Coatings

During 2020, the company aligned with Centers for Disease Control and Prevention protocols and told its employees, “If you don’t feel comfortable coming to work, we’ll find a way to make it work for you remotely,” says Zip Drain, Cherry’s Southwest region president. He notes that to accomplish this, the company invested approximately $200,000 on IT equipment for managers to work at home. In total, the company spent $500,000 to protect its employees from COVID-19.

In 2021, some projects were delayed and fewer new projects have started compared with the previous two years, but Zack Cherry, company president, and his brother Rocky, vice president, believe that growth opportunities in emerging markets, recruiting blue-chip employees and diversifying services will position Cherry Coatings for successful revenue growth in 2021. The company is projecting a “great year” of $92 million, Zack says.

He explains that the company has tapped the booming Austin market and was also able to open branches in Nashville and San Antonio. Additional offices are in Fort Worth and Houston. An office in Phoenix has been acquired and should open by the second quarter of 2022, Rocky says.

Cherry’s largest project last year — and largest ever — was a $10.4-million contract at the Kalahari Resort & Hotel in Round Rock, Texas, just outside Austin. Another major project completed in 2020 was Globe Life Field, home of the Texas Rangers Major League Baseball team, in Arlington, Texas.

In February, the company completed a $7-million contract in Dallas at the 51-story Thompson Hotel at The National, 1401 Elm Street — a mixed-use residential/hospitality project that is helping to revitalize downtown. Cherry Coatings has also recently worked on 10 Amazon facilities, which are multistory, million-plus-sq-ft distribution centers throughout Texas and the Southeast. Cherry Coatings painted the Catbird restaurant and the remaining interiors of The Thompson Hotel at The National, a redevelopment of the 52-story First National Bank Tower in Dallas.
Photo courtesy of Cherry Coatings

Zack and Rocky’s grandfather, Edward Ray Cherry, established a painting business in the 1940s. His wife, Louise, handled the operations side while he was in the field or developed the business. In the 1960s, he rebranded as Ed Ray & Sons Painting to incorporate sons Pat and William into the family business.

“While our dad, Patrick, was serving in Vietnam, grandfather closed his business, and when dad returned home, he worked for another painter, who died suddenly,” Zack recalls. “The general contractor was going to give the work to someone else, but my dad said to the contractor, ‘We’ll take the work.’” He and William, a former General Motors employee, completed the contract in 1968, and Cherry Coatings was the result.

“We are a family-owned business with a growth mindset.”
—Rocky Cherry, Vice President, Cherry Coatings

“Dad is 76 and is working with us as a consultant and still walks jobs,” Zack says. His uncle retired in 2009 and is no longer involved with the company.
Private ownership has challenges and opportunities. Even though the family does not anticipate acquisition, when this does happen for other companies, cash for expansion is often more readily available, Zack says.

But private ownership offers flexibility, Rocky explains. “You can be creative in case-by-case situations, and from that you become stronger. And, in a family business, you can trust everyone and rely on each other.” At the same time, family and business don’t always mix well. “You can get irritated, just like a husband and wife, so you have to keep it professional and take the emotion out of it,” Rocky adds. The brothers hope to keep the firm family led with the next generation — Zack has three daughters and Rocky has two.

Independence allows the firm to commit its dollars and in-kind services to many local charities and churches, including a shelter for battered women in the Austin area. The company also chose to raise money for the Nathan Adams Foundation, named for the 9-year-old son of a general contractor with which Cherry Coatings works. The boy had bone cancer, and because of the company’s efforts, he is in remission and has a prosthetic and can look forward to a full life.

At the Domain in Austin, the fourstory, 60,000-sq-ft Texas Restoration Hardware was completed this year. Cherry Coatings painted the interiors and common areas.
Photo courtesy of Cherry Coatings

Cherry Coatings plans no major changes because what the company is doing is working well. “We want to go places where people want to go,” Rocky says. “Business is very friendly in Texas, and Austin is a great example.”

While the company is always looking for quality employees, it has looked inward too, honing its employee training. “Most paint contractors are mom-and-pop shops and don’t have training programs,” Rocky says.

“Cultivate is one of our core values, so we emphasize developing not only yourself but others,” Zack says, noting that Cherry Coatings has four levels of training. First, top leaders meet with a business coach monthly to help become better leaders. Mid-management level training incorporates Echelon Front Online courses by Jocko Willink, focusing on accountability, prioritization, decisiveness and planning. The operations team training program focuses on job execution. Finally, the company library provides employees access to digital and audiobooks to support self-development.

Cherry Coatings recruits to fill immediate positions and needs for the future. “Culture is so important to our company,” Drain says. “When a candidate meets with us and he or she fits our culture, we go ahead with them.” 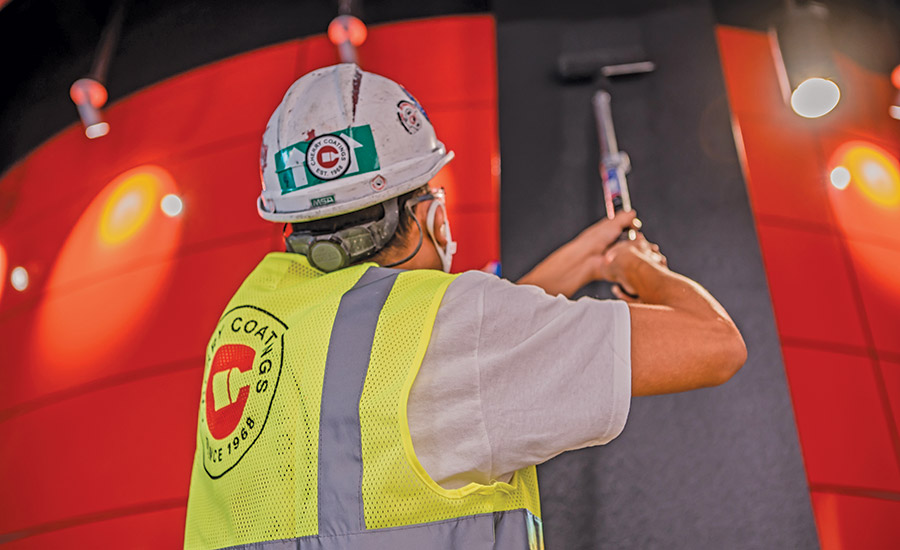 The $385-million Kalahari Resort & Hotel opened at full capacity the first week of November 2020. On 119 acres, the largest indoor water park in the U.S. has an indoor lake and river and a water slide to the outside, seven restaurants and an 11-story hotel tower with 1,000 rooms.

“Cultivate is one of our core values, so we emphasize developing not only yourself but others.”
—Zack Cherry, President, Cherry Coatings

Cherry Coatings had to find a coating system that would be durable enough to maintain the required 10-year warranty. “The owner had had some adhesion issues with steel substrates at water parks because of the highly chlorinated environment,” says Josh Langwell, vice president of operations and project manager for Cherry. Langwell and his team worked with Sherwin-Williams, which offered recommendations, mock-ups and tested for the best high-performance coating system. They selected Macropoxy 646 Fast Cure Epoxy prime coat and Sher-Loxane® 800 top coat. The team applied a total of 8,000 gallons of both coatings, Langwell says.

A second challenge was ensuring that a large order of 10,000 gallons of wall paint reached each of the floors before the buck hoist came down, which occurred early in the project schedule. “We made sure over the course of two weeks that we ordered the space for the hoist,” Langwell explains, noting that this avoided relying on the already heavily used freight elevator.

Finally, the owner and general contractor Hensel-Phelps wanted a barrel vault ceiling at the entrance to the water park to have a watery effect, but weren’t sure how to accomplish this. The initial design was a wallpaper that looked like water, but it didn’t achieve what the design team was looking for: the effect of moving, shimmering water.

“After four or five different wallpaper selections by the design team that they didn’t like, I suggested the glitter glaze finish that we had installed at the WinStar World Casino and Resort in Oklahoma,” Langwell says. Kalahari Resort & Hotel (above), the country’s largest indoor water park, opened in November 2020 at Round Rock, Texas. Cherry Coatings completed the interior and exterior painting on the Kalahari, the largest project in the firm’s history. Work also included a glitterflake finish that gives the barrel vault entrance a watery effect (below). He worked with the design team to find the right size and color of glitter flake to spray on the ceiling. “We performed mock-ups with the Kalahari design team to achieve the desired effect,” he adds. The glitter chips came from Chips Unlimited, and Cherry Coatings made the glaze.

“We installed the glitter glaze and they loved it,” he says, adding that the design team noted they would like this effect at future locations.

“Cherry is good about getting solutions and looks at all possible options on how products perform in certain environments and the pros and cons of all of them,” says Edward L. Kowalski, superintendent with Greeley, Colo.-based Hensel Phelps. “They’re top notch.”

At Globe Life Field, the company was one of two painting contractors, working with Manhattan Construction Co. on an approximately $4-million contract.
“I was excited to see us working on the locker rooms, weight room and dugout because it reminded me of playing back in the day,” says Rocky, who pitched for a short time with the Baltimore Orioles and Chicago Cubs.

“The Cherry team were true team players. They continually focused on the quality of their work and took pride in delivering a high-caliber finish, whether it was their painting crews or wallcovering. They were always willing to help out and do what was needed for the project,” says Brett Marshall, senior project manager for the Oklahoma City-based general contractor. “It is this type of commitment, dedication and attention to detail that make projects such as the ballpark a success.”

Leonardo Electronics US to Build Semiconductor Manufacturing Facility Near Tucson

Manhattan Construction Is a Family of Builders