This website requires certain cookies to work and uses other cookies to help you have the best experience. By visiting this website, certain cookies have already been set, which you may delete and block. By closing this message or continuing to use our site, you agree to the use of cookies. Visit our updated privacy and cookie policy to learn more.
Home » Podium-Style Tower Seen as a Rising Trend in Tempe
SouthwestSouthwest Construction Projects
Digging Deeper | Mixed-Use

Podium-Style Tower Seen as a Rising Trend in Tempe

Builders of the city’s new 100 Mill mixed-use project have also preserved a historic adobe building on the site.

A “riddle” is how Brandon Dillingham, managing director for Houston-based real estate developer Hines, describes 100 Mill, the 17-story, mixed-use tower his company and Cousins Properties are integrating into a 2.5-acre parcel in Tempe, Ariz.

As a gateway site with a popular local park and lake to the north, an existing office building and a planned Hyatt hotel tower on the other side and a historic adobe building mere feet away from where the new high-rise is taking shape, Dillingham adds, “You need to be sure you get the components right.”

That riddle, or puzzle, is well on its way to being solved, with the 280,000-sq-ft cast-in-place building, designed by DAVIS Architects and constructed by Gilbane Building Co., set for substantial completion later this year. The $80-million podium-style structure, clad in curtain wall and contrasting metal panels, will feature nine 31,000-sq-ft office floors set atop eight above-grade parking levels. A transition level combines conference spaces with an outdoor roof deck that includes trellis-shaded seating areas and landscaping with trees and planters. 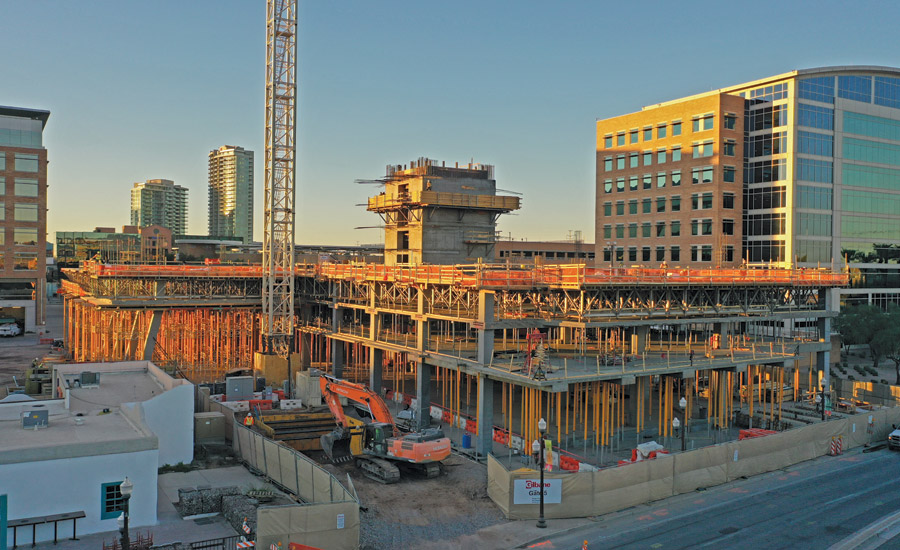 Because the owner had already cleared the site of utilities, Gilbane was able to get 100 Mill off to a fast start.
Photo courtesy of Gilbane Building Co.

The ground-floor lobby, which will feature high-end finishes punctuated by glass-fiber-reinforced concrete, will offer a fitness center and 7,500 sq ft of retail space.

“The site drove the design,” explains DAVIS design director Richard Drinkwater, who adds that the limited space precluded use of a separate parking structure, hence the podium-style design. The challenge became giving 100 Mill the massing of a single building “rather than a layer cake,” Drinkwater says.

By positioning the office levels toward the park, the resulting vertical north corner contrasts with the more horizontally wrapped backside, creating “a good composition that plays nicely design-wise,” he adds. 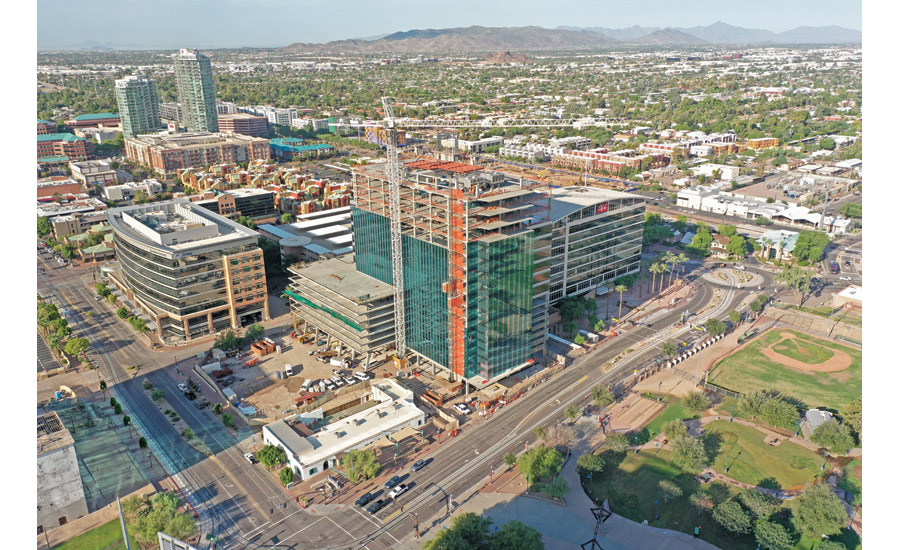 Located at the north end of Tempe’s downtown, 100 Mill provides a transition between the built environment and a popular city park.
Photo courtesy of Gilbane Building Co.

One common project conundrum Gilbane didn’t have to tackle was preparing the site for construction. With prospective tenants wanting to move quickly after identifying new space to lease, Hines devoted approximately eight months in advance of the February 2020 groundbreaking to clearing utilities and performing required archaeological surveys while the design came into focus.

“Along with getting a clean site to work with, we were also able to start the foundation-permitting process sooner,” says Gilbane project manager Joe Hare. “We were underway in just a couple of weeks.” 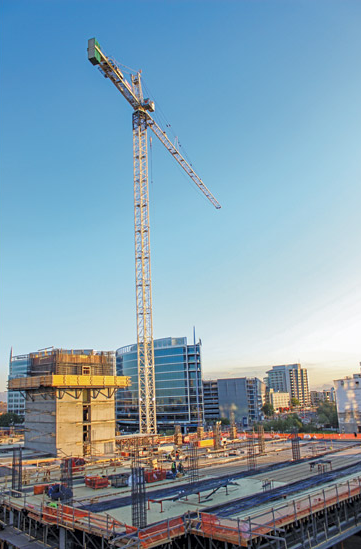 “Some pours started at midnight, so we were there just to make sure sleeves were positioned right.”
—Joe Hare, Project Manager, Gilbane Building Co.

As part of the structure’s post-tensioned concrete frame, a cantilevered portion of the above-ground parking levels on the east side is supported with seven angled, metal-clad, 24-in. by 32-in. concrete columns to create a 28-ft-high, 60-ft-wide paseo, making for a more pedestrian-friendly connection to the park with a nearby light-rail stop and developments to the south.

“The building comes down cleanly, but the paseo gives it a nice aesthetic ‘oomph,’” Drinkwater says.

On the office levels, 6.5-in.-thick slabs with banded beams provide a 45 ft span from the central core to the building’s perimeter columns. Spaced every 28 ft, the columns were left exposed and rounded as a design feature to complement the expansive windows that provide 100 Mill tenants with floor-to-ceiling views on all four sides. 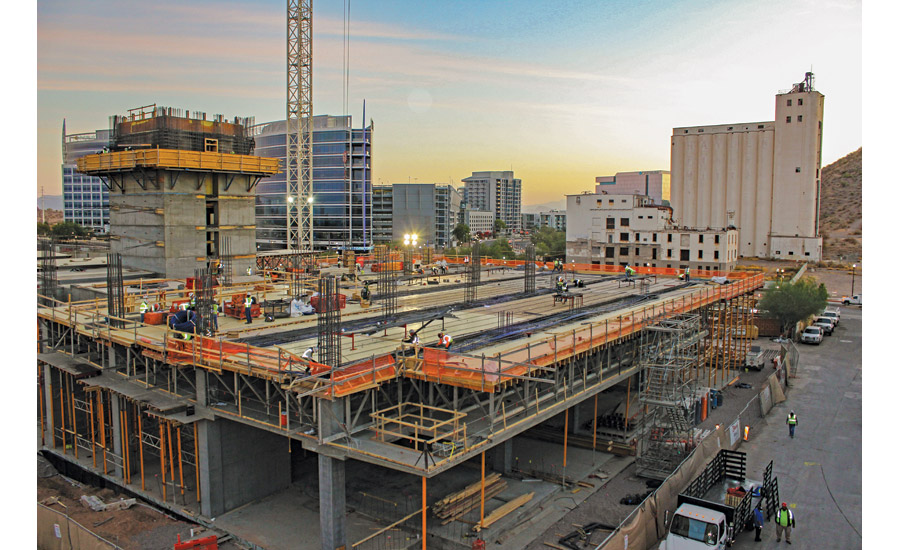 With so much concrete going into 100 Mill’s structure, Hare says coordinating the placement schedules was particularly important. Even with some major projects sidelined by the pandemic, the amount of continuing construction activity strained concrete supplies.

“Our sub, Suntec Concrete, was always able to staff the project and help us stay on schedule,” he says. “But if we weren’t ready when they were, the concrete would go someplace else, and we’d have to arrange a new delivery.”

Hare adds that the concrete crews “led the charge with efficiency” and close coordination kept problems to a minimum. 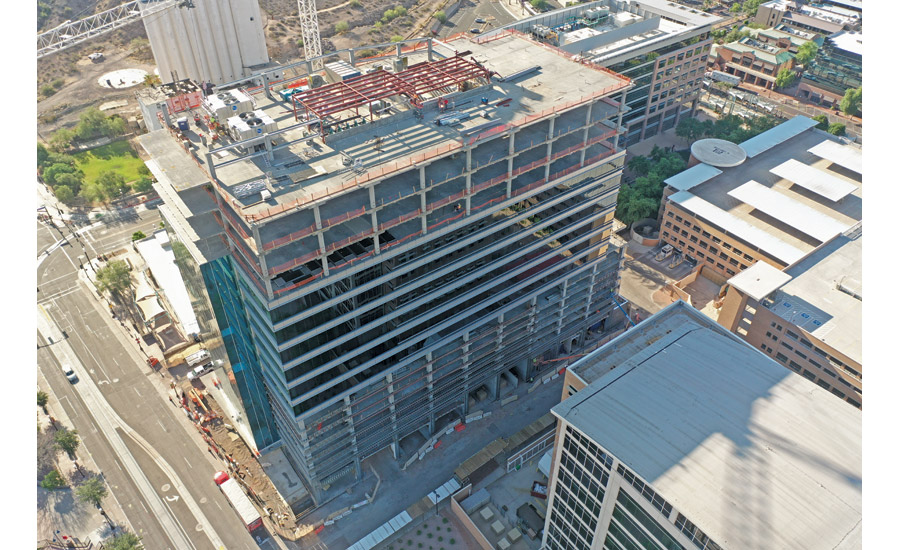 With developable sites at a premium in Tempe, 100 Mill could be the first of many podiumstyle structures in the city.
Photo courtesy of Gilbane Building Co.

“Some pours started at midnight, so we were there just to make sure sleeves were positioned right,” he says. “Otherwise, it was pretty routine.”

Still, the project team had to tread somewhat lightly given that Hayden House, Tempe’s oldest continuously occupied building, is part of the site. Built between 1871 and 1873, the adobe house initially served as the home of the city’s founder, Carl Trumbull Hayden, and later served for more than 60 years as a landmark restaurant. Enlisting the expertise of an adobe brick specialist, the project team renovated the building to its original condition, then donated it to the city for use as flex office space.

With only a driveway separating Hayden House from 100 Mill’s extensive foundation work, Gilbane installed cameras and vibration monitoring devices and performed weekly inspections for cracks during the renovation to ensure construction safeguards kept the historic building safe. Hare says that alerts generated by the sensitive system were usually the result of renovation work rather than anything going on next door.

The peaceful coexistence of old and new elements at the site has complemented a smooth construction process for 100 Mill, which marked its concrete structural topping out in June and was soon followed by the curtain wall and rooftop mechanical systems that will contribute to the building’s LEED Silver certification. Close behind has been the floor-by-floor interior core-and-shell work. 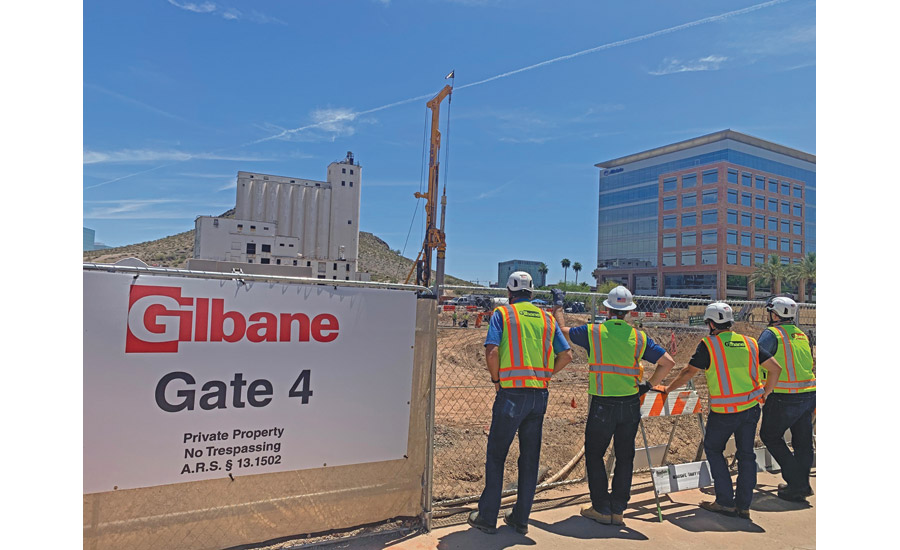 Despite getting underway in the midst of the pandemic, 100 Mill has experienced few COVID-related issues.
Photo courtesy of Gilbane Building Co.

“A big milestone was turnover of the first office floors—Levels 10, 11 and 12—in early August,” Hare says. “We’ve had a great team and good collaboration with owner and designer. Whenever there’s been an issue, it’s been addressed quickly and helped us gain time.”

The race to achieve substantial completion in December is good news for 100 Mill’s owners, who have leased approximately 80% of the building to a high-profile tenant list headed by Amazon and Deloitte US.

“Gilbane has done a good job managing the project through the pandemic and helping us meet our commitment to tenants,” Dillingham says. He adds that incorporating elements of health, wellness and outdoor activities into 100 Mill has contributed to an already successful project.

“Tempe is already a very walkable city that is focused on activity, with a lot of that energy coming from the university,” he says. “We’ve compacted a lot into one spot, which helps reflect the direction we see the city going.”

Drinkwater sees 100 Mill as a harbinger for even bigger podium-style high-rises in the city. “Location limits what you can do, but we’re seeing these more difficult sites being filled with larger, more ambitious projects,” he says. “What was a rarity in the past is going to become more common.”