A team of U.S.-based design firms working with a bell foundry in France is taking collaboration to another level on this Tampa project

Few projects better epitomize architect Frank Lloyd Wright’s admonition that form and function “should be one, joined in a spiritual union” than the Susan and John Sykes Ars Sonora, one of the world’s largest and most unique musical bell sculptures, currently in the early stages of construction at the University of Tampa.

Set to rise from a plaza fountain adjacent to the Sykes Chapel and Center for Faith and Values, the 105-ft-tall marine-grade stainless steel tower will be adorned with 63 bronze bells precision crafted by the Paccard Bell Foundry in Annecy, France. The family-owned foundry, which has produced bells since 1796, created the Ars Sonora musical tower concept in 1999. The design includes electronic piano keyboard technology that will allow musicians to better control the speed, volume and dynamic range of the notes, with nuances that conventional bell towers cannot produce.

Upon its scheduled completion in 2022, the Ars Sonora will be the first such bell sculpture the U.S. and the largest in the world. University spokesman Eric Cardenas says the structure’s beauty and music will complement “a carefully planned gathering place with benches, shade trees and grassy areas that will offer the university community and Tampa community a multipurpose space for inspiration, reflection and entertainment.”

Given the many design intricacies associated with planning and creating such a singular structure, it’s hardly surprising that the project has been in development for nearly two decades. The concept, part of the 15,000-sq-ft chapel that opened in 2010, has involved a lengthy transatlantic collaboration between Paccard and Atlanta-based TVS Design that intensified when the university formally placed its order for the Ars Sonora in 2018.

TVS associate principal and project manager Ian Hunter says “a lot of back and forth” has been necessary over the years to shape participants’ differing design visions and requirements “into something that will be a true focal point for the plaza.” He adds that TVS’s long experience with international projects “made us experts in coordinating schedules across multiple time zones and conducting video conferences long before the pandemic.”

Not surprisingly, sound is at the core of the Ars Sonora, influencing everything from the tower’s shape and location in relation to other nearby structures to the extensive electrical system. Developed with electrical engineering consultant EXP, the network’s six miles of wiring connects the bells’ dynamic strikers as well as four swinging bell motors and nearly 150 lights. 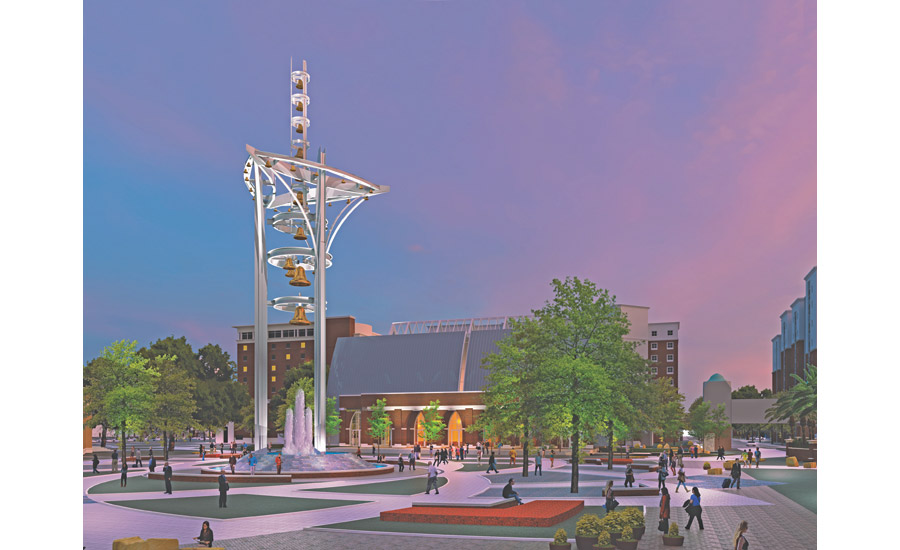 The Ars Sonora will complement what project officials say will be “a carefully planned gathering place” for university students and the community.
Rendering Courtesy of The University of Tampa

Because the Ars Sonora can be played from either inside the Sykes Chapel or in the plaza, the rate at which sound travels necessitates understanding exact distances between the tower and keyboardist.

“Everything has to be incredibly precise from the electrical perspective so that the timing is exactly right,” Hunter says. “We’re talking a difference of milliseconds that has to be analyzed and tested to be sure that accuracy is there.”

Equally critical was the tower’s design, which incorporates the curves of the Sykes Chapel’s iconography with a structural robustness that will support bells ranging in size from 20 lb to 4,635 lb and withstand winds of up to 160 mph in the hurricane-prone region. TVS worked with consultant Walter P Moore to incorporate these factors into the structural design, including a foundation system that includes a 4-ft-thick underground pile cap supported by 18 piers extending up to 80 ft deep.

Even the tower’s placement within the plaza proved to be an exercise in precision. Hunter explains that a narrow vertical window on the chapel’s south side allows a view through the interior to the plaza.

“We wanted the Ars Sonora to be perfectly centered in that window and align with an adjacent academic building,” he says. “That required a lot of field work and verification because you couldn’t just rely on as-built conditions.”

Scott Gossen, the university’s director of design and construction, says the Ars Sonora’s surge protection and light fixtures illustrate the level of collaboration necessary to ensure the French-built structural systems comply with U.S. building codes. With no Underwriter’s Laboratory (UL) listings in Europe, the team had to source these elements domestically and air freight them to France for testing.

“It’s difficult to think of a nut or bolt that hasn’t been the topic of a discussion with our design-build team.”
—Scott Gossen, Director of Design and Construction, University of Tampa

“We went through five or six surge protection devices before we found one that met the design parameters and did not impact the signal that will play the bells,” Gossen says.

The structure’s intricacies complement the foundry’s meticulous fabrication of the bells. Anne Paccard, the foundry’s general manager and part of its eighth generation of family ownership, says the process is based on hand-crafted molding and high-quality casting that, for the largest bells, can take as long as three months to complete.

“Paccard bells are known as the Stradivarius of bells due to our mastery of the process,” she says. “Each bell is precisely tuned in order to match any philharmonic musical instrument.”

Following fabrication and initial testing at the foundry, the bells were shipped to Chambéry, France, where steel manufacturer Satil is fabricating the support structure. The intense coordination effort has continued, Hunter says, with even seemingly minor facets such as the tower’s anchor bolts requiring extraordinary precision.

“This is not like a Lego set where you just deliver the pieces and start building,” he says.

After the bells are attached to the structure and retested, the Ars Sonora will be disassembled and shipped to Tampa for reassembly on campus, a process that Hunter says will take as long as necessary to ensure conformity with the structure’s exacting specifications. Construction manager Beck Group is currently working to integrate the Ars Sonora’s infrastructure and fountain plumbing into the plaza area’s existing underground utility network.

Even that part of the Ars Sonora’s journey has required extra attention because the specialized process was developed to French safety standards. Gossen says a peer review on all rigging and custom tools involved a rigorous process of adding labeling with maximum lifting capacities to satisfy U.S. requirements.
“It’s difficult to think of a nut or bolt that hasn’t been the topic of a discussion with our design-build team,” says Gossen.