OHLA USA Inc. increased its 2020 California revenue more than 70% from its 2019 total despite the pandemic

Since founding its Irvine, Calif., operation in 2013, OHLA USA Inc. has invested heavily in developing and training an experienced workforce. The investment has paid off in a big way during the COVID-19 pandemic, with the company reporting a large increase in revenue in the state. The company attributes the gain to its employees and new and continuing contracts.

As part of a global rebranding initiative announced earlier this month, the company, formerly known as OHL USA, changed its name to OHLA USA. OHLA’s stratospheric year-over-year growth is one reason ENR editors named the firm the 2021 Contractor of the Year for the regions that include Alaska, California, Hawaii, Oregon and Washington.

“Our success is largely attributed to our extensive network of talented, experienced people. We give them proper guidance, support and the tools they need to succeed and let them take control,” says Ashok Patel, CEO, OHLA North America. “In addition, our entry-level field staff lean on our more experienced project managers and exchange ideas and information that builds a firm foundation of trust and camaraderie.”

“This is basically a Caltrans project on steroids. I’ve seen more in four years on this project than I’ve seen in my entire 25-year career in construction.”
—Alex Medyn, Project Director, OHLA USA

This strategy created a recipe for success during the pandemic. OHLA USA increased its 2020 California revenue to $434 million, up 73% from 2019’s $251 million, thanks to an increase in new work awarded in 2019 and 2020 and ramping up work on the $1.4-billion design-build I-405 Improvement Project, says Tony Bagheri, executive vice president for the company’s West region.

“The California market is an engine of growth for OHLA USA in the United States market,” says Bagheri, who foresees continued growth for the remainder of this year and into next.

“These clients and others continue to issue steady work, keeping our team busy at all times,” Bagheri says. 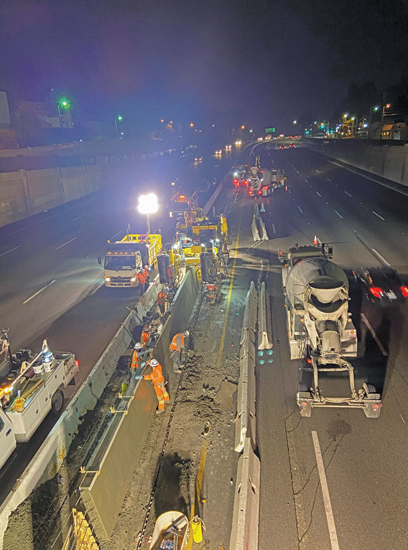 OHLA is replacing 17 miles of concrete barriers along the 101 Freeway in Los Angeles County.
Photos courtesy of OHLA USA Inc.

Headquartered in College Point, N.Y., OHLA USA is a subsidiary of OHL Group, a global infrastructure group with more than 100 years of history. The company has approximately 900 employees in California. OHLA USA specializes in heavy civil projects, including highway, rail and transit, marine, tunneling and hydraulic work.

Projects that helped OHLA boost its 2020 revenue include the Patsaouras Busway Plaza Station near Los Angeles’ Union Station, the Argo Drain Sub-Basin Water Infiltration facility near Los Angeles International Airport and the $35-million US-101 median barrier replacement between Hollywood and Calabasas along the 101 Freeway in Los Angeles County.

But OHLA’s most impressive current project is on California’s notoriously busy I-405 freeway between Costa Mesa and Los Angeles County. Scheduled for completion in 2023, the project is led by OC405 Partners, a joint venture comprised of OHLA USA and Astaldi Construction.

The job calls for fast-tracked design and construction of 16 miles of two new lanes of traffic in each direction. Along the route, crews will build, widen and replace 36 bridges, erect 160 retaining walls and place 300,000 cu yd of concrete pavement and nearly 300,000 lb of asphalt to widen the freeway.

“This is basically a Caltrans project on steroids,” says Alex Medyn, OHLA project director. “I’ve seen more in four years on this project than I’ve seen in my entire 25-year career in construction.”

Medyn, who spends about eight hours a day coordinating and scheduling meetings on the project, says managing traffic is the biggest challenge on the job.

“We have over 450,000 cars that go through the corridor on a daily basis, and we are very limited in space, so we have done a lot of staging and restaging in order to facilitate traffic during construction.”

Medyn says his team worked with local cities, Caltrans and OCTA to replace four project bridges in one stage, instead of two stages, to expedite construction.
“OHL is solution-oriented, and they have made some great suggestions on how we could modify some of the bridges on the project and save time and money and make it more beneficial to the [local] cities,” says Darrell E. Johnson, OCTA CEO. “OHL was a really great partner in bringing those kinds of ideas forward and doing it in a time frame that helped everyone, including us, the owners, the commuters and the local cities.”

“OHL was able to create a well-thoughtout and organized plan that allowed the entire system to be tested to the satisfaction of the client.”
—Robert Samonte, Los Angeles Dept. of Public Works, Bureau of Engineering

Johnson says replacing bridges in one stage as opposed to two stages saved about four to six months on the schedule for each bridge and about $3 million overall. The savings add up on a project that is placing between $25 million to $30 million of construction per month and has upward of 1,000 people per day on the jobsite.

Meanwhile, OHLA USA is the general contractor on the 101 freeway project, which began last year and is scheduled to finish in December 2022. Currently 30% complete, the work removes and replaces 17 miles of concrete barriers in six stages, with all work being done at night.

The 101 jobsite is tight and narrow. “[OHLA USA] proposed reducing some of the working area to have better constructibility and more room to work in the area, and work could proceed more smoothly and quickly. At the same time, it reduced the project cost,” says Venkataraman. “It saved the project about $3 million and approximately 22 days.”

The treatment system consists of a 10-million-gallon bottomless reservoir infiltration tank containing a network of ancillary infiltration wells and a connecting pump station. The 250-ft-dia concrete tank was constructed using cut-and-cover techniques. It allows treated water to seep through into the soil and replenish the natural underground water system.

Diana Gonzalez, OHLA USA project manager, says since this was the first open-bottom prestressed tank built in a private property, L.A. Dept. of Building and Safety (LADBS) was stringent in reviewing every design item and provided the steps required for the inspection and permit to be fulfilled.

“This took many meetings and conversations between the designers and the head of the LADBS,” Gonzalez says. “Inspections were set between deputy inspectors, LADBS inspectors, shop inspectors, BCA and the designer inspection team.”

During construction, the team coordinated trades, site access, safety and quality inspections while adhering to the requirements set by Los Angeles World Airports, which limited trucking hours, trucking types and noise, among other restrictions.

“Once the design intent of the project was set and the process explained, the construction team was able to move forward with an action plan that allowed for clear and concise scheduling and coordinating with trades and agencies,” says Gonzalez, noting the firm’s extensive interagency coordination.

Robert Samonte with L.A. Dept. of Public Works’ Bureau of Engineering, says Argo Pump Station commissioning required simulating realistic storm conditions, which was “difficult to accomplish without an actual storm. OHL was able to create a well-thought-out and organized plan that allowed the entire system to be tested to the satisfaction of the client.” 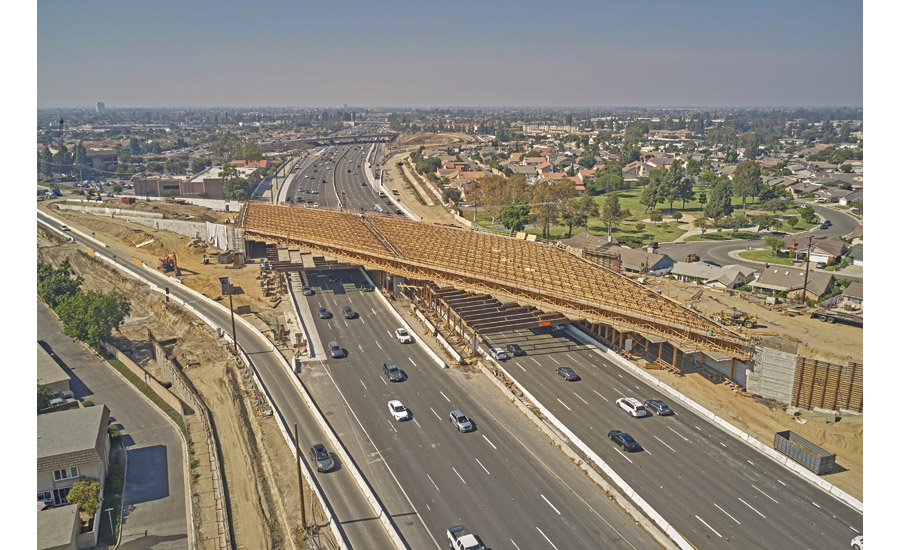 OHLA is building, widening or replacing 36 bridges on the $1.5-billion I-405 project.
Photos courtesy of OHLA USA Inc.

As OHLA USA looks to the future, Bagheri says the company will continue to “bid selectively and strategically in its core competency work—highways, bridges, transit, water, pipelines, etc. As a major heavy civil contractor, we expect infrastructure and public works projects to continue to be the main source of our revenues.”

In California, highway and rail transportation projects are some of the company’s leading sectors, he says. “Agencies like L.A. Metro are expected to issue new work, including light rail projects,” adds Bagheri. “Also, we expect a large amount of highway work to improve traffic flow on several corridors throughout the state.”

He says OHLA is looking at project opportunities in areas outside Los Angeles and Irvine, such as San Diego, San Jose and Sacramento, but does not have immediate plans to enter the Pacific Northwest market.

“The work in California keeps us busy, and entering a new geography would require us to set up an office similar to what we did in California in 2013. We would have to hire a new core team,” says Bagheri.