This website requires certain cookies to work and uses other cookies to help you have the best experience. By visiting this website, certain cookies have already been set, which you may delete and block. By closing this message or continuing to use our site, you agree to the use of cookies. Visit our updated privacy and cookie policy to learn more.
Home » Gilbane's Diversity Commitment Builds Growth
New YorkNew York Construction Companies
New York 2021 Contractor of the Year

Gilbane Building Co. views its efforts to seek out and support minority, women-owned and disadvantaged firms for its projects as more than just meeting mandates. The global construction management company, now a $6.5-billion firm with more than 45 offices worldwide, once dealt with similar challenges as a tiny carpentry startup founded in 1870 in Providence, R.I., by two brothers whose family fled Ireland’s Potato Famine 25 years before.

That legacy lives on 150 years later as Gilbane continues to promote diversity among the contractors and subcontractors it manages. Despite the pandemic, the company’s New York regional revenue reached $1.56 billion in 2020, up from $1.49 billion a year earlier, and with its aggressive subcontracting efforts, project innovations and strong community connections, ENR editors have named it the region’s 2021 Contractor of the Year.

Privately held and still family owned, Gilbane’s services range from preconstruction planning and consulting to general contracting and facility management. It employs 3,000 worldwide, with more than 530 in New York and New Jersey. Despite its size, the firm has resisted the complacency and stagnation that can accompany such large-scale success.

“We’re a big company, but we’re nimble and agile and able to make our own decisions,” says Grant Gagnier Jr., senior vice president leading the New York City business unit. “That allows us to experiment.”

Even in the sprawling field of construction management, Gilbane stands out with the breadth of its expertise and services. The company works in every major market sector in public, residential and commercial development, including high-rise towers, hospitals, schools, museums and community centers. With business units in New York City, upstate New York and New Jersey, it has 14.7 million sq ft of regional work underway. 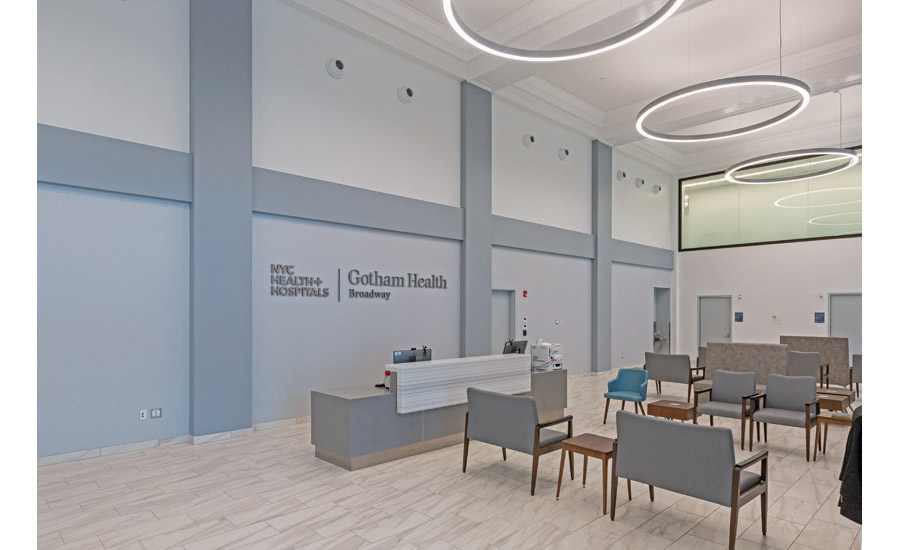 Gilbane has also challenged itself with a new 20% goal for small and diverse company partners on its projects. This lofty aim requires constant planning and creativity, says Gagnier, pointing to the firm’s Rising Contractors program that was recently developed to recruit and train a diverse pipeline of small companies. “It adds a level of complexity to what we do, but we have an obligation,” he says. “If we don’t, we won’t be relevant.”

The annual program offers small businesses a classroom curriculum to broaden their industry skills and knowledge as well as insight into working with Gilbane. The spring 2021 instruction is being held virtually due to the pandemic, with nearly 70 firms participating. For one recent course, Gilbane managers fielded 300 applicants for 16 spots.

“The program teaches basic business acumen to smaller contractors,” Gagnier says. “We go over the rules of the road, requirements for payments, work orders, finances—the skills a firm needs to achieve basic growth.”

Gilbane’s efforts reflect a real shift in the industry for both construction management firms and their clients, says Brennan Gilbane Koch, director of client relations and strategy and a fifth-generation Gilbane family member.

“Diversity used to be something we added to the agenda of what we talked about with clients,” she says. “Now it is the first agenda item they are putting on.” 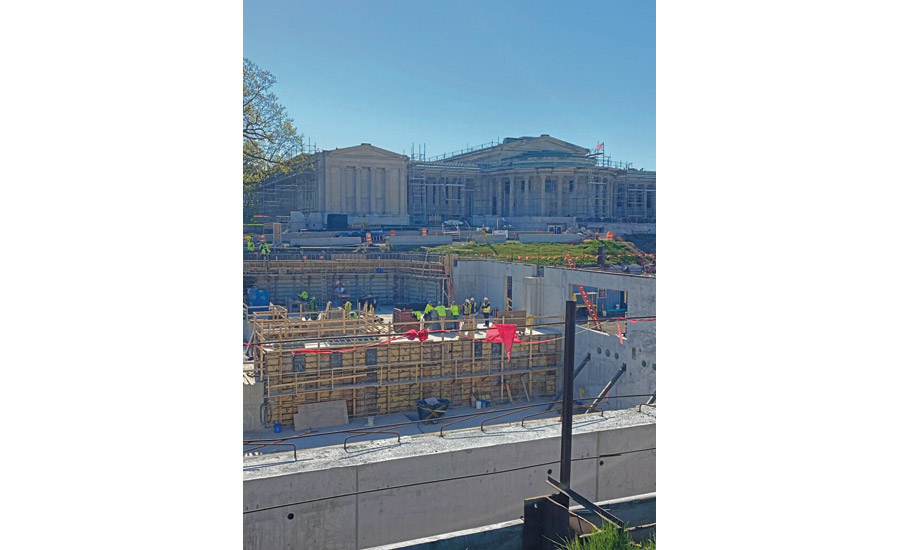 Trained as an architect, Awoonor founded Skyline 14 years ago and has mentored a number of other small businesses. Like Gagnier, he quickly discovered that these firms had the technical know-how but often lacked administrative or regulatory expertise.

“Gilbane really wanted M/WBE firms on its projects,” he says. “We needed more time to bid, so project managers extended bid dates. They make every effort to ensure we get paid in a reasonable time, which is extremely helpful to my subs to maintain our schedule.”

Such efforts have paid off, with about 60% of firms working on the $12-million library project certified minority or women-owned, Awoonor says.
Working on such large projects is vital to these firms’ growth. “If you do little contracts, you can’t really grow,” he says. “You need bigger contracts, bigger credit lines. But bigger contracts have bigger risk, bigger outlays. We had this mechanical guy who needed equipment, but the manufacturer wanted money up front. Gilbane made accommodations and was helpful and understanding.”

Skyline is prime contractor on the net-zero library and has met every challenge. The 10,000-sq-ft building’s design requires 1-in.-thick stainless steel with a glass bead finish cut into intricate shapes. “Not many companies can handle those specifications due to the weight and size,” Awoonor says. Skyline and Gilbane worked together to find a contractor in Pennsylvania and acquire two shipping containers of steel, a logistical challenge during the pandemic. 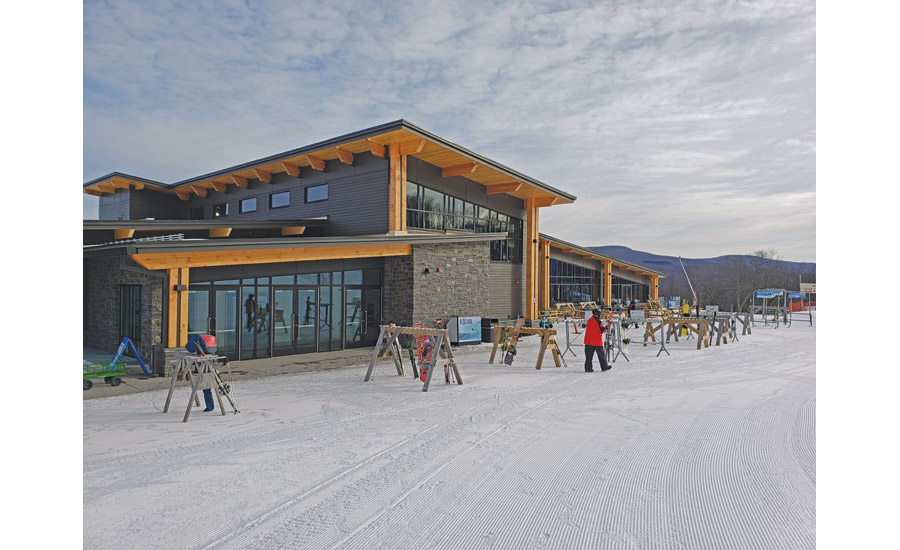 One of Gilbane’s most high-profile design-build projects is the restoration and rebuilding of Winter Olympic facilities in Lake Placid, N.Y.
Photo courtesy Gilbane Building Co.

In New Jersey, Dan Shea, vice president and business unit leader for the state, is also actively recruiting and training M/WBE businesses to join Gilbane projects. He oversees about 70 people in Newark and is building projects across New Jersey, ranging from civic projects to residential towers to life sciences labs.

Shea’s office has five contractors enrolled in its Rising Contractor program. “We do many smaller projects that these businesses can get involved in,” he says. “If they can’t get involved with a Gilbane project directly, we have connections with subcontractors. If there’s a dormitory project with 300 bathrooms, we can ensure a local company does the fixtures.”

Gilbane’s John LaRow, vice president and leader of the upstate New York unit, has seen high demand for such training. His office saw 700 applications for a pre-apprenticeship program in Syracuse to bring in minority and women-owned businesses.

“We’ve worked in a lot of municipalities like Syracuse, Rochester and Buffalo. They wanted a local workforce,” says LaRow, who helped launch a grassroots effort to move into those communities.

LaRow also manages about 70 employees in his business unit, which touts a steady base of $5-million to $100-million projects as well as “whale opportunities,” he says, larger projects that include a $450-million, 700,000-sq-ft replacement hospital in downtown Utica. Part of the Mohawk Valley Health System, the 375-bed hospital project will contract more than $100 million of work to small and minority businesses.

In Buffalo, Gilbane played a crucial role in redeveloping huge, long-vacant manufacturing facilities on the east side of town. The contractor, state and city set local hiring goals of 25% and women and minority business subcontracting goals of 30% for one such project. The team has just completed the second phase of the 250,000-sq-ft total redevelopment that includes a workforce training center, restaurants and manufacturing. 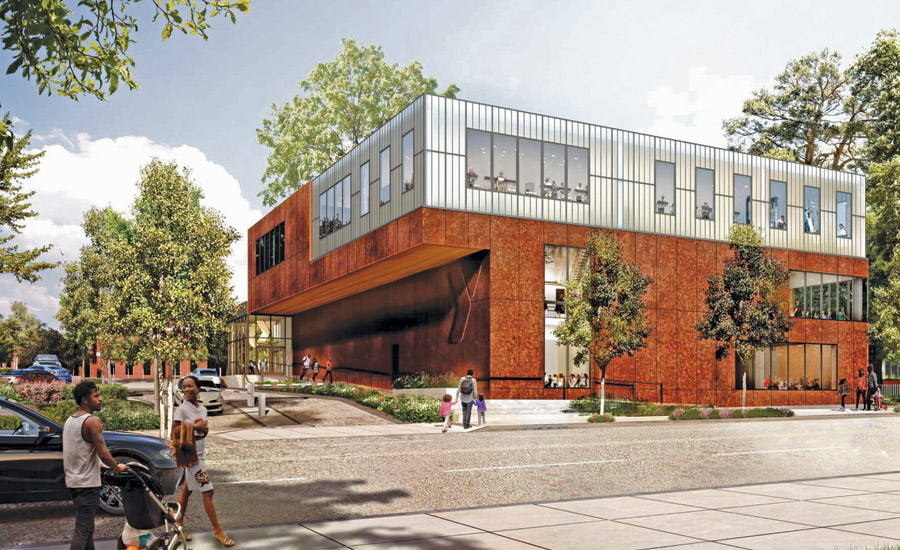 Regardless of project size, Gilbane’s innovation and expertise in design-build construction stands out in New York and New Jersey. The key, Shea says, is to include a design-build professional on its preconstruction staff who can manage multiple disciplines to make sure everyone is going in the same direction.
Perhaps Gilbane’s most high-profile design-build project is the restoration and rebuilding of the Winter Olympic facilities in Lake Placid, says LaRow. The firm helped build the original facilities 40 years ago, and its work with the Olympic Redevelopment Authority is based on that experience, he says.

Sharon Greenberger, president and CEO of the YMCA in New York City, has reached out to Gilbane throughout her career. In a previous position in 2012, she asked the firm to renovate the Columbia Presbyterian Hospital emergency room. The complicated $90-million project required the team to work on the emergency room facilities while in use serving patients.

“They approached it with extraordinary precision and imagination and sensitivity,” Greenberger says. The firm has “an extraordinary sense of ownership about the work that they do. They immerse themselves to understand what the priorities are, what the working conditions are, what the cultural norms are. They have a sixth sense, an ability to understand what will work for everybody.”

Greenberger and YMCA are building two branches in the Bronx, including  the $60-million Northeast Bronx facility. “Their team has stayed with us for three years, through a harsh winter, then COVID, now post pandemic. They’ve done an extraordinary job staying on time and on budget.”

Gilbane was only a few months from completing the Northeast Bronx facility when the city asked to use it earlier this year for COVID-19 vaccinations. Gilbane developed a strategy to expedite completion of the gymnasium, locker rooms and parking lots for vaccination use. To contain these areas, the team installed temporary walls of Sheetrock and a temporary flooring system to protect the just-finished gymnasium floor. Gilbane’s team not only completed the gym in two weeks to enable this use, it sped up work in other areas and kept the whole project on schedule. “That is their superpower,” Greenberger says. “They are problem solvers. The whole team from the top down will find a way to say yes.”

Gilbane Builds On Its Family Culture