Navigating noise issues, congestion and even the religious concerns of three Jewish congregations in the area, construction crews are performing surgery on a major artery in metro Atlanta in the second-largest project ever for the Georgia Dept. of Transportation (GDOT). The $800-million Transform 285/400 project is also the agency’s second design-build-finance (DBF) project.

The developer, North Perimeter Contractors (NPC), a subsidiary of Ferrovial Construction, is building 32 bridges, 16 noise barriers, a diverging-diamond interchange and new collector-distributor lanes, among other components, to reduce traffic congestion and enhance safety in the area near the Interstate 285/State Route 400 interchange. The improvements will facilitate better east-west travel along I-285 and north-south travel along SR 400 by improving 4.3 miles of I-285 from west of Roswell Road to east of Ashford Dunwoody Road and 6.2 miles along SR 400 from the Glenridge Connector to Spalding Drive.

Currently the corridor handles about 400,000 daily vehicles. “It is a high-density, urban project with limited right-of-way and with limited lane closures allowed under the contract,” says Frank Maines, construction services director with Ferrovial. “Choreographing the work to meet deadlines while minimizing the impact to the traveling public requires tremendous coordination and planning.” 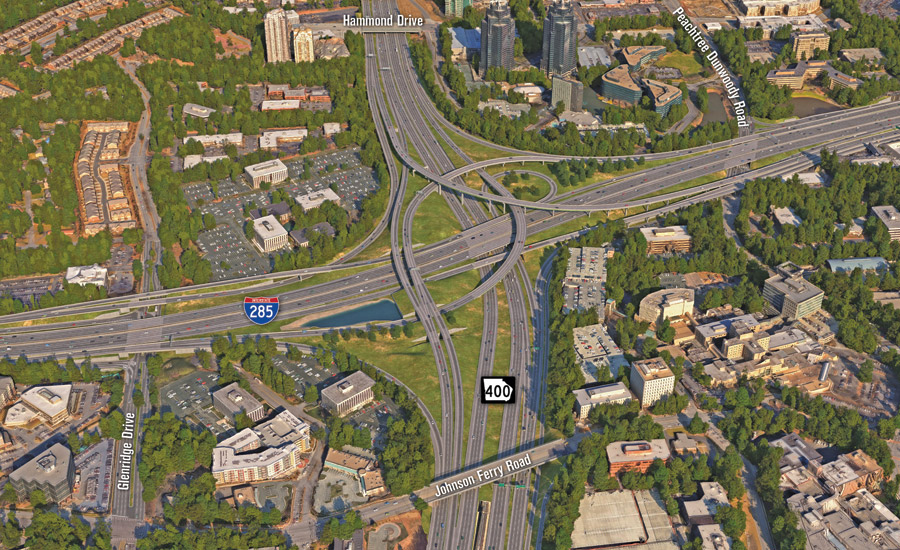 VISIONARY: Rendering shows a model of the Transform 285/400 project, part of a larger vision for mobility in Atlanta.
Rendering courtesy of GDOT

The project is the innovative offspring of two originally planned stand-alone projects—revive285, which aimed to improve the I-285/SR 400 interchange, and the SR 400 Collector-Distributor (CD) lanes project, which aimed to build CD lanes along SR 400, north of the I-285/SR 400 interchange, says Marlo Clowers, GDOT P3 project manager and principal in charge for the Transform 285/400 Project.

“‘revive285’ was a comprehensive Environmental Impact Statement [EIS] along I-285 North from I-75 to I-85, which included express lanes and transit with operational improvements,” she recalls. “The revive285 EIS was in progress and had completed extensive environmental and traffic analyses. The SR 400 collector-distributor lanes project had an environmental assessment (EA) that was approved in the 1990s, and the majority of right-of-way was already acquired.”

Initiated in 2014, the new combined project received gubernatorial support. “The highest level of state government wanted to implement it as soon as possible,” she says. “GDOT determined that the most efficient way was through a design-build-finance type of public-private partnership.” 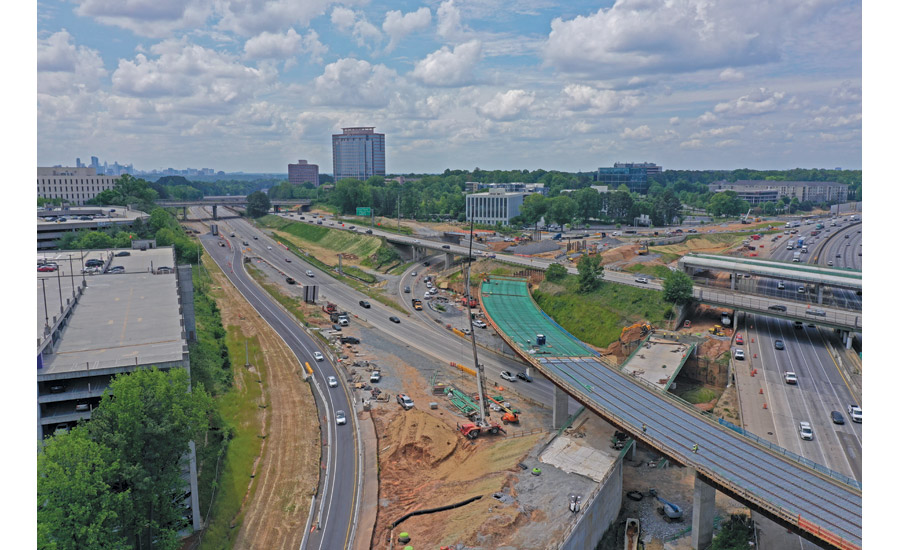 DECKED OUT: Deck operations are underway on new I-285 eastbound to the SR 400 northbound ramp.
Photo courtesy of NPC

GDOT issued a request for qualifications in January 2015, receiving four responses. NPC was ultimately selected as the winning proposer based on best value, and it began construction in 2017.

Technically, the State Road and Tollway Authority (SRTA) holds the contract with NPC, with GDOT acting as project manager for SRTA. GDOT issues certificates to NPC as construction progresses, and NPC submits the certificates to SRTA for payment, says Joaquin Losada, CEO of NPC.

The DBF contract ends in mid-2022, when construction is anticipated to be completed. 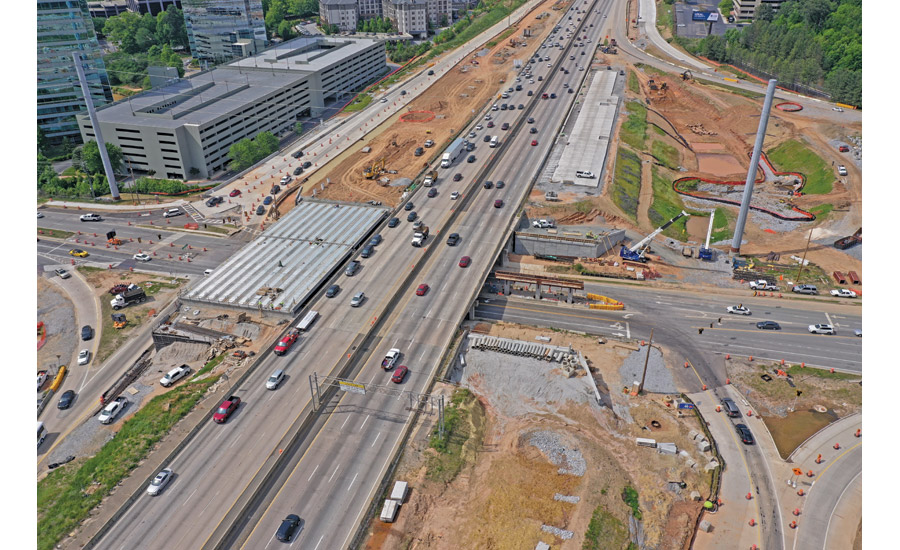 DIAMOND IN THE ROUGH: The junction of SR 400 at Abernathy Road will be a diverging diamond interchange.
Photo courtesy of NPC

“The project sits in a unique position,” says Clowers. “There are three Jewish synagogues. One of our commitments is to coordinate with them to ensure that [we maintain] the ‘eruvin’ boundaries around them that allow the congregation to move around.” The boundaries enable observant Jews to travel on Shabbat or a Jewish holiday.

“The construction team has been incredibly responsive and supportive,” says Joshua Heller, senior rabbi for the Congregation B’nai Torah. “The concept of an eruv is that for the sabbath, there is a continuous barrier that encloses the member of the community.  Georgia DOT worked with us to make sure that we could reroute that barrier even as utility poles and fences came and went.” 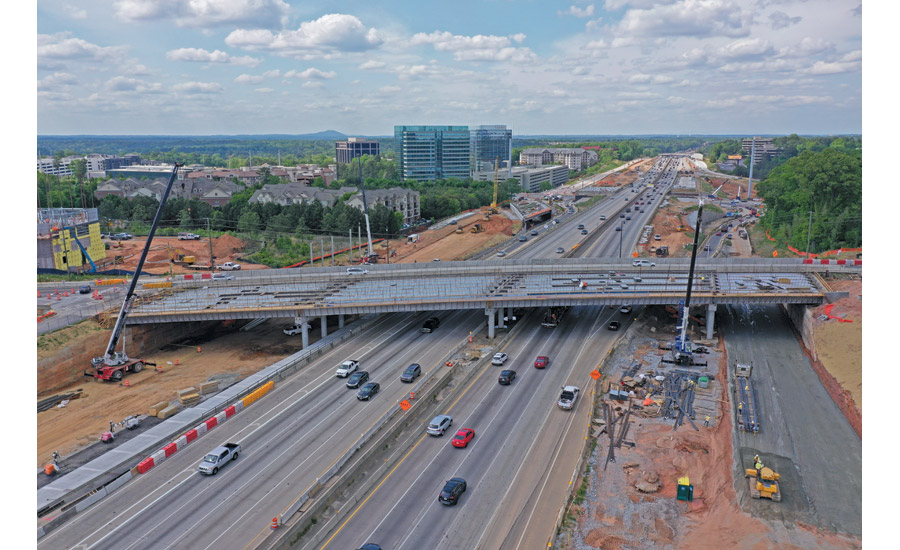 BIG BRIDGING: The bridge over Mount Vernon Highway is one of 32 on the project.
Photo courtesy of NPC

Crews must also work around three hospitals, large businesses and a significant residential area. The highway corridor also is situated in an area with a large cycling and pedestrian population, adds Clowers. GDOT and NPC added a plan to construct cycling/pedestrian paths in the project’s southeast quadrant. The path will run from Johnson Ferry Road to Peachtress Dunwoody Road, which ties into portions of  the Path400 project to the south, a planned 5.2-mile greenway.

NPC must also navigate 77 bodies of water and wetlands, 23 historic sites and various endangered species, notes Maines. “We also have migratory birds and the Chattahoochee crayfish to protect.”

The team is also building 16 sound barriers, one as high as 30 ft and 5,200 ft long to address noise concerns. “Residents supported an operational improvement because they knew it took extreme amounts of time to travel, but expressed concerns about noise,” Clowers says of the neighborhood reaction at the beginning of the project. The barriers are designed to be context-sensitive and “as aesthetically pleasing as possible,” she adds. “Early on, we met with local governments and the Perimeter Community Improvement Districts to decide on sound barrier designs.”

The sound barrier panels are made of concrete with an ashlar finish and are a light gull-gray color, as are the wall panels for mechanically stabilized earth walls.

In all, there are 8.5 miles of sound barrier with over 1 million sq ft of precast concrete panels. Also included are 154 retaining walls, 108,000 linear ft of storm drain pipe, 42 lane-miles and 2 million cu yd of excavation.

NPC and Ferrovial’s local office currently has about 400 employees, with 90% being local hires. According to NPC, more than 170 Georgia-based companies are working on the project. NPC exceeded GDOT’s Disadvantaged Business Enterprise goal of 17%; it is now over 19%. There are 85 DBE consultants and contractors and 108 job-training graduates.

NPC made several design refinements to streamline construction and improve preparation for future express lanes, says Maines. “The original design called for five levels of bridge decks; the [re]design reduced that to four.” In another modification, the team also is replacing three existing bridges; they are over Glenridge Drive, SR 400 and Peachtree Dunwoody Road, Maines adds.

Construction is more than 70% complete. Despite unprecedented rainfall and the pandemic, NPC is still on schedule for a May 2022 final acceptance.
“Travel time reduction will be greatly improved, and traffic congestion will be reduced with this project,” says Ann Hanlon, executive director  of Perimeteer Community Improvement Districts.

“Previous handling capacity [of the interchange] was 100,0000 [vehicles], and proposed handling capacity will be approximately 400,000. Improvements are going to greatly improve access entering and exiting the Perimeter Business Community,” she says.