The $1.2-billion contract to build a separate addition to Seattle’s Washington State Convention Center has required crews to work under an active downtown street, build components while hanging over sidewalks and the freeway, create fresh approaches to bringing natural light into the building and employ a billboarding construction method to keep everything on schedule.

The addition, being constructed by a joint venture of Clark Construction and Lease Crutcher Lewis, is going up one block from the current convention center— with a portion of the structure cantilevered over Interstate 5. Work began in summer of 2018, and the project team is targeting a summer 2022 completion.

“We have a complex project going on,” says Matt Griffin, a former ENR newsmaker (ENR 7/16/06) and managing partner of Pine Street Group, the development manager for the convention center, which is in a public facilities district. “A 7.7-acre site in the center of downtown is not easy to find. It is very complicated to build it.” 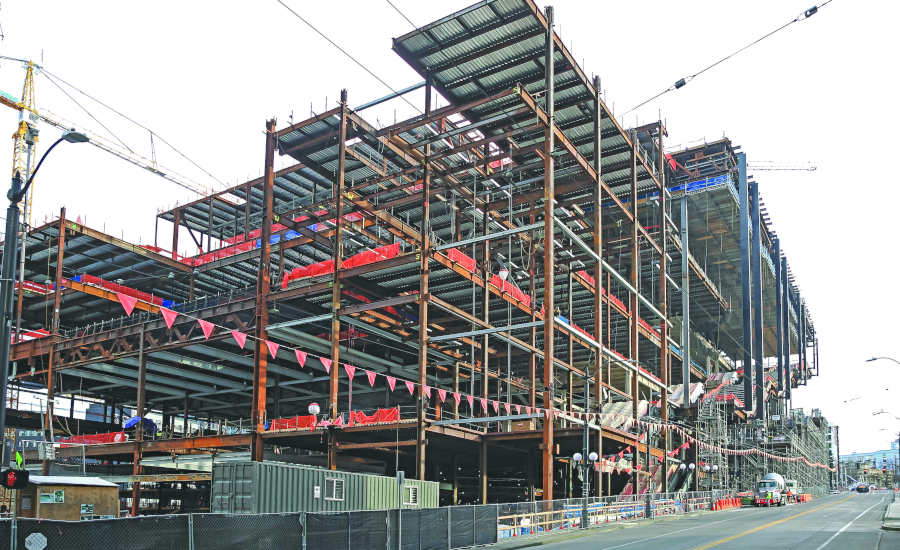 WESTWARD EXPANSION: The steel erection was done east to west.

“It is a progression instead of starting low and building up. We start at one elevation and work across the job to full height.”
—Ben Eitan, Vice President, Clark Construction

The 1.25-million-sq-ft building features three floors of underground parking, a 150,000-sq-ft exhibit hall on the lowest public floor, a fifth floor with a 100,000-sq-ft flex hall that can serve as a second exhibit hall and also includes outdoor terraces, 120,000 sq ft of meeting rooms on floors eight and nine, and a 60,000-sq-ft ballroom on the 10th floor. The new atrium pulls natural light down into the building, even to the lowest exhibit hall.

“The ballroom is striking to me,” says Ben Eitan, Clark Construction vice president. “Ballrooms are typi-cally on the ground [floor]. You see First Hill, Capitol Hill, beautiful views from the ballroom itself.”

An added feature of the building— designed by LMN Architects— is a “signature box” perched off the 10th-floor ballroom. The glassed-in room can be used as one large open space or divided up, each segment offering skyline views. The design calls for the west side of the building to step down gradually, out of respect for the historic buildings across the street. The outdoor terrace adds another key amenity to the convention center.

Magnusson Klemencic Associate, the structural engineer on the project, had to overcome the unique siting. “All I have done for the last 17 years is convention centers across the country and around the world and I have seen all shapes and sizes, but this center here is the most vertically stacked building I have ever seen in terms of how many program elements are stacked atop one another,” says Derek Beaman, MKA senior principal.

The biggest challenge came with the entire building sitting atop the exhibit hall with its 90-ft spans and then two floors of meeting rooms and a ballroom atop the 180-ft spans required in the flex hall. Placing significant loads and vibration sensitivity right in the middle of the building required the use of multi-story interstitial trusses. And not just one, but two.

One truss runs from the ballroom floor down through the two meeting room levels and below, a 65-ft-deep truss that includes multiple program levels. “It allows the building to be compressed vertically and allows it to be more efficient versus framing every floor on a floor-by-floor basis,” Beaman says.

At the lower level, a second interstitial truss extends through three levels of parking to span over the exhibit hall, supporting all the parking and the flex hall. “It is simultaneously making the building stiffer, higher performing and more efficient from weight and economy, while making it shorter instead of taller,” Beaman says.

While MKA has implemented similar solutions in the past, never before have they done it at this scale and stacked two on top of each other. To get the stacking to work, Beaman says it took immense coordination with the owner and the architect to site programming within the trusses for a noninvasive fit. 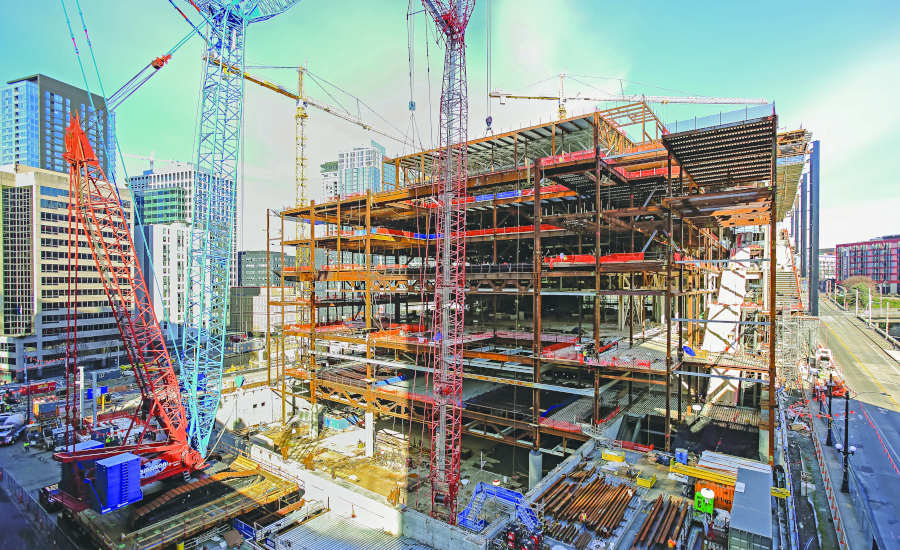 Rather than a traditional approach to constructing the entire building at one time, billboarding allows crews to divide the convention center into five zones, with crews working east to west, rather than from the bottom up. That means the first zones top out much sooner than the final zone, helping to speed up post-erection work. This is among the first billboarding projects in the Pacific Northwest on a major commercial building, Eitan says.

“It provides a lot of opportunity,” says Greg Groleau, Clark Construction vice president. “We can build vertical, one zone at a time.” With the central plant on the top of the building, essentially on floors 12 and 13, in a traditional ground-up approach, everything associated with the heartbeat of the structure would have been built last. Billboarding allows the team to get key vertical systems in place sooner. 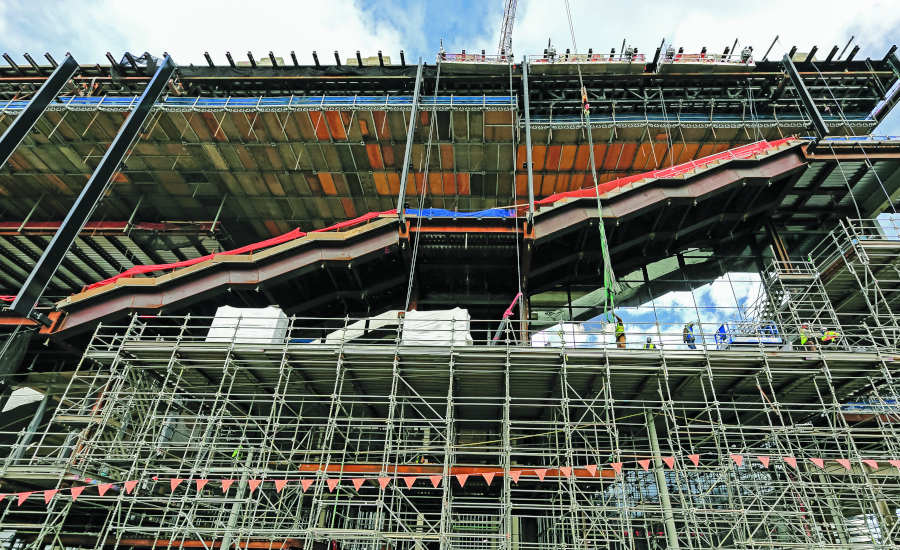 AT THE TOP: Moving the ballroom and featured spaces to the top floors allows for unique views.

The first steel in Zone 1 started going up in December 2019. By February 2020, subcontractor American Bridge was erecting structural steel about 100 ft over Interstate 5, with an eighth-floor truss helping crews build down to the fourth floor. Billboarding allowed Zone 1 crews to work on drywall and finishes in spring 2021 while steel continued to go up in Zone 5. Crews erected all the steel in one zone before moving on to the next, with bolting, welding and decking continuing across all zones.

The cantilever portion was sensitive to strength and deflection control, Beamer says, and required “dialing in from a deflection standpoint” to get the truss hung from near the top of the building to properly align with the multiple stories and street level below. “When we were putting up steel in Zone 1, we still had foundations and vertical concrete taking place [in other zones],” Groleau says. “We were pulling dirt out in Zone 5, while erecting steel in Zone 1 [and] building the loading dock under Olive Way. A lot of concrete work was taking place.”

At the height of construction, the site had seven cranes working at the same time. “The logistics and coordination were really complicated,” says Gary Smith, Lease Crutcher Lewis executive vice president. The project has included 380,000 cu yd of excavation, 95,000 cu yd of concrete, 10,000 tons of rebar and 21,000 tons of steel, roughly equivalent to the amount in three Eiffel Towers. 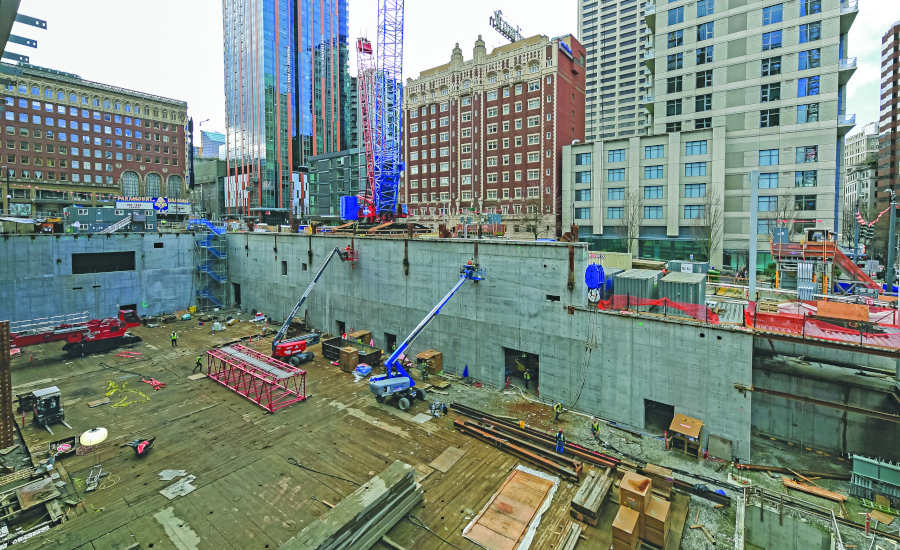 By the end of 2020, the “hill climb” curtain wall was largely in place, and Olive Way was rebuilt atop the stillunder- construction loading dock. The hill climb offers a picturesque way for visitors to navigate the center. Complete with glass windows hanging over the sidewalk, the interior space, clad in wood, includes stairs, escalators and opportunities for visitors to rest and plug in devices.

The billboarding process also allows crews to begin installing curtain wall before the steel is fully done. “It is a progression instead of starting low and building up,” Eitan says. “We start at one elevation and work across the job to full height.” 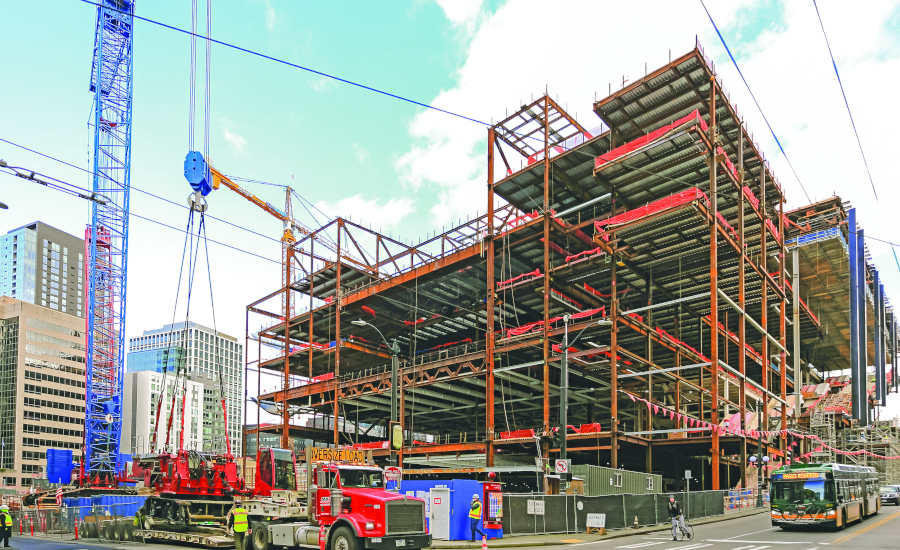 MULTITASKING: The billboarding construction strategy allows crews to finish the facade of one side of the addition while erecting steel at the other end.

Smith says billboarding saved a year from the project timeline. The benefits include using cranes—the 200,000-lb-capacity Manitowoc Model 18000 wouldn’t have fit on the site without billboarding— for trusses as heavy as 161,000 lb without building them piece by piece. Crews erected a temporary trestle over the loading dock to allow deliveries into the main building while keeping safe the crews building the loading dock below. The process allowed an earlier start on both hanging the curtain wall and installing the central plant.

But with those benefits comes the challenges of lining up systems across the five zones. “As we marry up Zone 1 to Zone 2 to Zone 3, making sure everything aligns is a unique challenge to billboarding,” Eitan says.

Billboarding also allowed for a different delivery of the curtain wall system, says Ellen Quigley, Clark Construction project executive. Instead of fabricating a floor at a time, fabrication of the system was done off site and then stored ahead of time, enabling crews to enclose the building quickly in 2021. They were also able to design eight custom curtain wall types, in different sizes and colors. “We are following the structure rather than fabrication as we climb the building,” she says. 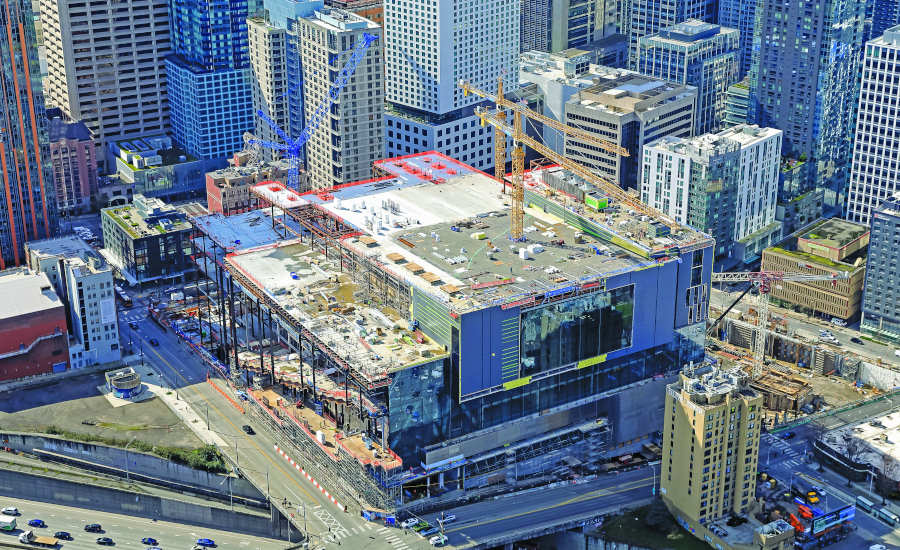 The logistical task was rerouting city buses that had used the site as a layover spot and relocating a Seattle City Light substation. To make that happen, crews had to completely reconfigure the bus loop and bridges through the site, build a ramp, close down a transit station and reroute buses to a flyover bridge. The months-long process systematically— and incrementally—shifted the entire transportation loop on the site to clear space for demolition and construction. The movement of the substation to two main electrical vault rooms under Olive Way not only freed up additional space but also allowed the project to have permanent power sooner.

Rerouting buses to clear space for demolition was just a first step. Crews had to relocate all of Olive Way to the north to build the new center’s loading dock under Olive Way. “Having the roadway relocated set us up for the beginning of construction,” says Groleau.

“This is the only time I’ve had an active roadway running through my construction site.”
—Greg Groleau, Vice President, Clark Construction

By removing an old truck tower and bridge and siting the new convention center loading dock below grade, Griffin says the team also was able to connect neighborhoods and ensure the building didn’t have a back side.

Eitan says breaking the project into two different operations, where the first segment happened under Olive Way and then building the other portion of the loading dock with the street operational again was a unique sequence.

Digging deeper meant dropping into a 90 ft hole from Boren Avenue. While excavating, crews needed to shore supports for an Interstate 5 structure and then reopen Olive Way to traffic. “This is the only time I’ve had an active roadway running through my construction site,” Groleau says.

The loading dock was designed so 18-wheelers can enter the convention center site from Boren Avenue and wind down a ramp 40 ft to unload directly onto the exhibit hall floor (the elevators are large enough to hold cars). The process spans not only under the convention center but also under Olive Way and the center’s underground portions across the street. Those areas—known now as Site B and Site C—will gain additional development in the form of office buildings and apartments in a separate project above the underground portion.

Griffin says the “spectacular ballroom” was very important, and the windows on the east side offer a key design element. Adding the signature room overlooking the outdoors and adding more natural light with the entire south side of the building clad in glass will help turn what could have been a traditionally dreary convention center design into a brighter, livelier space.

The interior highlights high-end regional materials, says Smith. Reclaimed wood from the former Honda Building on the site comes in the form of railings and local madrone wood that will help accent the finishes. The majority of the ground floor on the outside of the building will house retail spaces.