Brooklyn Bridge Park’s Squibb Bridge has 127 fewer years of existence than the borough’s iconic East River span, but the pedestrian crossing got lots of New York City attention since it was first opened in 2013 after being shut down twice—once for excessive “bounciness” and again due to rotting wood. Now its reconstruction, hopefully for good, is anything but a straightforward operation.

Even demolition work last month on the $6.5-million structure involved atypical obstacles—in this case, a pair of multistory residential buildings. “When the bridge was first built, the buildings on either side of it weren’t there,” says David Farnsworth, a principal and Americas tall buildings business leader at Arup, lead design firm on the new Squibb Bridge. “It was a big empty lot with plenty of staging space and plenty of access to get your cranes right up next to the bridge.”

“We started working through our options. You could either retrofit the bridge again, or you could decide to completely replace it.”

But the 10-story and six-story buildings that now straddle the bridge required the project team, with Turner Construction as construction manager, to adjust for tighter quarters, says Eric Landau, president of Brooklyn Bridge Park Corp., a nonprofit that built the 85-acre park over the past decade.

“The span had to be picked up and turned on Furman Street at almost a right angle … in between these two buildings,” he says. The team had to remove the two largest spans, each 120 ft long, in a single October weekend, Farnsworth says. “That was tricky—trying to do all of this in a very short weekend in order to minimize impact on traffic in the neighborhood,” he says.

Builders also had to strengthen parts of the old bridge’s rotted timber with steel channels before removing two long chunks of the structure in single lifts. These were done by a large 63,000-lb-load-capacity mobile crane, using tensioned suspension cables and a custom spreader bar to ensure the unit pulled up both ends of each piece vertically.

The lift also faced complications from a design detail on the original bridge: a pin in a slotted hole that could not be disengaged, Farnsworth says. That forced the crane’s crew to pull not only on the weight of the bridge, but also against that connection’s resistance.

The team later deconstructed those spans on stands on Furman Street and used a smaller mobile crane to remove other approach spans.

Much of that exercise may be echoed when the team assembles and lifts the new 450-ft-long steel and wood-deck bridge into place early next year, says Alex Reddihough, Arup senior structural engineer. Crews will install five sections and set them on the original bridge piers, he says.

“Basically it will be the reverse of what we did [in October] because the weights are effectively the same,” he says. 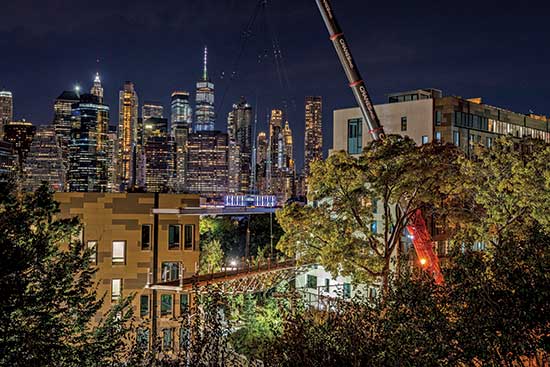 Removal of the two largest bridge sections took place over a single weekend in October.

The original bridge opened with fanfare thanks to an unconventional design—an aesthetically striking wood structure linking the Brooklyn Heights neighborhood to the newly constructed Brooklyn Bridge Park on the East River waterfront along a sloping alignment that crossed Furman Street. The original $4-million structure—named for Edward Robinson Squibb, a 19th-century pharmaceuticals magnate with a lab nearby who founded the company later known as Bristol-Myers Squibb—had another distinctive feature: a flexible black locust wood frame designed to deliver a slight bounce for pedestrians.

The bridge was open for more than a year when park corporation officials determined that it bounced far more than intended, Landau says. They closed the bridge and sued original designer HNTB for design flaws, later settling out of court for nearly $2 million. “The bridge is an example of a design risk that we took that didn’t work,” he says.

In 2015, the park corporation hired Arup to design a $3.4-million fix, including the addition of tuned mass dampers to lessen the vibration, and reopened the span in 2017, Landau says. But last year, inspectors found that excessive moisture caused advanced decay in the black locust wood, forcing yet another closure.

“We started working through our options,” Landau says. “You could either retrofit the bridge again, or you could decide to completely replace it.” 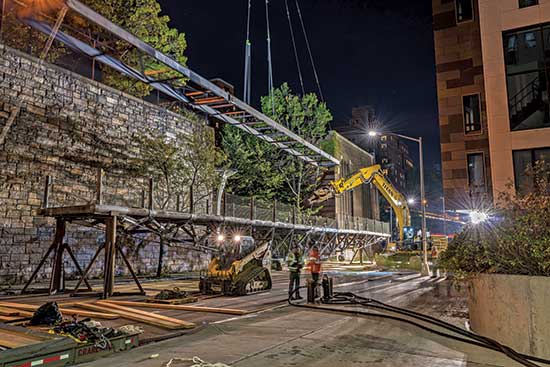 Parts of the old bridge’s rotted timber had to be strengthened with steel channels before long chunks were removed.

A retrofit installing load-bearing steel bracing would have cost $4 million, while a replacement preserving the original concrete piers and adding a new steel structure would cost $6.5 million, he says. Using the original supports in that design shaved about $2 million off the replacement bridge cost while keeping the same alignment, length and height—26 ft above Furman Street at its highest point, according to Landau.

The park corporation opted for the certainty of a steel bridge and the chance to “get away from the challenged history” of the original span, Landau says. A retrofit also would have kept the black locust wood, which was likely to continue deteriorating and require extensive maintenance, he says. “While it is unfortunate to have to completely remove something that we not only built but then spent millions of dollars trying to fix … we believe really that it is both in the park’s and the public’s best interest,” Landau adds.

“It was unfortunate. I’m sure that no one would have wanted it to happen this way,” she says. “But people in the community say they’re looking forward to the bridge and to a lasting solution.” 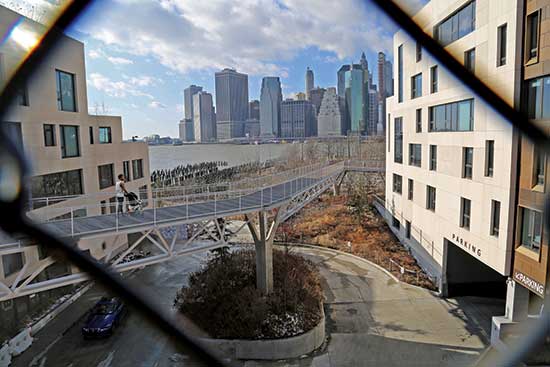 The design for a new bridge had to match the allowable weight limits of the existing foundations and piers. That set the stage for steel, Arup’s Farnsworth says.

“The old timber bridge was quite light, and we certainly didn’t have a load allowance for a concrete or precast or prestressed concrete bridge,” he says. Overall, the bridge will use about 22,000 lb of steel, Arup’s Reddihough points out.

Keeping the piers also created “geometric constraints” on how the bridge will connect to its supports, in part because the original structure used a catenary cable support system underneath. The new one will have trusses running along the deck’s underside, says Farnsworth. The design requires trusses that aren’t vertical; instead, they have a slope, some at angles of up to 30°, he says.

The need to minimize weight also led to the use of a wood deck, Farnsworth says. “We just didn’t have the foundation capacity to have a concrete deck,”  he says.

The team chose thermally modified white ash, a wood the park corporation already has on benches and “that we know and like,” Landau says. The design mimics features of the first structure, including a constant ADA-compliant decline of about 4.9%, Reddihough says. But it has new details, such as a metalized, corrosion-protection finish. “We wanted to avoid paint and future maintenance. It’s difficult to get up under the bridge at Furman Street,” he says. “We specified really durable materials throughout.” 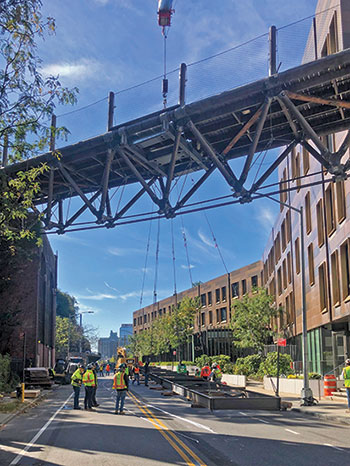 Another design element was accounting for a more congested neighborhood, Farnsworth says. “We’re trying to minimize work in the field given ... space constraints and the activity,” he says. That led to a major focus on prefabrication and preassembly in the design, Farnsworth says. “We’re designing the bridge to basically be assembled as a full span on the ground,” he says.

Steel prefabrication on the spans has begun, Reddihough says. The team is making adjustments to the piers in November and December, including removal of existing bearing cups and abutments, replacing them with new brackets and bearings. It also is strengthening the piers’ concrete slabs with fiber reinforced polymer strips on the top surface to accommodate the new loads.

The first of nine bridge sections is likely to arrive by late February, Reddihough says. “The nine spans will come in sequence,” he adds. They include the two main 120-ft-long spans, five 30-ft-long approach spans on the western side and two more spans turning the last 60 ft into Squibb Park. 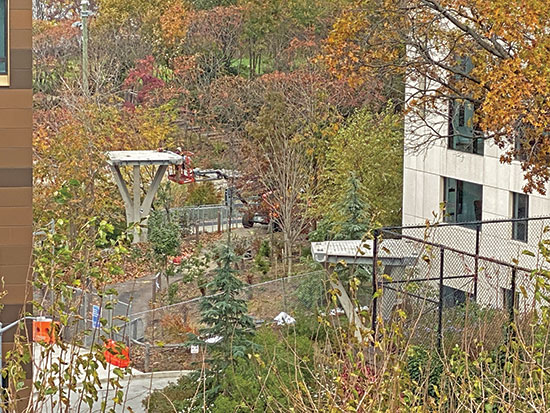 A worker preps a support for Brooklyn’s Squibb footbridge. Photo By Tom Sawyer/ENR

The main spans will each arrive in three 40-ft sections, which the team will bolt together on site, he says. The team also will preassemble the wood decking on the ground, Reddihough says. That will allow each lift—using the same single crane and spreader bar system—to set in place a nearly complete section. “In this way we’re ensuring quality control,” he says.

Final tasks after the lift will entail adding handrails, lighting and mesh infill panels, Reddihough says. The team will also reinstall the mass tuned dampers. “We’ve saved those dampers in the demolition— they’re pretty expensive items—and we are going to be retuning them and reinstalling them on the new spans to assure that dynamic performance,” Reddihough says.

When the new bridge opens next summer, it should close the book on one concept that didn’t pan out at a park with many unique design elements, according to Landau.

“Part of what makes Brooklyn Bridge Park so amazing is that everything we’ve done here from a design perspective is really different [than] parks around the country,” he says.