Older New York City denizens are driving one construction trend. “Over the past several years, we have seen a significant increase in the development of affordable senior housing … with a concentration in the outer boroughs of Queens, the Bronx and Staten Island,” Wetzel says.

That’s due to baby boomers reaching retirement age, with more than 2.5 million city residents older than 55. “Senior housing projects, such as those developed by the not-for-profit West Side Federation of Senior and Supportive Housing, provide opportunities for the AEC community,” Wetzel says.

But building these projects in the city’s dense environment creates several challenges for architects, engineers and construction firms.

“Senior and affordable housing projects are often in neighborhoods with a legacy of industrial land uses that are being rezoned to promote redevelopment,” Wetzel says. “Redeveloping a former industrial property—brownfields—carries the risk of encountering latent environmental impacts.”

But a growing population of retirees has one downside for the city’s construction sector.

“Retiring populations of senior engineers … are putting a strain on the labor market for experienced engineers and project managers to design, manage and construct projects,” Wetzel points out. “This apparent labor shortage carries over to the construction market for specialized services.” 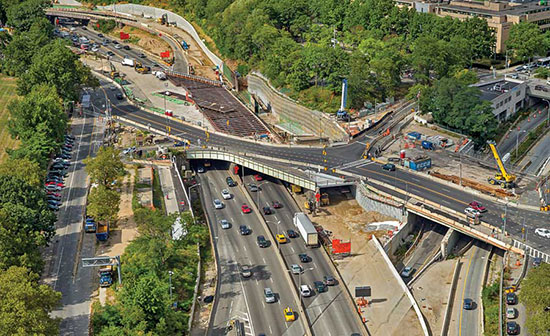 ​​​​​​​Hardesty & Hanover
1501 Broadway, New York City, 10036
CEO: Sean Bluni
Employees: 430
Founded: 1887
Roadwork Ahead: H&H has served the New York State Dept. of Transportation on the Kew Gardens Interchange Reconstruction for more than a decade. Work has included traffic study and analysis; environmental documentation; and preliminary and final design for the reconstruction, realignment or relocation of three freeways and their connector ramps—a total of 21 structures associated with the roadways, plus construction of new retaining walls. Major design tasks include geotechnical exploration, seismic analysis, wetland delineation, traffic analysis, bridge and highway design and construction staging. H&H used modular construction and creative staging to minimize the impact on traffic, reduce costs and accelerate construction. The project was divided into four separate contracts, with one now complete.