John Guzzon and Karen Weil
KEYWORDS border wall / Dept. of Defense / military construction / President Donald Trump / Southwest
Order Reprints
No Comments
The U.S. Dept. of Defense has released a list of potential military construction projects eligible for funding reallocation in order to support the national emergency declaration on the U.S. border with Mexico that includes 14 projects in Arizona, Nevada and New Mexico.
In February, President Donald Trump issued a Declaration of Emergency to redirect $6.7 billion towards the construction of barriers along the U.S. border with Mexico, including $3.6 billion to be reallocated from funds for planned military construction projects. The 14 Southwest projects identified on the list total $339 million. (Editor’s note: see table at end of article for a full list)
“Donald Trump’s attempt to take money away from our military to build a costly, ineffective border wall is illegal and unconstitutional,” U.S. Rep. Dina Titus, a Democrat who represents District No. 1 in Nevada says. According to a spokesperson for Titus, she will continue to work with colleagues to pursue “all possible legal and legislative remedies to prevent President Trump constructing this political vanity project.”
The Associated General Contractors of America recommended the Dept. of Defense target projects with award dates beginning in 2020 and the Dept. of Defense included that condition in its list, also known as section 2808 projects, released March 22.
Of the 14 Southwest projects identified in the list provided in late March by the Dept. of Defense, only three are scheduled to be awarded after Jan. 1, 2020: two in New Mexico and one in Arizona. Those three projects total $155 million.
In New Mexico, the most expensive post-2020 project shortlisted for reallocation of funds is the $85 million MQ-9 Formal Training Unit Ops Facility at Holloman Air Force Base. The other project is a $40 million information system at the White Sands Missile Range.
Capt. Kaylee Ausbun, chief of public affairs, Holloman Air Force Base, says the facility would consolidate MQ-9 Reaper remotely-piloted training squadrons into one building. She adds current training is spread out in various aging structures on base. Ausbun says 700 pilots and sensor operators are trained each year to operate the MQ-9 at Holloman Air Force Base.
U.S. Rep. Xochitl Torres Small of New Mexico, a Democratic member of the House Homeland Security Committee and the House Armed Services Committee, released a statement after the House’s failed attempt to override Trump’s veto of the bicameral, bipartisan vote to overturn his national emergency declaration, saying, “The president is willing to put our national security at risk by taking money from projects intended to improve the infrastructure and readiness of our nation’s military.”
The $40 million to construct a new Information Systems Facility at White Sands Missile Range, according to Torres Small, would be the first major military construction project in direct support of testing and evaluation at White Sands in nearly 20 years. The facility would replace a structure built in 1962 and allow consolidation of existing systems from 10 separate buildings into a single state-of-the-art, purpose-built facility.
White Sands Missile Range declined to comment.
The lone Arizona project would be at Ft. Huachuca in Sierra Vista and is described as a $30 million Ground Transport Equipment Building. The Ft. Huachuca public affairs office declined to comment.
U.S. Rep. Ann Kirkpatrick of Arizona says funds for construction on military installations are effective and needed, while border walls or barriers are ineffective and costly.
“As a member of the House Appropriations Committee—specifically, the Defense Subcommittee, I will do everything possible to fight President Trump’s attempts to divert money from Southern Arizona military projects. Ft. Huachuca and Davis Monthan are essential assets in our national security system and must not be compromised by cuts in high priority infrastructure improvements,” Kirkpatrick says.
On April 4, the U.S. House filed a lawsuit to stop the reallocation, joining more than seven other court cases which had previously been filed.
If none of these lawsuits are successful, or before courts can stop them, the Joint Staff and United States Northern Command will examine a list of specific border barrier construction projects provided by the Dept. of Homeland Security, and “conduct a mission analysis on which border barrier projects would support the use of the armed forces,” according to the Dept. of Defense.
When releasing the list of projects, the Dept. of Defense outlined that if the fiscal year 2020 budget is enacted on time as requested, “no military construction project used to source section 2808 projects would be delayed or canceled."
(Editor's note: This article was updated Sunday, April 7, 2019 at 12 p.m. adding Rep. Kirkpatrick's comments)
Southwest Projects On 2808 Funding Pool List
Table by ENR Southwest from information provided by the Dept. of Defense. 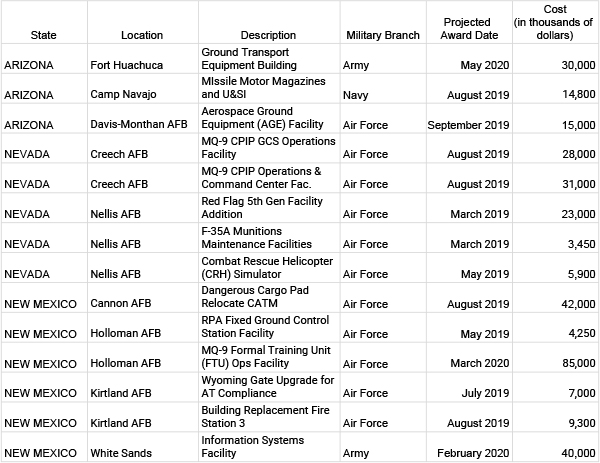 DOD Aims To Shift $3.6B From Military Projects to Border Wall