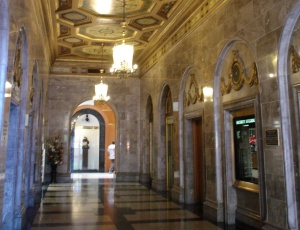 Meanwhile, the interior of the Security Building Mezzanine Center, which serves as a training and development center for County employees, was remodeled with all new walls, ceilings, flooring, doors, electrical and plumbing.

As an added challenge, all phases of the project occurred while the building remained occupied and operational.

Because the structure is on the National Register of Historic Places, the contractor restored the original look of the exterior using re-fabricated stone fascia and window systems that mirror the original windows, yet add energy efficiency.

More than 150,000 sq ft of interior space was renovated. Crews were able to salvage all of the original door frames and jams, and the original maple flooring was refinished throughout the facility.

Due to the high quality of work performed by the contractor, what was originally just an eight-month, single phase project to replace the mechanical and electrical infrastructure eventually flourished into a five year, six-phase partnership as the County added additional scope to the project.

When crews removed a drop-ceiling installed in the 1980’s, they found long-forgotten yet beautiful artwork painted by Mexican artisans in the 1930s. The project team re-worked the building systems to allow this gem to be left uncovered.

The judges felt the building’s user groups, which include Arizona State University, the Sheriff and other county departments, will be better served by this attractive and functional renovation.