This website requires certain cookies to work and uses other cookies to help you have the best experience. By visiting this website, certain cookies have already been set, which you may delete and block. By closing this message or continuing to use our site, you agree to the use of cookies. Visit our updated privacy and cookie policy to learn more.
Home » Best of Arizona: HOV Bridges Hurdle Obstacles - Including Their Own Substructure
SouthwestSouthwest Construction ProjectsFeatures

Best of Arizona: HOV Bridges Hurdle Obstacles - Including Their Own Substructure 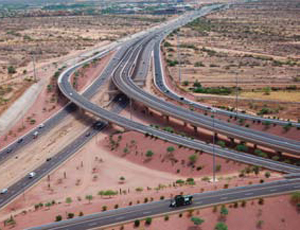 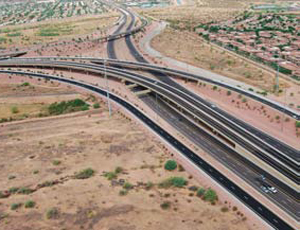 This project connects a 7-mi extension of high occupancy vehicle lanes along the SR 51 corridor to SR 101L via freeway-to-freeway HOV ramp connectors. Vertically, the ramps must ascend/descend rapidly to minimize length and cost. Horizontally, they must cross over mainline freeway traffic lanes at very severe skew angles. A previous firm’s attempt at the design called for a simple but expensive fly-over connector bridge. Stanley Consultants reduced the bridge length by 33% or 1,277 ft and reduced costs by $5.5 million.

The new design configured the precast prestressed concrete fly-over bridges using only two specified lengths for all spans. Design and construction was greatly simplified by using three nearly identical, level, post-tensioned straddle bents to carry the bridges over the freeway. However, each straddle bent supports only one of two bridges passing over it. Pedestals constructed atop the straddle bents transfer just one superstructure load to the substructure. The other superstructures do not touch. This separation technique is the first of its kind in Arizona.