This website requires certain cookies to work and uses other cookies to help you have the best experience. By visiting this website, certain cookies have already been set, which you may delete and block. By closing this message or continuing to use our site, you agree to the use of cookies. Visit our updated privacy and cookie policy to learn more.
Home » Best of Arizona: Banner Health Del E. Webb Medical Center Expansion
SouthwestSouthwest Construction ProjectsFeatures 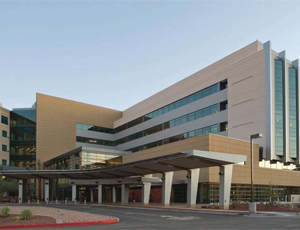 The new expansion consists of a 205,136-sq-ft, six-story patient tower expansion on the existing Sun City West hospital campus. This tower houses a new larger emergency department on the first floor, new invasive services including OR, PACU and ICU on the second floor, 36 med-surg beds on the third and fourth floors and shell space for future beds on the fifth and sixth floors. The project also includes significant site work, a kitchen remodel and an expansion to the existing central plant. The project increases capacity from 330 beds to 403, with additional shell space for up to 500 beds. Natural Arizona sandstone at the base of the building extends from the exterior into the lobby space, echoing the desert-inspired interiors. A healing garden surrounds the patient drop-off area. The magnitude of the project and the team’s early use of BIM for successful coordination impressed the judges.