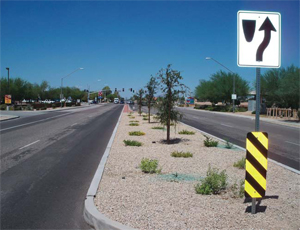 The project installed 4 mi of 66-in. storm drain pipe down the center of 67th Avenue. This major arterial street, which divides the cities of Glendale and Peoria, included average daily traffic volumes of over 30,000 vehicles. A new storm drain system alleviated persistent neighborhood flooding during the summer monsoons. Several widened intersections were constructed, adding median islands and right-turn lanes. Additional scope of work included landscaping, sidewalk, curb, gutter, conversion of open trench irrigation to underground pipe, taking overhead electric power and installing underground, upgrades to street lighting and installing new waterlines. In a move that saved Glendale $1 million, the team used a smaller, 24-in. pipe at the beginning of the line where the water flows were less, and progress to larger pipe sizes as the water flows increased.

The judges were impressed by the team’s community spirit in working with the businesses and neighbors, even when construction involved having to remove residential walls that had been previously built in the public right-of-way.