A three-story high, wild maze of tube steel with pieces weighing as much as 5,000 lbs is currently under construction at the Children’s Museum of Phoenix. 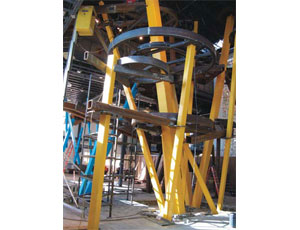 The Schuff Perini Climber, located in the Children's Museum of Phoenix, is being built through the donations of over 30 construction firms.

Known as the Schuff Perini Climber, the project’s original educational and physical concept has morphed into a much more dramatic exhibit due to the enthusiasm of the construction community. The climber gradually evolved into a gigantic steel labyrinth that involves Perini Building Co., construction manager; Schuff Steel Co., the steel fabricator and erector; Ganymede Design Group; Bakkum Noelke Consulting Structural Engineers; Draft-Tech, Structural Detailers; and 37 other subcontractors and vendors.

“There is no repetition and every piece of steel is placed at an angle,” says Todd Brush, Schuff’s lead project coordinator. “The Climber is one of the most intricate structures Schuff has built.”

Schuff is donating its professional services, steel fabrication and erection, plus all 50 tons of steel on the project. Perini is donating project management, construction expertise, on-site supervision and has lined up over 30 subcontractors and vendors to donate time and materials. Approximately 75% of the project is being donated.

The Climber uses unexpected objects, such as a claw-footed flying bathtub with steel reinforced wings, a rocket ship with real car door fins and an 18-ft long plank that leads to a school of flying fish made from recycled items. With four options to ascend the Climber, children can crawl, walk, zigzag and climb on tube steel columns and beams, ladders, plywood ramps, a water park slide lined for traction, or even a see-through fiberglass grating. To secure the under-aged explorers, the entire structure is draped in stainless steel-woven wire netting.

The project is due to open late January 2010, approximately five months from groundbreaking.