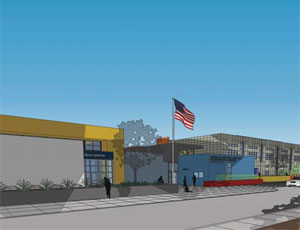 Image: Pugsley Simpson Coulter Architects
The Shirley and Bill Wallin Elementary School is underway in Henderson and will be complete by August.

The Clark County School District contracted CORE for the 75,176-sq-ft, two-story school. Situated on a 10-acre site, Wallin Elementary is composed of four buildings: two classroom buildings, a multi-purpose room and an administrative building. The plan calls for tilt-up walls.

Construction began in July and is scheduled for completion in August 2010. Pugsley Simpson Coulter Architects is the architect of record for the $16.6-million project.

CORE also completed construction on Mark L. Fine Elementary School at 6635 W. Cougar Ave. in Southwest Las Vegas. The Clark County School District contracted CORE for the project. The 68,875-sq-ft, single-story school is situated on 30 acres and includes four blocks of classrooms, a multipurpose room, library, enclosed exterior courtyards and playgrounds. The plan called for reinforced masonry walls with structural steel, single-ply roofing and a central plant for heating and cooling. CORE began construction on the elementary school in September 2008. JMA Architecture Studios is the architect of record for the $18.7-million project.