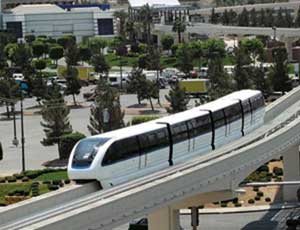 Estimated to carry 40,000 passengers a day, the monorail ran into trouble when, on Sept. 1, a 20-in., 60-lb rubber steering tire broke off during transit. Officials replaced the wheel assemblies and reopened the automated line on Sept. 7, only to shut it down again the next day when a 2-lb., 6-in. driveshaft flange fell off a train and struck the 750-kV rail track, causing a small electrical explosion.

Lower-than-expected ridership and cash-flow woes subsequently plagued the monorail, which hopes to lower its bondholder payments through the reorganization.