Last month, the University of New Mexico received LEED gold for Castetter Hall Phase I on the Albuquerque campus. 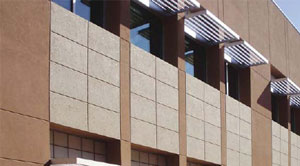 As the 110-year-old school’s first LEED-certified project, it was a satisfying moment for campus officials. Though other campuses have reached similar milestones, UNM has dramatically accelerated its green building program, with $220 million in active projects.

The school has 31 projects over $500,000 and 62 smaller projects, most in the construction phase, says William Turner, director of UNM’s office of capital projects.

The initial catalyst for greening the 600-acre campus was a pair of executive orders from Governor Bill Richardson stipulating that all new state buildings over 15,000 sq ft need to meet LEED silver at minimum and that all buildings must reduce energy consumption by 20% by 2020.

As if that wasn’t enough, UNM formed a carbon neutral task force in June 2008 and has signed on to various initiatives to reduce carbon emissions. According to the university’s physical plant department, in just the first 10 months of following its new energy conservation initiative, the campus reduced energy usage by 13.4% and reduced carbon dioxide emissions by 13,603 metric tons.

“All of these initiatives fit in with our values of what constitutes good design,” Turner says. “In today’s world, good design has to have a component of sustainability to it. Otherwise you didn’t really do good design.”

The $4.3-million Castetter Hall South Addition, Phase I adds 15,867 sq ft of space plus a greenhouse for the school’s biology department. An additional 22,000-sq-ft phase is planned.

The building will consume 31.5% less energy overall than traditional buildings on campus. “Considerable care was given to the south-facing addition to maximize the amount and quality of natural light, thereby reducing the need for artificial light,” says Dave Cook, AIA, principal with Albuquerque-based SMPC Architects. “In order to control the increased solar gain, high performance glazing and solar shades were incorporated to reduce air conditioning loads.”

Research laboratories will allow students and faculty to work on health-related problems affecting the world and New Mexico. Because labs are such high energy consumers in order to keep interior air clear of contaminants, Castetter’s mechanical systems filter and re-circulate already conditioned air as much as possible.

“The labs are modular, stacked vertically for flexibility and economy and have fully-integrated structural, mechanical and electrical systems,” Cook says. Low-flow laboratory flume hoods that automatically cut back the amount of exhaust air during inactive times were used.