Crews have begun steel erection at the Maricopa County court tower, which is being built to meet or exceed LEED-NC v2.2 silver in downtown Phoenix. 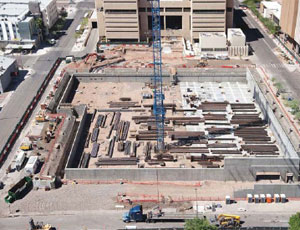 Photo: Patti Reznik Photography
Crews have begun steel erection on the 14-story building, which is aiming to meet or exceed LEED-NC v2.2 silver.

Topping off for the 14-story building is expected by May, with the $350-million project due for completion in 2012. The design calls for two additional levels below grade.

Todd McMillen of Gilbane Building Co. of Phoenix, the construction manager at risk on the project, says he’s proud to be working on what is considered a 100-year facility.

Gilbane has an in-association agreement with Ryan Cos. of Phoenix for about 30% of the project managerial duties, McMillen says. Gilbane has built more than 85 criminal justice facilities in the country. The construction costs for the 695,000-sq-ft tower are expected to be $259 million.

Security in the tower is of utmost importance, and design features range from structural areas capable of progressive collapse—so the entire building isn’t lost in a severe attack—to inner circulation patterns that will keep judges, victims, prisoners and the public away from each other outside of the courtroom.

�It may be the first court in the country to have a room behind every courtroom for victims,� says architect Dave Evans, AIA of Gould Evans Associates in Phoenix. The Phoenix office of AECOM also worked on the design.

Vertical transportation is key to circulation patterns. �It is like a puzzle,� Evans said. �It�s an intricate process.� Features include a new vehicular sally port and central holding area, campus-wide control center, in-custody holding areas/circulation systems and separate entrances for staff and the public.

Judges� chambers also connect to individual courtrooms. Traditionally, judges are housed on one floor and trade off courtrooms. A jury assembly room will serve the entire criminal court complex and will be fitted with state-of-the-art technology which will allow the tower to serve as the hub for the County�s campus-like approach.

McMillen says the court tower is being designed as it is being built. There are five packages in the project: relocation of underground utilities and demolition of the site�s existing parking garage, foundation, superstructure, core/shell and interior. Building information modeling is being used, as well as design-assist subcontractors for design input and early material procurement.

From the outset, Gilbane�s virtual design and construction engineer has worked with the architect�s staff.