An estimated $12.2 billion in federal stimulus funding should help Florida shore up some of the holes in the state budget and put thousands of Floridians to work. That was the message from Gov. Charlie Crist when he hailed the passage of the federal stimulus bill in mid-February and just days later when he announced his $66.5 billion 2009-2010 budget on Feb. 20. 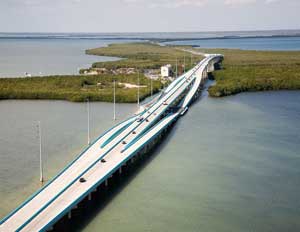 Photo: PB Americas
The Florida Department of Transportation plans to make full use of the roughly $1.4 billion in stimulus funding it will receive.

According to a Feb. 20 statement accompanying the release of Gov. Crist’s budget, the stimulus will add approximately $4.7 billion in revenues for 2009-10, thus reducing the amount of future cuts that had been widely expected. Approximately $3.2 billion in stimulus funding will be utilized within the state’s current fiscal year.

The state legislature recently held a special session where it cut an additional $2.5 billion in state spending to close a gap in the current year’s budget, due to lower-than-expected state revenues. In the past two years combined, the state has cut approximately $7 billion from its budget.

The Florida Department of Transportation will be the biggest recipient of construction dollars. FDOT officials estimate that the stimulus will deliver roughly $1.4 billion in additional work to the state. That compares to the $6.9 billion in projects that FDOT had earlier listed as “ready-to-go.”

Dave Lee, in FDOT’s Office of Policy Planning, says the department has been coordinating with its district offices about priority projects throughout the legislative process, and is still finalizing a list of stimulus projects.

The Department is using seven factors to prioritize its projects eligible for stimulus funding. These include: have been previously deferred by the state; are tied to concurrency where development is being held up; have the potential to generate revenues; are geographically balanced; provide congest relief; are located in economically distressed areas; and can be completed within three years.

“We plan to make sure that we don’t lose out on any of the funds available to Florida,” Lee says. “And we hope to actually use some that other states can’t, in that ‘use-it-or-lose-it’ provision.” Lee indicates that the agency has to have projects totaling roughly half of the stimulus total “obligated” within 120 days, and the remaining stimulus projects within one year. Obligation indicates federal approval for a project to move forward.

FDOT, which has been a national leader in the adoption and use of design-build, will likely use this delivery method for some of its stimulus projects.

“That would be a good way to go on a lot of these,” Lee says. “You’re going to see a pretty good range of smaller and bigger-sized projects.”

The governor’s office and FDOT estimates that the additional stimulus funding will “create or retain” an additional 24,200 jobs.

While the state’s list of stimulus projects is still being finalized, some major projects are stepping to the forefront. In Tampa, the Hillsborough County Metropolitan Planning Organization pushed the $463 million Interstate 4/Crosstown Connector project as its top priority. The road would connect I-4 with the Port of Tampa and the Selmon Crosstown Expressway.

Overall, the stimulus funding saves FDOT’s overall spending from decline. According to Dan Cashin, FDOT budget officer, reductions in gas-tax revenues, vehicle sales tax and real estate-related documentary stamp fees have driven the agency’s overall budget down significantly. Gov. Crist’s budget – which does not include the new stimulus funding – calls for $7.1 billion in total transportation funding in 2009-2010, down from the current year’s $8.2 billion total.

Cashin explained that, due to its timing, the legislature will need to incorporate FDOT’s stimulus funding into the current year’s budget.

For FDOT, the stimulus funding comes on the heels of Gov. Crist’s own Accelerate Florida program. Enacted last fall, that program accelerated approximately 179 projects totaling about $1.4 billion in construction funding by moving up their start dates by between one and five months.

“We have a governor who has really helped lead the fight to get more federal dollars from Washington,” says Dick Kane, public information officer with FDOT. “He’s been on the forefront to ensure that we get more money for transportation, because those transportation improvements will equal more jobs for people.”

Other public works construction will get a boost. According to Bruce Kershner, executive vice president of the Underground Utility Contractors of Florida in Longwood, the state is expecting to receive about $134 million for wastewater projects and as much as $90 million for drinking-water facilities.

“For wastewater projects, that’s a drop in the bucket,” Kershner says. Half of that amount will go to grants for small and financially disadvantaged communities, he added.

Those representing the vertical building markets were less optimistic about the impact from the stimulus law on their constituents.

Mark Wylie, president and CEO of the Central Florida Chapter of Associated Builders & Contractors in Orlando, says the impact from the stimulus “will be marginal in Orlando, from what I can tell. The total amount of infrastructure spending appears to be less than 10% of the total package, and when that is divided out over 50 states … it will not have much of an impact on construction activity in any one area.”

Wylie further figures stimulus funds would only cut the rate of unemployment by less than 1%. “That will be great for the people who get the jobs,” he said, “but it will not have much impact on the whole industry.”