A sinking economy that has meant fewer tourists in Central Florida and dropping hotel room rates has led to a nearly 5% decline in tourist development tax revenue during the last six months, significantly damaging the City of Orlando’s plans for a $425 million performing arts center and a $175 million renovation of the Florida Citrus Bowl. 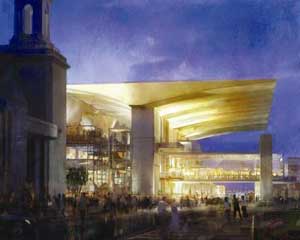 “We are currently reviewing cost-reduction measures including timing, project schedules, site configuration and other opportunities to reduce the overall project budget,” Orlando Mayor Buddy Dyer says in a written statement.

The projects are part of a three-venue, downtown improvement package, totaling more than $1 billion, with $540 million funded with tourist tax dollars. Other money comes from state sales taxes, which are also down; downtown Community Redevelopment Agency bonds; and private philanthropy.

Turner Construction Co. of Orlando is the program manager for the $480 million Orlando Events Center, which was designed by HOK Sport of Kansas City, Mo. A group led by Hunt Construction Group of Tampa is progressing on its $280 million general construction contract. Project officials broke ground on the arena in July 2008.

The events center is funded partly with $270 million derived from tourist development tax bonds issued in March 2008. The city guaranteed $170 million of the bonds and the Orlando Magic basketball team the remaining $100 million.

As a result of the drop in tourism dollars, the performing arts center and the stadium renovations projects could be delayed.

Orange County announced in mid-January that tourist tax collections were down in November by 13%. It is adjusting the fiscal year 2009 budget to reflect a 5% decrease from last year but acknowledges further adjustment may be required as the year progresses. The State Revenue Estimating Conference has projected a 10% decrease this year.

Even the 5% drop would severely affect the city and its performing arts and stadium projects, which rely on $130 million and $140 million, respectively, in tourist tax bonds.

Katherine Ramsberger, president of the Dr. P. Phillips Orlando Performing Arts Center, sent a letter to supporters, who have donated $86 million collectively to the center, saying that the organization “may need to make adjustments to our programs and plans. As the city reviews its position, we also are taking steps to identify areas where greater efficiency and savings will be achieved while still maintaining the highest level of project integrity.”