This website requires certain cookies to work and uses other cookies to help you have the best experience. By visiting this website, certain cookies have already been set, which you may delete and block. By closing this message or continuing to use our site, you agree to the use of cookies. Visit our updated privacy and cookie policy to learn more.
Home » Trial Postponed for Defendants In Fatal Ground Zero Fire
New York Construction NewsNew York

The Deutsche Bank fire trials have been postponed, ENR has learned. 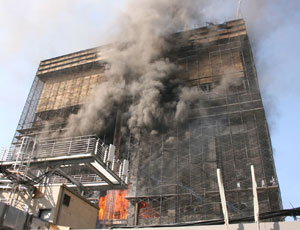 The trial of three former contractor employees indicted in connection with a fatal 2007 fire at the vacant Ground Zero high-rise was originally set to begin Jan. 18, but that no longer is the case, says a spokeswoman for one of the defense attorneys. No new date has yet been set.

Parties in the case are set to meet at a pre-trial conference on Feb. 4, at which time a new date will be determined, “presumably within a short time,” the attorney’s spokeswoman says.

She did not disclose information about whether the postponement originated with New York state Supreme Court Judge Rena K. Uviller, prosecutors or defense attorneys. No reason was given, either.

The Galt firm also was indicted. The officials were charged in 2008 with a total of seven counts of second-degree manslaughter, criminally negligent homicide and second-degree reckless endangerment.

The spokeswoman says that the three defendants are currently set to be tried together, “although there are severance motions pending.” She says the trial is expected to last three to four months.

The $300-million demolition of the former 41-story high-rise, owned by the Lower Manhattan Development Corp., a quasi-public city agency, is set for completion this month, with the building site to be transferred later this year to the Port Authority of New York and New Jersey, which owns the rest of the 16-acre World Trade Center site, according to published reports.