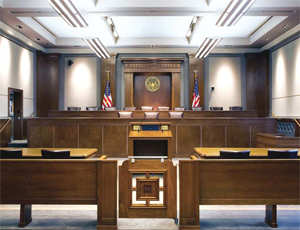 The William Kenzo Nakamura United States Federal Courthouse was the first building in the West designed exclusively as a Federal Court House. The 13-story historic facility was completed in 1939; includes a basement, an upper and lower penthouse, and covers an entire city block in downtown Seattle. In 1998 the General Services Administration and the US Court of Appeals began the process of renovating the 190,000 sq ft building to renew and upgrade it for the next 70 years,

GSA chose Mortenson, Bellevue, as the construction manager partner in November 2005 to provide pre-construction and construction services for the project.

A significant part of the original Nakamura scope included lowering approximately 20% of the existing building core foundations to allow construction of a grand entrance pavilion with ADA access at the lower day-light level of the building. This required supporting the 13-stories of concrete building above, removing the basement concrete columns and foundations, then adding new foundations and new column extensions; while integrating new 7-story shear walls and foundations integral to the lowering of the core. Mortenson and the design team used BIM technology to study multiple design options, constructability scenarios, activity phasing and logistics, feasibility and costs. GSA and the Court, with support from the entire team, decided that the budget constraints and projected costs were far too great to undertake the risk of the lowering of the foundations. Still, the seismic upgrades were required and the team employed BIM tools for the design, construction and scheduling of this project scope. After realizing the project could not be completed for the original estimate of $46 million, the team reworked the contract. Final cost of the project was $71 million.

This project was also designed to meet LEED Silver standards and is in the review process.