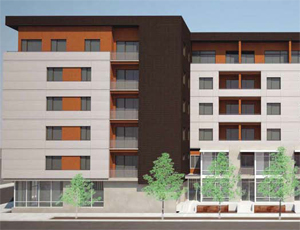 The $16 million LEED-certified project was required to have at least 20% of its workforce made up of women, minorities and emerging small businesses which the Portland Development Commission verified. It also helped finance the apartment building.

The project team worked to obtain a workforce made up of 84.7% MWESB-certified companies.

Budgeting constraints required the team to consider several skin materials and to convince the city of Portland to accept the decision. First was a CERACLAD panel—a manufactured rain-screen siding—along with some HardiPanel siding.

The city’s initial review was positive, but ultimately the first building skin option was rejected. The final result, which brought the project into budget, was to delete all the brick and have a combination of two types of metal panels and HardiPanel on the exterior of the building.

The sound ratings between floors also presented problems. The project design called for exposed concrete slabs in the living units, but ultimately a more cost-effective way had to be developed, and Marmoleum and carpet were used in key locations.

Also, to help minimize the architect’s punch list at the end of the project and complete the job in a more streamlined way, general contractor Yorke & Curtis, Portland, pre-punched the project weeks in advance. The pre-punch lists were then posted on the door of every room in order for subcontractors to complete them ahead of time.

Because Shaver Green is one of the largest buildings in the neighborhood, the design team was sensitive to its scale. The design strategy for the exterior included dividing the mass of the building into three parts. Rather than a traditional division of base, middle and top, the building is framed with a dark-colored L shaped section at the perimeter. A lighter-colored center section sits within it, separated by the recessed balconies.

A two-story section on the east side of the building, consisting of natural poured-in-place concrete, faces the busiest street.

To provide privacy, the building is recessed from the sidewalk, raised 2 ft above it and buffered by landscape planters made of unfinished steel plate. The mix of materials, colors and shapes is intended to reveal the building as a series of smaller volumes nested within a larger frame, reducing its scale and impact on the surrounding neighborhood.