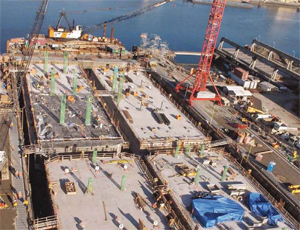 The designers and builders of the Hood Canal Bridge, which joins the Kitsap and Olympic Peninsula near Seattle, is the longest floating bridge over salt water in the world.

The six year project called for:

• Replacement of the east half of the Hood Canal Floating Bridge.

• Replacement of both east and west fixed approaches.

• Replacement of both east and west transition trusses.

• Widening of the existing west half roadway.

• Retrofit of the electric/hydraulic operating machinery and control systems for the existing west half draw span.

Crews fabricated many parts of the structure offsite in Tacoma, including the individual pontoons and electrical components. They also built the elevated roadway on the pontoons and installed the operating machinery for the new east draw span.

Further onsite work took place during a minimal 34-day closure to traffic during May. That’s when the old existing east half of the floating bridge was cut apart, unmoored and floated away, and the three subassemblies of the new east half, each about 900 ft long, were floated in, moored and joined.

The east and west 280-ft span trusses, which transition from the fixed approaches to the floating bridge, were also replaced during the closure. General contractor Kiewit/General, Poulsbo Wash, opened the bridge to traffic 11 days early.

During the course of the project, the team focused on three areas to ensure safety. First was to modify the hazard-recognition process to provide for greater crew participation. Second was to introduce three computer-based foreman training modules to train existing and new foremen, and third was to introduce two computer-based supervisor training modules to sharpen the skills of supervisors managing work in the field.

Joining the individual pontoons and subsequent construction of the elevated roadway, as well as operating machinery, was complicated because of the buoyant foundations floating in seawater. Survey control for these operations utilized an innovative adaptation that uses using 3-D/3-point resection survey software that doesn’t use the Earth’s gravity for a reference vector.