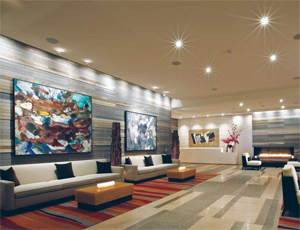 The site for this $150 million project was bound on four sides with unusual construction challenges. Demolition of the existing garage required the contractor to saw cut and support existing structures on the north and south, and to fill areaways and a tunnel under 1st Avenue (Old Seattle Underground).

Surrounding the site were hundreds of condos and apartments. On the south was a historic brick building open 24/7, to the east the WaMu tower was under construction, and to the west was a City Light substation. Value engineering was essential to meet the budget. The team reduced the budget by $8.5 million while maintaining the design intent.

The demolition and shoring phase was among the most complex ever attempted in Seattle. As an example of the challenges, installing the tie-backs in the east wall (holding up First Avenue) required Lewis to both shore the floor slabs for the heavy drill rigs and demolish others for access.

From Lower Union to Upper Union Lease built a freestanding stair with 103 steps. It is held in place by a structural concrete beam with wide concrete steps attached at the bottom. The beam was cast-in-place in three pours. A 20-in water SPU water main runs through the building. This had to be replaced during the project and incorporated into the new design.