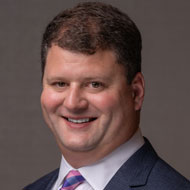 Ryan Hutchins is an executive vice president and leads business operations in Mexico, the Southwest and Ohio; geographical areas that are strategically important to Gilbane’s Vision 2025 plan and future growth. In his prior role, he provided hands-on leadership to business development teams and collaborated with divisional leaders on sales throughout Gilbane’s footprint. Ryan was named executive vice president in 2019 and is the executive sponsor of the Gilbane Young Professionals (GYP). He has been honored with a BD+C’s 40 Under 40 Award, the Banker & Tradesman’s New Leader in Massachusetts Award, and was named to both the 2013 Engineer News Record’s Top 20 Under 40 and the 2015 Boston Business Journal’s Top 40 Under 40 lists.