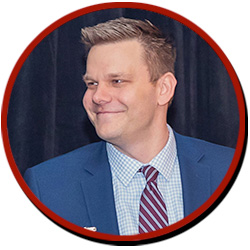 Kyle Roberts leads one of the largest civil engineering teams at Burns & McDonnell, the federal and aviation group. He oversees design of critical infrastructure solutions for some of the U.S. Air Force’s major weapons systems, including the F-15, F-16, F-22 and F-35 programs. Of the runways he has planned and designed, five of them are among the 150 longest runways in the world. Roberts has worked on five continents and in more than 15 countries throughout his 16-year career, including in-country stints for engineering work in Iraq during Operation Iraqi Freedom in 2006 and 2018 and in Afghanistan during Operation Enduring Freedom in 2007. He has worked throughout the Middle East, the U.K., Australia, and Guam supporting projects for U.S. military collaboration.