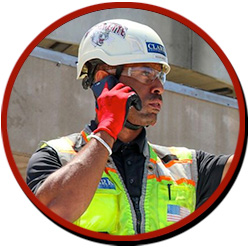 Growing up watching his father fix cars and houses in Philadelphia, Keon quickly realized he wanted to work with his hands. A voracious learner, particularly of mathematics, West earned his bachelor’s degree in engineering, with a minor in businesses and economics, from Lafayette College, and joined Clark after graduating. In 14 years with the Clark, West has worked on award-winning projects, while seeking to make a difference in the careers of burgeoning engineers and craftworkers. During his first decade with Clark, West led field efforts on high-rise residential buildings, commercial office buildings, and hotels throughout the Washington, DC area. In 2018, he moved to California to join the $1.4 billion Chase Center project, where he was the superintendent responsible for the entire arena bowl. Currently, Keon oversees the construction of the San Diego State University (SDSU) multi-use stadium. West is supporting the budget development, managing constructability issues with the design team, and organizing schedules with subcontractors. West is also spearheading the construction efforts.