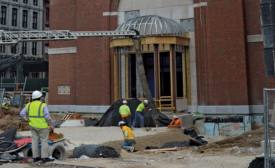 Just as the Broadway hit “Hamilton” packs the epic biography of Founding Father Alexander Hamilton into a three-hour rap opera, the $120-million Museum of the American Revolution under construction in Philadelphia ambitiously jams the eight-year war into a tight urban site.