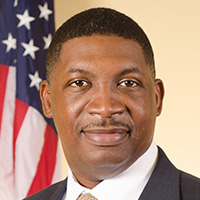 Shawn Wilson was appointed Secretary of the Louisiana Department of Transportation and Development (DOTD) by Governor John Bel Edwards in January of 2016 and is now serving as Secretary for a second term. He has more than 15 years of executive service at DOTD. Under his leadership thus far, DOTD has ushered in project finance and project innovations, including Public Private Partnerships and Construction Manager at Risk projects. During his tenure as Secretary, DOTD has awarded more than $4.6 billion in construction projects.

Wilson is Vice-Chair of the Transportation Research Board (TRB) Executive Committee and is the President of the American Association of State Highway and Transportation Officials (AASHTO).

Shawn and his wife, Rocki, reside in Lafayette, they have two children, one son-in-law, and two beautiful grandchildren.